Today we were in the sultanate of Brunei.  On the island of Borneo, which is the third largest island in the world, there are three separate countries.  They are Malaysia, Indonesia and Brunei.  Brunei has only 1% of the land area of the island and has the largest oilfields in Southeast Asia.  It is a very rich country due to the oil found here – and there are no beggars on the streets. The Sultan of Brunei’s $400 million residence (which you cannot visit) is located on the banks of the Brunei River.  It has 1788 rooms, 257 bathrooms, 564 chandeliers and a 5000 seat banquet hall. When the Sultan travels to other countries, a whole entourage accompanies him.  They even bring their own cars!  He pilots his own 747.

Today our visit was different from the last time we were here.  That is because it is Friday, the holy day for Muslims.  So, there could be no visiting the mosques and everything in the towns and cities closed from 10 – 2.  We decided to go out to the port building after breakfast to update our devices and explore the small marketplace.  The internet was slower than the ship though, so we went back inside for a while, had lunch and then wanted to take the 1:15 shuttle to town.  Well, they had changed the schedule and it wasn’t leaving until 1:45.  Since it was a 45 minute trip on the shuttle, the couple we were going to town with,  Graham and Shuna, suggested a taxi.  We found one with a driver that wan’t taking off until 2 PM and headed for the Bandar Seri Begawan city center – about 16 miles away.  It didn’t take us 45 minutes, largely because there was virtually NO traffic due to the 10 – 2 prayer time.

The culture here is very strict and even when not visiting mosques, women are supposed to keep their shoulders and legs covered.  It was pretty hot to be that covered up, but as we have said before, we do need to respect their culture.

The sultunate became Southeast Asia’s first country to adopt the Islamic penal code at a national level.  This hasn’t exactly helped with tourism, but it is very clean and safe here.  They have nice housing and there wasn’t a bit of security visible.  This is a strictly controlled religious state.

We were dropped off near the water taxi stand – just across the river from the water village, which we visited on our last trip here.  More than 30,000 people live here in thousands of structures built on stilts in the Brunei River.  Known as Kampong Ayer, the village contains homes, restaurants, mosques, shops, schools and hospitals all connected by wooden boardwalks.  People have lived here for more than 1300 years. 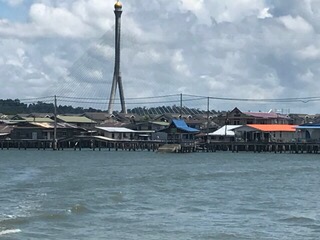 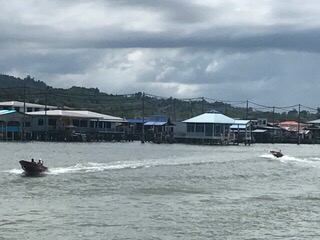 We got a walking tour map and set out to explore the sights.  Along the way, we met a very talkative man who wanted to know about us.  Graham and Shauna are originally from England and now live in Spain and it turned out that he had visited those places. Curiously, he really wanted to know the word for when pregnant women want specific foods, cravings, and he had us spell it and he wrote it down.  It became much too hot to stay and talk more, but it was an interesting exchange.

One of the main sights in the city is the Omar ‘Ali Saifuddien Mosque which was completed in 1958 and named after the 28th Sultan of Brunei.  It represents classic Islamic architecture.  It is surrounded by a lagoon and has a replica of a 16th century Royal Barge in the lagoon.  It is the country’s most recognizable landmark.  We could not enter as it is Friday but we did walk all around it. 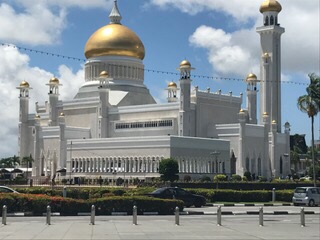 We saw the 1968 Coronation Arch, the Secretariat building, the Royal Regalia Building and the General Post Office which once was a Muslim cemetery.

The Timepiece Monument is a memorial clock monument build in 1959 to commemorate the visit of the King of Malaysia.  It is in the heart of the city and it functions as a “Zero-Mile-Clock” used to indicate the starting point of distances between Bandar Seri Begawan and other places in Brunei.

We also saw the site of the proclamation of Brunei’s independence from the United Kingdom on January 1, 1984.  This site is still used to celebrate national events. 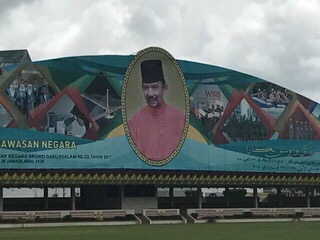 After a quick trip into a very modern shopping center to purchase a couple of things (thankfully air conditioned), we headed back to the ship.

Of course we did see some noteworthy signs! 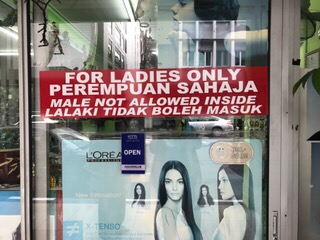 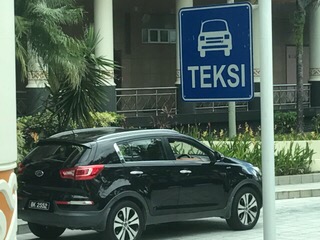 And we spotted this mosque on the way back. They are all pretty beautiful. 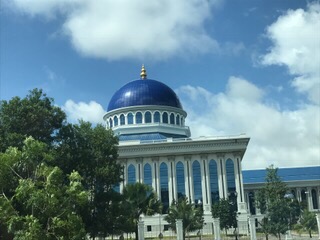 Tonight, the chef is preparing a traditional Malaysian buffet in the terrace restaurant and we are planning to go.
Last night, we had a show by two Malaysian harmonica players, Aiden and Evelyn, who are husband and wife.  We didn’t know what to expect, but they were fantastic!  She is apparently recognized as the best harmonica player in the world.  Our Insignia orchestra (who are all superb musicians) played with them on some songs and they even played along with a video of two of the group members that couldn’t make it to this engagement.  Can you even imagine someone playing “Flight of the Bumblebee” on harmonicas??  Fantastic.