We arrived in Budapest from Vienna on the Railjet – again the fast train.  It took just over 2 hours.

Our hotel is the Sofitel Chain Bridge and it overlooks the Chain Bridge, the Danube River and across to the Budapest Castle.  Our window overlooks it all and the view is just beautiful. The hotel was a great choice. There happened to be a Medtronic conference there and these robots were wandering all around the lobby. 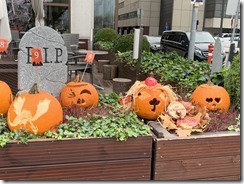 Rubbing the jolly fat policeman’s stomach is said to bring good luck, particularly in love! In his lifetime, the inspiration behind the statue was said to be a lover of food and women. He was immortalized during the 19th century, with a round belly to symbolize hearty Hungarian cuisine. 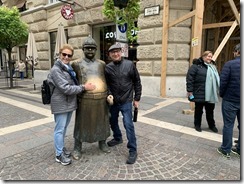 We toured the city on October 29 and 30 and then boarded the beautiful Emily Bronte riverboat where we stayed checked in and explored some more.

We stayed overnight there and had one additional day before sailing to Bratislava.  I will post the pictures all in this one posting.

We were glad that we had 3 previous days in Budapest because November 1 was a national holiday and a lot of places, including all shops except those run by families (very few) were open. Even the City Market was closed and it is something to see, we had 2 meals there. CNN rated it one of the best markets in the world. Hungary is known for paprika and goose liver pate and there are many shops that sell both. Here are some pictures of the City Market. 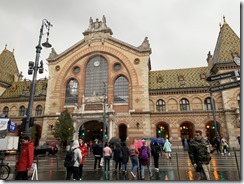 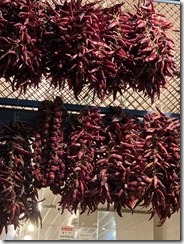 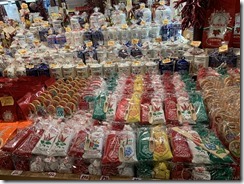 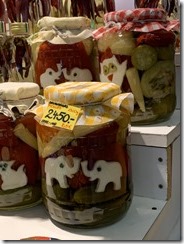 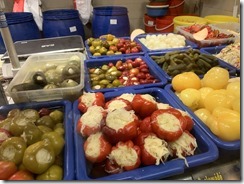 The tour with the cruise was an excellent one.

Hungary is now 1/3 the size it once was and has a population of 10 million of which 1.7 million live in Budapest. This capital is really 2 cities, Buda and Pest pronounced Pecht. 2/3 of the population lives on the Pest side and our hotel before we got on the river boat, was on that side overlooking the Buda Palace across the Danube River. The Buda side is richer.

Our guide spoke flawless English and said that she learned it in secret under the blankets of her bed in Communist times…. From Michael Jackson! English was not taught and was forbidden to learn in Communist times. It is said that Hungarian is the second hardest language in the world after Chinese.

The tour was by bus and ended at Buda Castle, which we had explored a couple of days ago. There is a funicular that takes you up, but we chose to walk. We walked around that area as it is huge and beautiful. The buildings are all museums now. We wanted to see the Hospital in the Rock, but it was closed so we only saw the outside. 2/3 of this city was bombed and destroyed so much has been rebuilt since WW II. 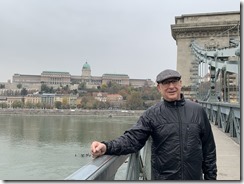 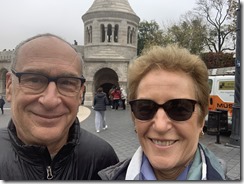 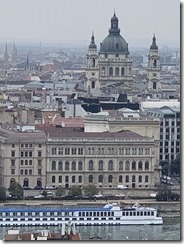 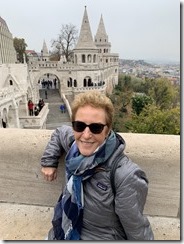 The synagogue here is the largest in Europe and the second largest in the world. It was designed by Catholic architects and because of that it has an organ which is not typically part of synagogues. Outside of the synagogue is a cemetery and a tree of life in silver commemorating the 600,000 Hungarian Jews that were killed during the Holocaust. There are 600 leaves each engraved with the name of a family member killed. We revisited the synagogue and had a guided tour on Wednesday. It can hold 6000 people, 3000 sitting and 3000 standing! And it is beautiful inside and out. It was rebuilt with generous donations from Tony Curtis and Estee Lauder both of whom were born here. 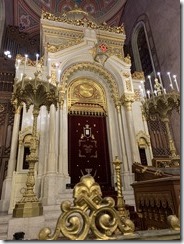 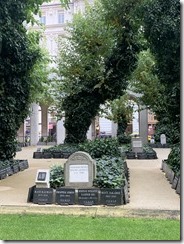 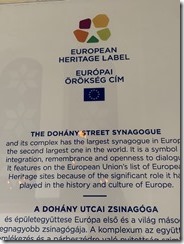 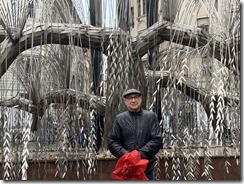 Hungary has the richest geothermal springs in the world and there are 24 spas here. They have to actually cool the water before it can be used in the pools!

Like in Vienna, coffee shop culture is big, dating back to the times when people lived in very small apartments with no heat or electricity and so they went to coffee shops for much of the day and evenings. Most buildings had a coffee shop in those days and it is still very popular.

As really had a chance to see so much of the city in our 4 days here. We enjoyed their food, wine and hospitality. We planned to do the hop on hop off bus on Wednesday but the concierge at our hotel advised against it because Putin was coming to Budapest and the traffic would be bad. So we walked everywhere that day. And we got stopped along the street for about 30 minutes because his motorcade was going to pass and the police would NOT let us cross. We have never seen so many police in a city before- they were everywhere.

They do love their goodies here.  The donut library.. what a great idea!! 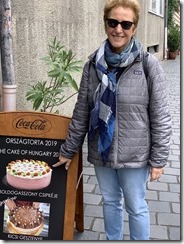 Here are more of the sights. 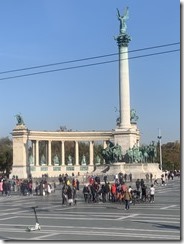 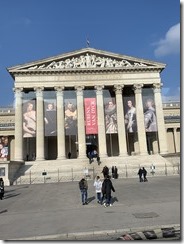 One of the not to be missed sights in Budapest is the heartrending display by the river. It is called Shoes by the Danube and is 60 pairs of bronze shoes modeled on footwear from the 1940’s. It is to commemorate those who were shot into the Danube by the Hungarian Nazis. 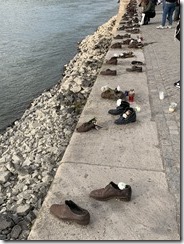 Just a few more shots before we left this beautiful city.

We did the hop on hop off on Thursday after taking our bags to the riverboat. It was fun and we did have an overview but our guide on Friday was much better.

I am writing this as we travel the Danube on our way to Bratislava, Slovakia. We just passed through a lock. There are 66 locks on our way to Cologne!