We arrived in Oslo this morning at 8 AM.  What a beautiful city!  In the morning we took the hop on hop off bus all around the city. There are beautiful forests, parks, museums and lakes that make the sights awesome no matter where you look.

Oslo is the oldest of the Scandanavian capitals and its history goes back 1000 years. About 600,000 people live here, and of the 454 square kilometers, 242 is forest. One of the first sights we saw as we left the port is the beautiful modern opera house made to look like an iceberg with the “iceberg” sculpture in the harbor that turns and twists with the wind. It has won many design awards. 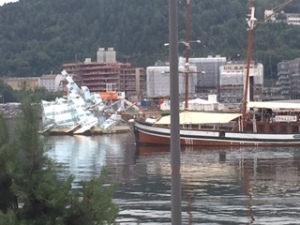 We heard that the wealth in Norway allows many people to own 3 homes and 2 boats, there are a LOT of boats in the harbor and a lot of Teslas in the towns.

We saw many of the historical buildings, including the Parliament. 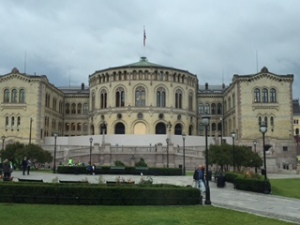 We also could spot the Holmenkollen Ski Jump which was opened in 2010 for competitive ski jumping. It is huge!  I couldn’t get a picture, though.

The Nobel Peace prize is given out here each year on December 10. The ceremony is in city hall, but there is a museum called the Nobel Peace Center.

We loved the beautiful statues and flowers. 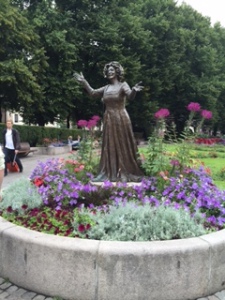 After lunch, we went on a hiking tour along the Akerselva River. We started by taking the Metro subway (which is modern and actually beautiful) to the  Nydalen neighborhood and then hiked back to central Oslo along the river.  There were originally industries along the river, but now they have been converted to shops, loft style apartments and offices.  The old buildings stand near new ones and the effect is really wonderful.  There are many waterfalls as well. We walked over 9 miles!  Luckily we don’t leave this port until 11 PM tonight, we had plenty of time to explore.

University students started here this week and were out in groups with upperclassmen showing the newbies the city.  Probably not much studying going on this week. 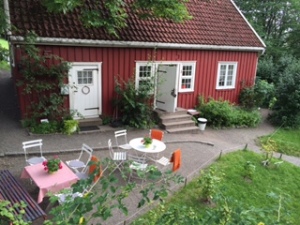 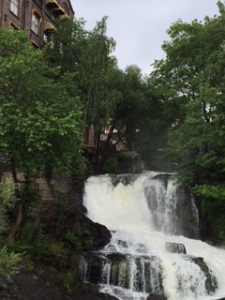 When we got back to the center of Oslo, we were tired but couldn’t resist a trip to the famous ice bar.  Here they give you ponchos and gloves and you enter the ice bar.  Everything, the glasses, the tables, the bar and the sculptures are made of ice.  You get a drink of cranberry liquor with white wine and get to sit on the benches, chairs or at a table or you can wander around and take photos.  Here are a few: 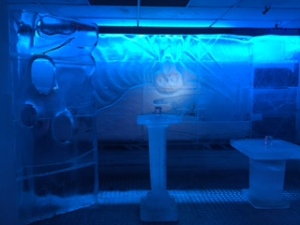 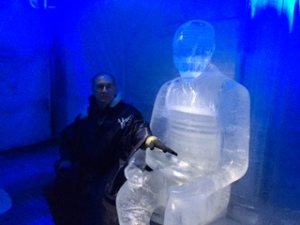 Tonight, we leave after our 3 days in Norway, and we have decided that it is a place we want to come back to.  We will have a restful day at sea tomorrow, then on to Hamburg Germany.

This entry was posted in August, Europe, Excursions, World Cruise 1. Bookmark the permalink.