The handover of Asia’s last two European colonies, Hong Kong in 1997 and Macau in 1999, opened new eras for both.  Despite a visible colonial heritage, the dominant Chinese character underlying these two SARs, or “Special Administrative Regions’ of China is obvious – Hong Kong’s population is 97% Chinese, the main language is Cantonese and there have always been close ties with their neighbors – even though there remains distrust on both sides.  Both places find themselves in the unique position of being capitalist enclaves subject to a communist state, under the relatively liberal “One Country, Two Systems” policy coined by the late Chinese leader Deng Xiaoping. We heard from our lecturer, John Freedman, that although they have elections, the candidates are chosen by China.  There have been massive protests about this (known as the “umbrella protests” but so far, no changes. We heard about the history of British rule, the Opium Wars and the Communist rule in China.

Hong Kong citizens have never had a say in their futures so they have concentrated their efforts on other things – primarily making money! You can find the greatest variety and concentration of shops and shopping on earth here.  We docked right next to the Harbor Center which is a huge mall featuring all of the brands we see in America plus much more.  There are entire sections just devoted to children’s clothing and accessories and the same with men’s wear, etc.  It is astounding (and expensive).

In Cantonese, Hong Kong means “Fragrant Harbor”.  It is composed of Hong Kong island and the Kowloon Peninsula, where our ship docked.  It was a very cloudy day with occasional sprinkles, but the sail in always impresses, no matter what the weather is like. 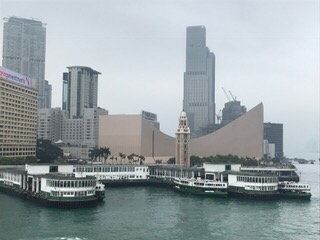 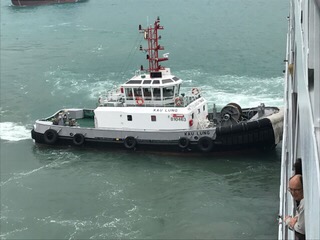 This tug is pushing the ship to help us turn in to our berth! 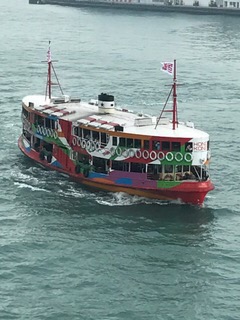 One of the many ferries that criss cross the harbor constantly

I have been to Hong Kong 4 times and Norm 3, so when we docked at noon today, I headed into the mall to have my nails done!  Hey, a girl’s got to do what a girl’s got to do!  They had blazing fast internet there so a double bonus was updating all my devices at the same time.  Norm sat in the salon and did his updating too.  By the way, it was the best nail job I have had done…ever!  Not as expensive as on the ship either – I am not happy with the new person in the spa so will be looking for shoreside opportunities.
I got done just in time to change for the Around the World special event held at the Aberdeen Marina Club. This exclusive club is located on the southern edge of Hong Kong Island and is one of the city’s premier destinations for fine dining.  It costs $500,000 to join and $300/month not including your dining and a yacht spot.  It was truly beautiful – there was a deck overlooking the tropical pool and marina and the ballroom had stunning chandeliers.

We had cocktails on the deck and in the area outside of the ballroom and were entertained throughout the cocktail hour and most of dinner by Asian musicians. 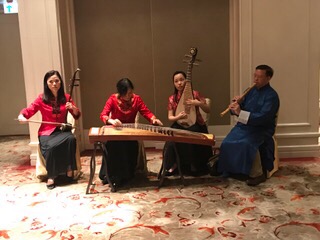 During our dessert, we were entertained by local entertainment that featured Kung fu, acrobatics and the ancient art of face changing, bian lian (which always amazes me!)

Lots of fun with friends and crew from the ship, including our captain – in street clothes!

Our around the world concierge, Ricardo 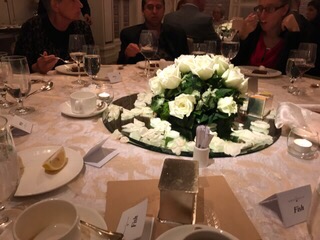 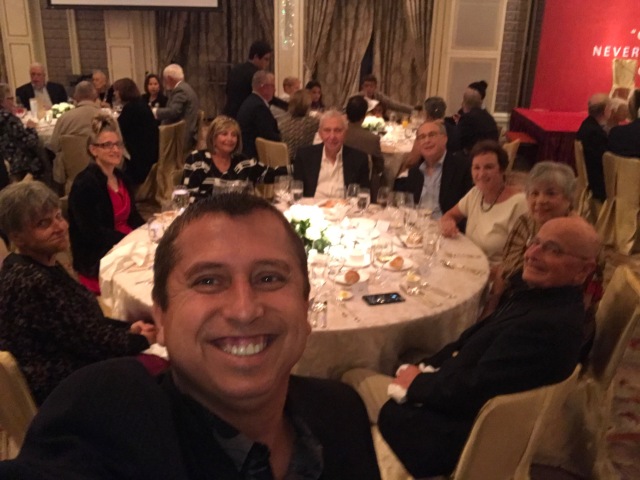