What a fabulous 3 days we had in Rio.  It is actually hard to decide which photos to post – the city is absolutely beautiful.

Well, to get started, on Easter Sunday we were told that the pilot boat would meet the ship at about 6 AM for the spectacular view as we sail into the port.  We were up but the ship was already almost in and we missed the sail in.  We found out later that there was a medical emergency on board so we came in very fast.  We did see the ambulance at the dock and someone with an IV being wheeled out – we don’t know who it was. But at least we saw the sunrise – and it wasn’t us on the stretcher. 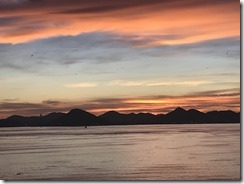 Anyway, after breakfast we left for a full day tour of Rio. We were worried that it would be very crowded on the holiday. We started with our guide, Cecelia.  She told us that it is largely a family holiday so actually the sights we would see would be less crowded today. She also told us that the city has 17 million people.  Our first stop was to Sugarloaf Mountain – one of the two most popular landmarks here.  We rode one cable car for the ride to Urca Hill with its beautiful gardens and view of the city.

The picture above is two of the older kinds of cable cars they used to use. The cable car system was opened in 1912 and was the third of its kind in the world.

We took another cable car to the top of Sugarloaf Mountain which is 1300 feet above sea level. Amazing. 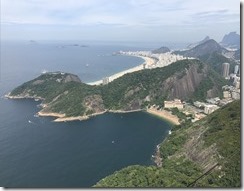 After a wonderful visit, we went to a Brazilian Churrascaria for lunch and it was even better than the previous one. 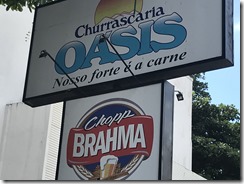 We then took a drive to Tijuca Forest which is a 47 square mile sanctuary away from the city.  It was cut down in the 19th century to make way for coffee plantations but was reforested beginning in the late 1800’s.  This included the planting of more than 100,000 trees.  We took a cog train up the mountain – Corcovado – which means Hunchback Mountain. The railway opened in 1884 and passes through 2.5 miles of the Tijuca National Park.  Our destination was the amazing Christ the Redeemer statue which overlooks Rio.  It was constructed on the mountain and completed in 1931.  It is 120 feet high and weighs 700 tons. It is the largest art deco statue in the world and one of the 7 modern wonders of the world.  Only the head and hands were made separately and attached after the statue was complete. When you get off of the train there is an elevator and an escalator that takes you to the statue. Again, the views are wonderful. 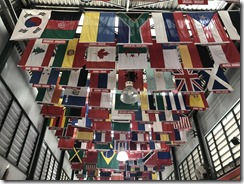 These are the flags of all the countries in the train station. 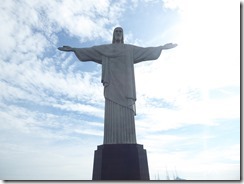 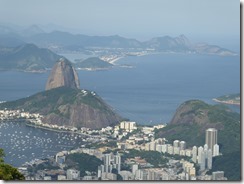 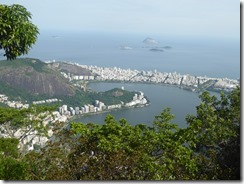 There were many orchids growing naturally on the trees. 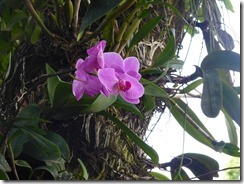 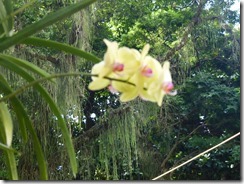 On the way back to the pier we passed by both Copacabana and Ipanema beaches.  Ipanema has bigger waves but is a much smaller beach.  And we learned from Cecilia that the “girl from Ipanema” is now 75 and lives in Sao Paolo! 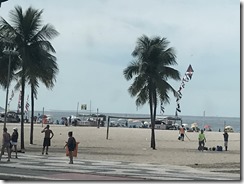 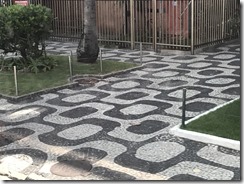 Tired but happy, we returned to the ship for dinner and then I saw the movie – The Greatest Showman while Norm went to sleep early! Our butler, Rehman, always brings us snacks and keeps our refrigerator full!

Today we didn’t have a tour booked.  Gabe Hazan, a man we met on board, has a lovely beautiful jewelry store in Rio and when I told him I wanted to get my nails done in the city, he arranged for his driver to pick us up at the port and take us to the shop where his wife, Vanessa had made an appointment for me.  There was a big line of people getting off the ship as it was changeover day and only 84 of the passengers are going to Miami so the rest were getting off to return home. We will have 600 new passengers embarking, so it is a good day to stay off the ship!  We did get off in time for him to take us to the shop for my 10:30 appointment where we waited for a while and then were told that the manicurist called in sick!  So the driver came around for us again and took us to Hazan where we had drinks and snacks.  Vanessa made a 2:00 appointment for me at another shop and we decided to go to see the Copacabana Plaza hotel which is right next to Gabe’s shop.  We had a lovely lunch by the pool. We had fast wifi and backed up our devices while we ate.

We also walked along Copacabana beach. During the nail appointment, Norm had fast wifi there too.  He also visited a pharmacy for drops for his blocked ear! And google translate works very well!

We decided not to bother Gabe’s driver but took a cab back to the ship where we had dinner in the wonderful Red Ginger restaurant.

There, they have a choice of what chopsticks you want, a tea menu and after the complimentary edamame they pour a bit of hot water on a small quarter sized thing that expands to be a small towel for your hands! Here are some of our chosen dishes. The beef teriaki was some of the best I have ever had. 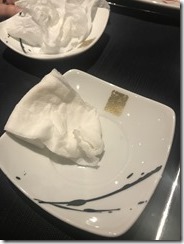 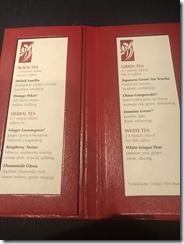 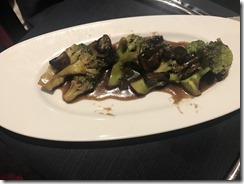 Our show tonight was a local music and dance troupe – Brasileirissimo. They put on a great performance which incorporated Samba, Gafieira and Capoeira plus a look at the world famous Carnival. It was amazing!!  I do think all the women had breast implants, though.  Not a jiggle among them and Nolan, our cruise director, said we would probably not see that much flesh in a long time.  The pics aren’t great, wish I had video, but believe me, it was a great performance. They even got the crowd involved. 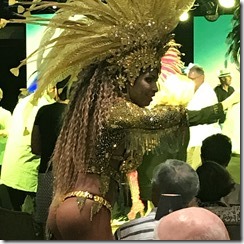 Our tour today was an open air jeep tour of the Botanical Gardens and the Tijuca National Park. Our guide was Marcello and he was really great. There were 7 of us in his vehicle. 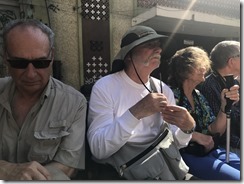 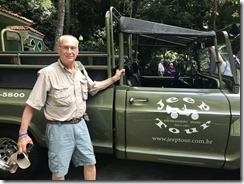 We went up to the National Park first.  As I mentioned earlier, it is 8200 acres and has 9000 species of plants.  We stopped at several highlights, including the Taunay waterfall and also the Chinese lookout where we again have wonderful views of the Corcovado, Sugarloaf mountain, Ipanema and Leblon beaches and the Rodrigo de Freitas Lagoon. 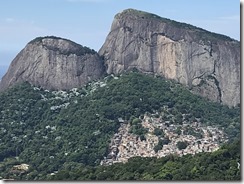 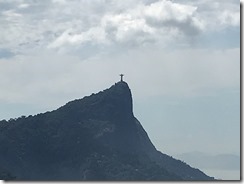 We headed down the mountain to the Botanical Gardens which was inaugurated in 1808 by King Dom Joao. We had a leisurely walk through the gardens, the orchid house and among the 90 foot royal palms.  This garden is half natural jungle and half gardens.  We saw many varieties of plants and trees. We also learned about the butterflies that need salt and there is not much in the forests to they will land on us for the sweat. 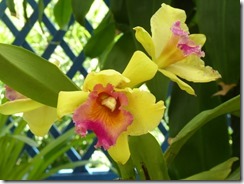 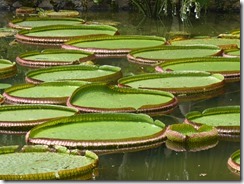 This is a unique sundial with open numbers that allow the sun to project the time on the stand below.

We learned a lot about Brazil and Rio over the 3 days we spent here.  It was the capital until Brazilia was built especially to be the capital, and many people still think this should be the capital.  Real estate here is varied, the closer to the beaches, the properties (mostly high rises) can be 10 times as costly as elsewhere in the city. Anything public is free, including university educations.  Marcello said that it is a paradox because the public universities are better than the private ones but to get in, you may need a private school education because at the primary and secondary levels the private schools are better than the public ones.

The favelas are the kind of slums here – they were where many of the African people settled once slavery was abolished here.  They are crime ridden in many areas, lots of gang wars, and we saw many armed police in some areas although we did not go directly into the favelas.  We were told that the  preferred word today is “community” not favela.  Many of the people there don’t pay anything for their residences if they were some of the first settlers, and they have great beach views! Samba originated with the African people and there are many samba schools here. Lots of graffiti here too, some good and some just a mess. Marcello said it is mostly teenagers with nothing to do. 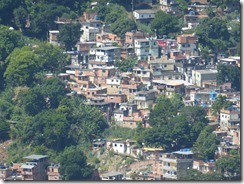 Here are some other sights of Rio. We saw some of the Olympic venues and many others are outside the city.

This last one is how they air condition the terminal! 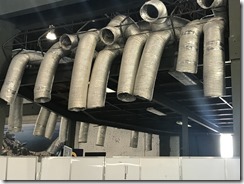 Next, we have 3 days at sea before going to Fortalezza.  Originally we were scheduled for Recife but a couple of weeks before sailing we heard from our travel agent, Pam, that they had substituted Fortalezza.  Many passengers hadn’t heard about the change!  We don’t know why but heard that it might have been because of the yellow fever here in parts of Brazil.  We did have the immunization before our first world cruise, so no worries from us!

Relaxation and massages are in order and probably a blackjack tournament or two!

This entry was posted in April, Excursions, South America. Bookmark the permalink.