Technically, this port is in San Pedro.  I spent some time with Mary, a worker here, who has lived here for all her life – 69 years.  And she says she can tell who is from here because they pronounce the place correctly. San Pee dro vs San Paa dro.  This is because it was settled by the Portuguese not the Spanish.

Since we came here from Mexico, the customs authorities require what is called a zero count – that means everyone must get off the ship and go through customs, even if they are not planning to go anywhere off the ship.  This applies to crew too.  So you can imagine the lines at customs just for the passengers who get to do it first.  And not all of the booths were open either.  Took over an hour.

Marilyn and I had nail appointments at 10 and we actually just made it – took a cab from the port.  After that we bought wine, and returned to the ship for lunch.  Norm went on the shuttle to Long Beach where he took some pictures and did some errands. These are of the lighthouse with the Queen Mary in the background, the post office and the Breakers hotel.

After lunch, I went back into the terminal for fast wi-fi to back up my devices and download the update for iPhone and iPad.  It was like watching paint dry.  The wi-fi is faster than the ship but still pretty slow. Took a couple of hours.

Here are some of the shots from the ship – of the port and of the massive amount of supplies they were loading.  There was also a diver inspecting the bottom of the ship! 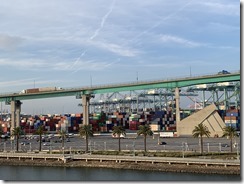 This is a huge container port, hard to describe the number of ships and containers here.

Well, it was the end of our time with friends Pam and Tom.  We had a great time with them on board, hope you don’t freeze back in PA!  Miss you already.

Greeting Graham and Shuna – the artist who painted our lovely Portofino painting in 2017 – and is the resident artist for the next 3 months – as well many others arriving here in Los Angeles, the last boarding point for the Around the World guests.  There will be a reception for all of us tomorrow night.

And the good news – the package Adam sent arrived, and my Amazon order did too!  Yay for US ports.  Now I have a device  to use so that I can move my pictures from the iPhone to my computer and compose my blogs in a much easier way!

We have 5 days at sea until we get to Hawaii.  Lots of things going on here, including a big Super Bowl party on Sunday. On the ship we will see it at 2:30.

This entry was posted in January, North America, World Cruise 3. Bookmark the permalink.