Posted on February 4, 2019 by patmathews

Last night was a performance of Gatsby by the entertainment team – we also saw it on the first leg, but most of this team is leaving us in Sydney, so it is their last performance of this show. Really well done. Here is the cast with fellow passengers Jim Beach and Bob Brown.

We have been on ships during the Super Bowl before, so we knew not to expect the commercials, but others were disappointed since that is the only reason they watch the game. Outside the US, they usually show the same ESPN commercials.

We entered the beautifully decorated Insignia Lounge on the Patriots side. One side was decorated for the Rams, the other for the Patriots. And both the food and drinks were plentiful. They had wings, hamburgers, hot dogs, chili, baked potatoes with fixings, guacamole and chips, pizza, popcorn, potato chips, pretzels, veggies and dip, cheese platters, etc.

Norm in his Eagles regalia. Maybe next year? 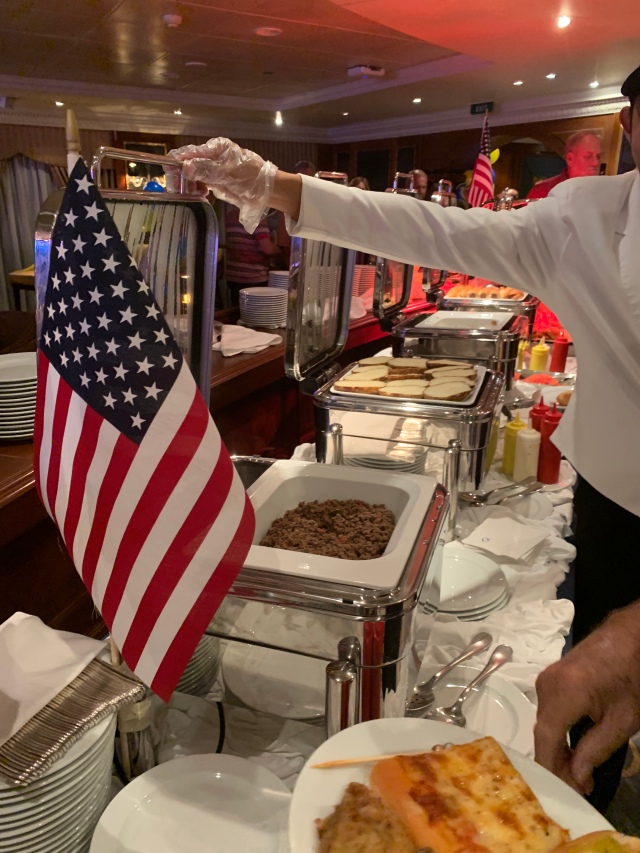 On the dessert side, there was a fabulous cake and chocolate Super Bowl trophy in chocolate with LIII along side. There were brownies and all kinds of assorted cupcakes too. 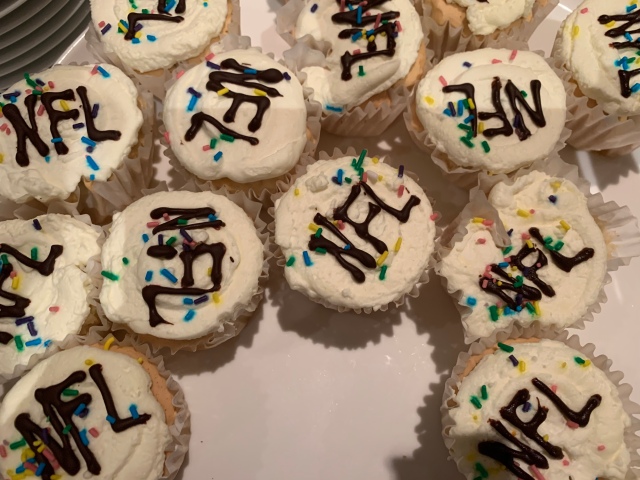 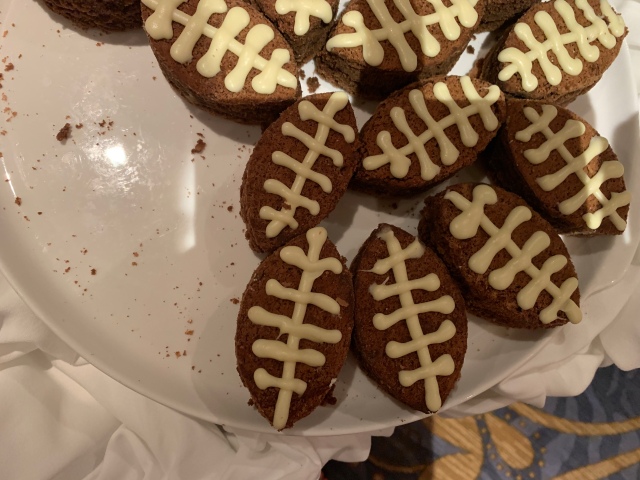 The waiters had their t-shirts and sunglasses on and were having a great time.

In the matter of the football pool….. friends Isaac, Lalo and Dariella are on this cruise (part of the “usual suspects” gambling buddies from a previous trip) – and Dariella and Lalo got off in Los Angeles and will rejoin in Honolulu thus avoiding the 5 day Pacific crossing. As Isaac was purchasing his squares on the board for the Super Bowl Pool, he told me to choose the 5 for Dariella so she would blame me when she lost.

Congratulations, Dariella. See you for hugs and high fives when we reach Honolulu.

I am posting this on Monday, 2/4. We are about 200 nautical miles from Kauai and the seas are pretty calm, it is sunny and beautiful. The captain announced that we have a medical emergency on board and the Coast Guard will be landing a helicopter on the ship around 3 PM for an evacuation. I don’t know which passenger, but wishing for good outcomes.

Tomorrow – hopefully we will get into Kauai. I found out we are docked, not tendering in so that should be good. Can’t wait to experience it as we keep hearing how beautiful it is.

This entry was posted in At Sea, February, Food, World Cruise 3. Bookmark the permalink.

1 Response to Super Bowl Sunday on the high seas