We had a beautiful sailaway from the Hong Kong harbor and then a nice day at sea. 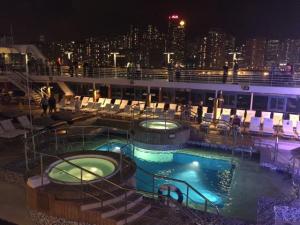 and here’s Norm with our entertainer for the evening, pianist, Van-Anh Nguyen. 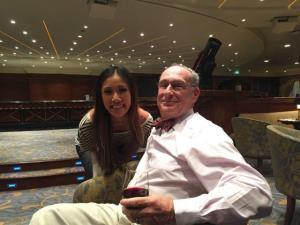 They are serious about avoiding illness here in the Philippines. We had to have a face to face with a thermal camera to take our temperatures and we had to fill out a medical questionnaire before being allowed off the ship. Here’s a trivia question for you: What is the only nation that changes its flag depending on whether it is peace or war time? It is the Philippines.  During peace, the blue is on the top, when at war, the red is on top. We were greeted with music and dancing on the pier. 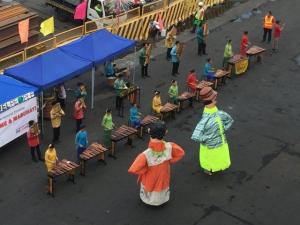 We enjoyed a half day tour of Old Manila (Intramuros) along with a whole bunch of school kids out for field trips.  They enjoyed watching us as much as we liked seeing them. Stella was our guide.  This country is 85% Catholic.  Computer hardware (mostly chips) is the main export and mangoes are the number 1 fruit export. Interestingly, there are 3 million of their people working abroad, and this is the third most important source of income for the country as people send their earnings home. Education is very important and these dollars help educate the children. We visited St. Augustine Church, and it was different to see St. Augustine in the center of the altar instead of Christ on the cross.  Stella says that the churches here feature their patron saints this way.

The only place you will find these is Manila (well, except the one they gave to Barack Obama!)  It’s a Bambike!  Made of bamboo of course. 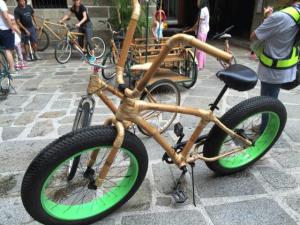 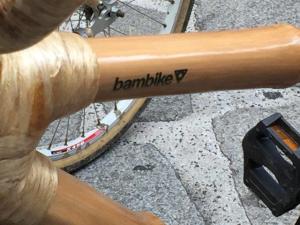 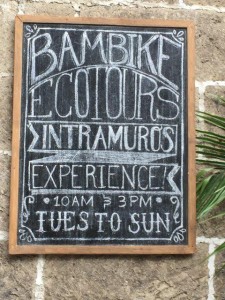 We visited Rizal Park where we saw the monument dedicated to the country’s national hero, Jose Rizal. Stella shared his many talents (artist, politician, architect, etc) and said his one flaw was that he was a ladies man.  It is rumored that he may have actually been Jack the Ripper because all of the murders occurred when he was in London and ended when he left each time. He was exeuted for treason and the monument shows him being shot by his own people, backed up by the Spanish soldiers with guns at their sides ready to shoot the Philippine soldiers if they failed to shoot Rizal. 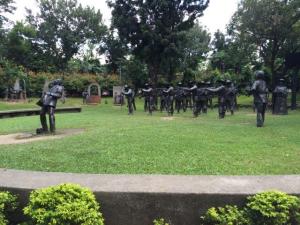 A pigeon hotel in the park

Fort Santiago was where Rizal was held and we visited the fort.  The entire district is surrounded by a thick wall that the Spanish built for defense in the 1500s. Throughout the early history prisoners were held and tortured here. After lunch, we were on a quest to find fast internet so I could do some important updates to my Microsoft account.  We took the shuttle to the mall but no luck.  We ended up at McDonalds… Success!

This armed soldier was patrolling outside the mall. 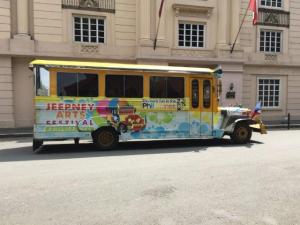 This is a jeepney. They are privately owned and quite popular here. They can hold up to 30 people, packed in!

Loved this little boy taking a picture of his parents!

Last, we saw the lovely Manila Hotel and spent some time listening to the pianist in the lobby. 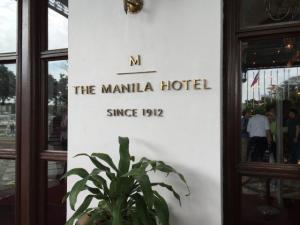 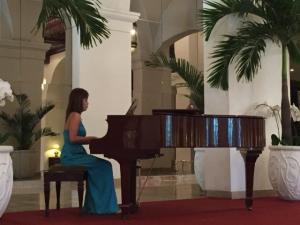 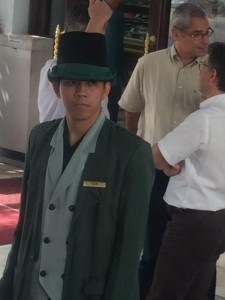 Before sailaway, we were entertained by these two bands, and they were great!  They played for almost 2 hours and ended with both bands together marching around the pier to Auld Lang Syne as the ship left the port.

This entry was posted in Asia, Excursions, October, World Cruise 1. Bookmark the permalink.