What a great way to celebrate a birthday! We have been through the Canal before but it was many years ago.  I remember thinking what an engineering marvel it  was then and my feelings have not changed.

First a little Canal humor…breakfast today has to be bagels and locks…well, it is very little humor, but still.

We entered the canal from  Colon on the Atlantic side and will edit at Panama City on The Pacific side. The canal stretches 50 miles and provides passage for over 12,000 vessels a year.  It cost our ship $150,000 for the transit. It was opened on August 15, 1914.

Going into the Gatun lock. We will be in the left side. You can see a large Holland America ship on the right, already in the locks.

There are 3 sets of locks that raise the ships up to Gatun Lake, an artificial lake created to reduce the amount of excavation work required for the canal, 85 feet above sea level.  We had Ed, a specialist on the canal, narrating throughout the day.  We entered the first lock at 8 am and will exit the third as I write this, about 3:30 PM. 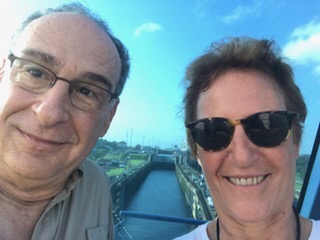 Here you can see the small vehicles, called “mules” that guide the ship in the locks. They used to use real mules. You can also see the lock gates straight ahead.

We did get to see the new wide canal that was recently completed.  This allows the large vessels to pass through the canal.  We saw this large container ship – the biggest used to hold 7000 containers, this one holds 13,000 and can now transit the canal in the large lane.

Here is the shadow of our ship as we pass through the first lock.

At the Culebra cut the canal passes through the Continental Divide.  This is the narrowest part of the canal and was excavated through rock and limestone.  Even today, it is hard to keep the sides from falling into the water. With the material excavated here, up to 63 Egyptian pyramids could be erected!

We passed the prison that holds General Noriega. Most of the shores are covered with jungle like vegetation and at parts you can see the terracing that was done to try to prevent erosion.

It was a really fun day with a lot to see and learn.

Tonight we will celebrate my birthday in the Italian restaurant – Toscana – with champagne of course!

Tomorrow we will be in Golfito, Costa Rica.

This entry was posted in Central America, January. Bookmark the permalink.