We have been to Acapulco several times so we opted not to do an excursion here.  I had an online exam to take in the morning and was quite concerned that the internet would not hold up during the at least 2 hours that it would take.  With 2 minor glitches, it worked and I could cross that off my list! 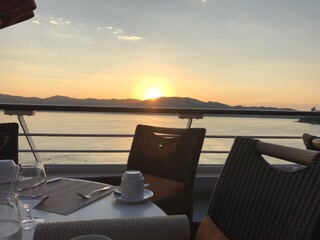 At breakfast, pulling into the harbor!

City view as we arrived

After that, we ventured out for a walk to the Zocalo square and markets.  Markets are one of my favorite places to visit and this one was no exception.  Mostly local people were here buying everything from chickens (cooked and uncooked) to fruits and vegetables to all kinds of clothing and electronics.  The Nuestra Senora de la Soledad cathedral is on the north end of the square and has uniquely shaped blue onion shaped domes and Byzantine towers. It was originally constructed as a movie set but was later adapted into a church. 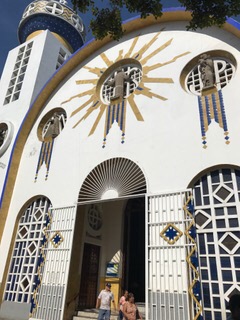 Acapulco is the largest city in the state of Guerreo and is a major port as well as a playground for Hollywood stars and millionaires.  As a side note, I first visited here in 1979 with a group of friends.  We did every activity you can imagine, from scuba to parasailing.  We truly burned the candle at both ends, so much so that I actually fell asleep in a disco called Baby’s!. Never quite lived that one down! Don’t know if that disco is still around today.

The most historic building here is the San Diego Fort, which we can see from our balcony on the ship.  It was built in 1616 to protect the town from pirate attacks. It now serves as the Acapulco Historical Museum. 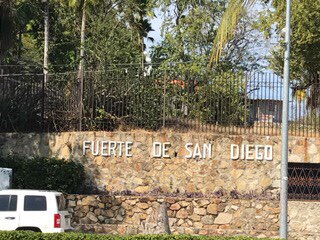 We saw a bit of everything as we walked around the city.  Two things I don’t have pictures of are the HUGE cockroaches (too fast) and the very young prostitutes (too sad to take a picture of).

Not the little mermaid but a wannabe! 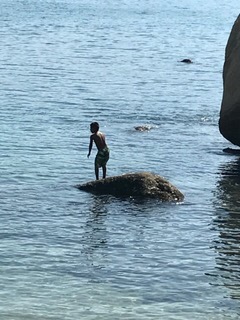 Many kids swimming, diving and snorkeling

One of the beaches near the port

Here’s one of their buses. I don’t think these are chicken buses, and we didn’t see any with live animals in them like Guatemala

Some of the most beautiful fruit we saw, and a very nice lady too! 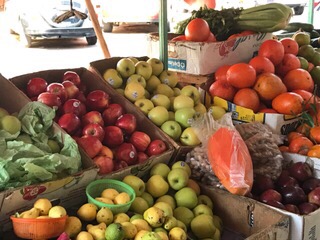 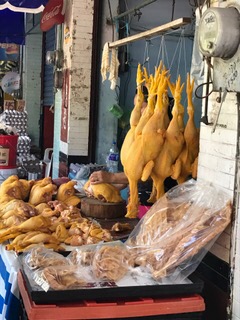 Tomorrow is another sea day and will be the first of the special world cruise dinners on board.  Tonight we will enjoy a Mexican buffet, and on Thursday we will be in Cabo San Lucas.

This entry was posted in January, North America, World Cruise 2. Bookmark the permalink.