Kota Kinabalu, KK for short, is a fairly new city.  It was almost completely destroyed during WW II and only a few colonial remains are still left.  It was a British territory for almost 100 years.  There is construction everywhere.  It is an incredibly diverse city – mostly Malay and Chinese, but there are 32 ethnic groups represented here and again, they all seem to get along.  You see many women in headscarves, no burkas that we saw and there is plenty of western clothing.

We were again greeted by the sounds and dancing of the Malay people.  You can see that we were docked in a very commercial port. 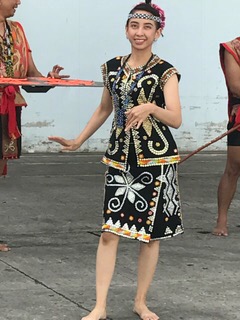 There are water villages here as well as a water market. This is a view of one of the villages that we could see as we arrived in the port.

Last time we were here, we saw a bit of the city and did an excursion to Kinabalu Park where we hiked most of the day and had lunch.  So this time, we chose to take the shuttle into the city (just a 15 minute ride).  We did some shopping, stopped for a coffee at Starbucks and walked around a bit.  We again tried to update devices but the Starbucks wifi was almost slower than on the ship which is really saying something.  So we gave up and came back for lunch and a relaxing afternoon.

We heard some people saying that they wondered why the ship stopped here at all.  We never feel that way, there is always something new to explore, new people to talk to and a new perspective to hear/see.

Remember when I said that in a Starbucks you could just as easily be in Philadelphia – except not as crowded.  Well, incredibly, this statue was out in front of one of the shopping center buildings!  For a moment, we thought we were back in Philadelphia!

OK, Jesse, I may never hear the end of it, but you did deal me a straight flush the other night in the casino.  You can keep that up, you know.  I promised to write about you in the blog… here is your shout out for today.

We have a sea day tomorrow and then we will arrive in Manila, Philippines.