As I wrote before, on our last visit to India, we missed Goa because we spent several days at the Taj Mahal.  This time, we did a half day tour called highlights of Goa.

We were met at the pier with people handing out red roses and serenading us. 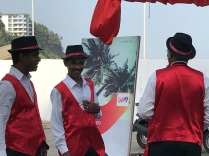 Our tour guide was Jenny and she was warm and informative.  Her English was perfect too. 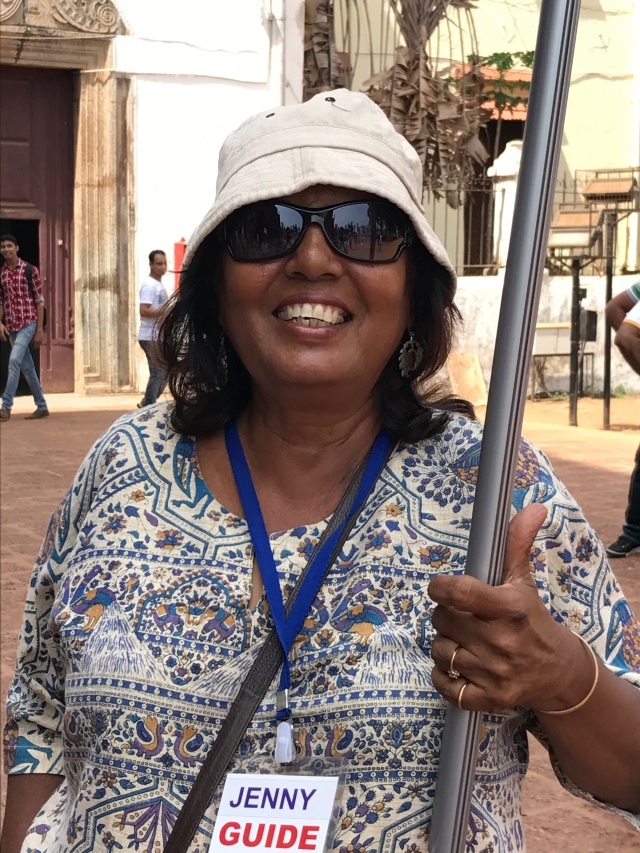 Goa is a lush and lovely port.  It has a history of British and Portuguese occupation until it was taken back from the Portuguese by India in 1961.  This didn’t end well for the Portuguese since they had to leave immediately or be militarily escorted out.  So most had to leave their ancestral homes and now many are just abandoned.  Those that are still occupied are often quite beautiful.  More about that later because we visited one.

It was shortly after the “Liberation” or “Occupation as some Goans still refer to it that the first hippie travelers came here.  Relieved to have found somewhere culturally undemanding to party, the “freaks” got stoned, watched the sunsets over the Arabian Sea and danced like lunatics on full moon nights.  Since then Goa has been trying to shake off it’s reputation as a druggy zone!

Goa is the state in India and the town we arrived in is Vasco de Gama named after the explorer.  While 66% of the population is Hindu, 28% is Catholic as compared to only 2% Catholic in the rest of India.  This is again due to the Portuguese missionaries who converted a lot of the people in this area.

People consider Goa to be the best state in India, and it has the highest GDP in India.  It is also the smallest state. There are 330 villages here in this area and it was the community system where the community owned the land. In 1962 Indira Ghandi took the land and gave it back to the farmers – social democracy.

Mangoes are everywhere and they have 160 different varieties.  Every family grows their own rice. Cashews are grown here in the season from February to April.  Monsoon season is June – September and they get 300 cm of rain during that time.  No one gets married or does a lot of work outdoors during this time.  They are building a new 6 lane highway and work will need to stop.

Iron ore is the biggest export but tourism brings in the most money. Many families have one member working outside India, often in the Arabic countries, and they send the money home.

Coconut trees are everywhere and they collect the “sap” in clay pots up in the tree.  They make an alcohol called todi and it is also used to make vinegar.  Coconut oil is widely used both in cooking and for skin and hair. There is a research facility with one of the projects to shorten the coconut tree since they don’t have people willing and able to climb them to harvest the coconuts any more.  (Maybe they need to import those monkeys from Thailand!)

We traveled about an hour to Old Goa.  We saw a compound of three different churches here, the most important legacy of the Portuguese.  There is not really much of a town here anymore.

We went first to the Se Cathedral, dedicated to St. Catherine.  It was consecrated in 1640 and took over 80 years to construct.  It is a UNESCO World Heritage Site and is larger than any church in Portugal.  The church had 2 towers but one collapsed in 1776 and was never rebuilt.  You can see that on the right side of the photo. The remaining tower houses the Golden Bell, renowned for its melodic tone. We did hear the tone, but could not go inside as a wedding was taking place there. We didn’t see the wedding but caught a couple of guests on their way.  And I guess that tree bends with the winds!

Across the gardens is the Basilica of Bom Jesus. This is built of black laterite stone with marble and inlaid precious stones and is the most famous church in Old Goa.  It contains the tomb of St. Francis Xavier who spread Christianity in the Portuguese colonies and is the patron saint of Goa. Jenny told us that in every family one son is named Francis Xavier! The building is the first church in India to be elevated to the status of a minor basilica and is also a UNESCO World Heritage Site.  It was consecrated in 1605 and is the best example of Baroque architecture in India. 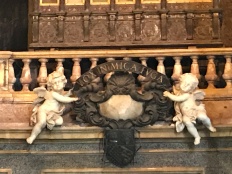 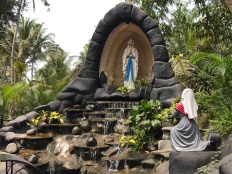 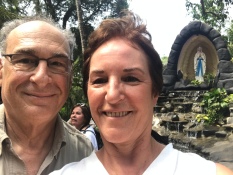 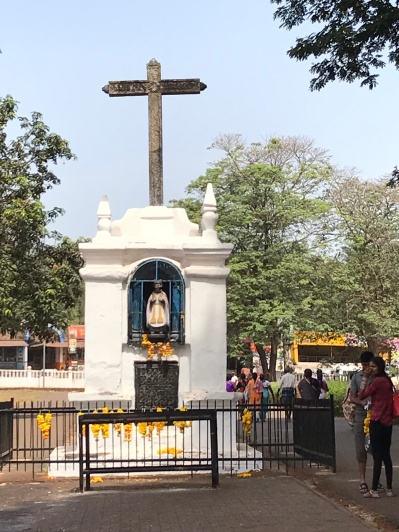 As we all gathered after visiting the basilica, many Indian people came up to us and asked to have their pictures taken with us.  Jenny said that Indian tourists come here partly to see westerners!

I captured a few photos of them, too but they were much less interested in that. 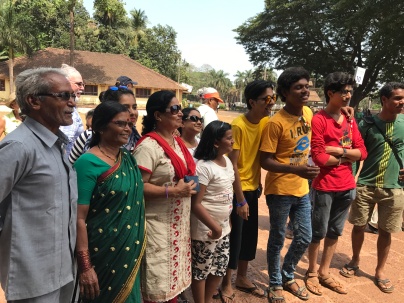 We went back to Merces where we visited the ancestral home of Otto de Oliveira Fernandez, a Goanese family.  The home was quite spectacular – an example of Goan-Portuguese architecture.  We met the family, had lovely refreshments (they have a bar in the courtyard and the Goan Kingfisher beer was one of the beverages served.  We were entertained by the many birds and the three family dogs -as well as two musicians who played and sang from the porch.  A delightful respite on a hot day! 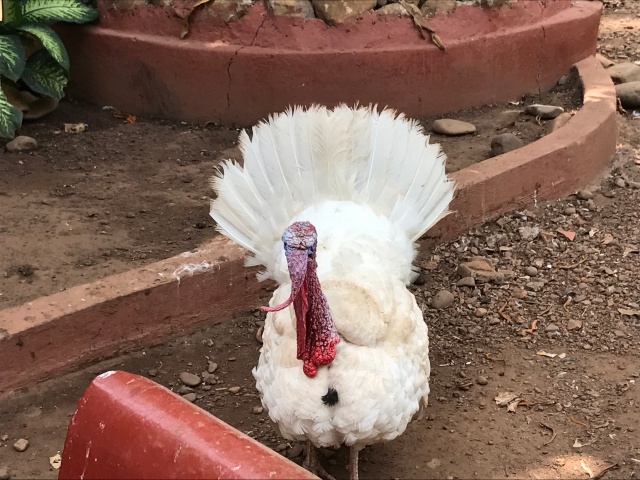 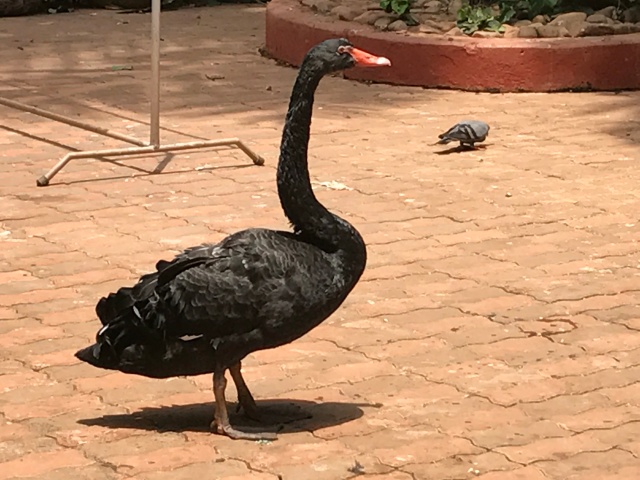 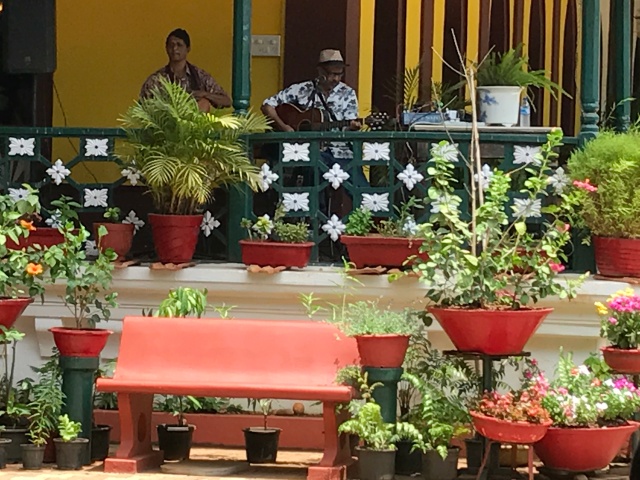 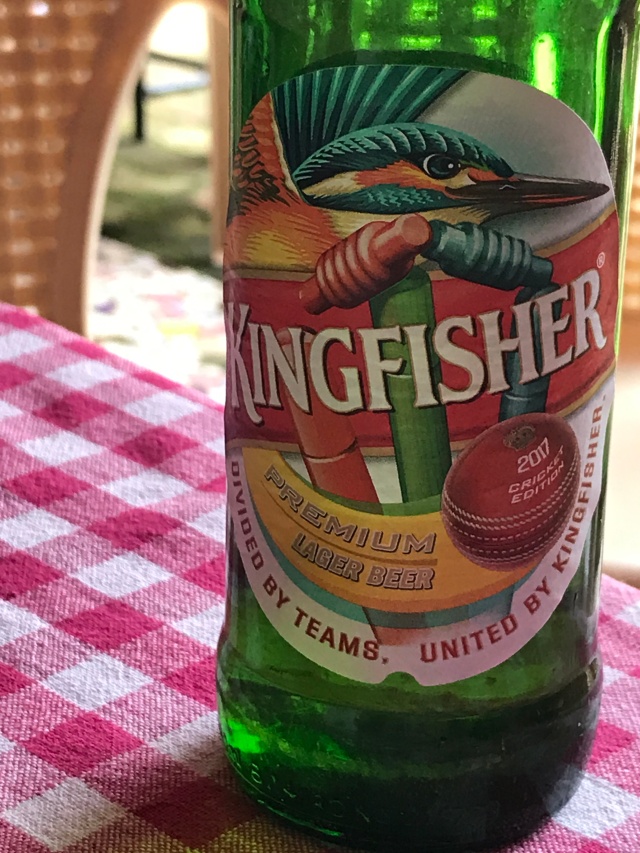 Our last stop of the day was at a market in the capital city of Panjim.  The city is spread on the south bank of the Mandovi River.  This city has a relaxed and friendly atmosphere and lots of bakeries and taverns.  The market was as amazing as any we have visited – and I love markets – the displays are just beautiful and the people pretty friendly but sometimes don’t like their pictures taken. 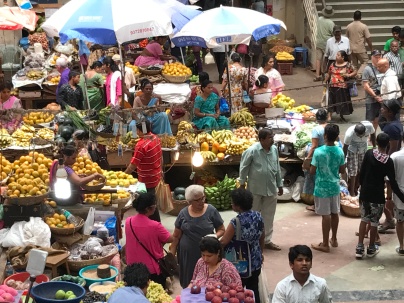 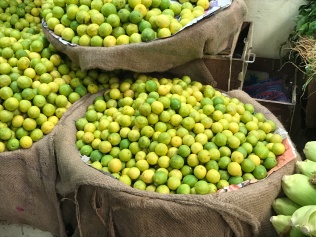 After a hot and interesting day, we relaxed in the cool comfort of the ship.  Next stop is Mumbai where we will spend 2 days.

This entry was posted in April, Asia, Excursions, World Cruise 2. Bookmark the permalink.