Mangalore was one of the most famous ports of south India. It was well known as a major source of pepper.  Today the main exports are coffee, cocoa beans and cashew nuts.

We had a tour today – highlights of Mangalore.  Ulchana was our guide, and she is a master’s degree prepared marketing executive for universities and hospitals. She lives in Bangalore now but is a native of Mangalore.  She started doing tours as a college student and returns to her hometown to do tours whenever she can.  She was a terrific guide.

In this photo, she is explaining part of the process in the cashew nut factory, our first stop. Aschal Industries employs 500 people, mostly women.  They have a child care facility on site. We got to see almost all stages of the processing of the highly prized cashew nut, starting with the drying.  They don’t allow visitors to the final sorting and packaging due to cleanliness concerns. Cashews are the only nut that grows exterior to its “apple”.  The apple is used to make liquor and the shell of the actual nut is pressed to extract oil which is used in furniture polish.  Mangalore is recognized as the birthplace of organized cashew nut processing although the nuts are grown mostly in neighboring Goa.

It is a hugely labor intensive process. We bought some cashews and Ulchana also gave us each a package when we got back on our bus.

We learned that there are 3 nuts that form the basis of what is eaten here, coconut, cashew nut and areca nut. The coconut tree has thousands of roots and they do help on riverbeds to prevent erosion.

Brown and red rice are also grown and there are typically 2 harvests a year. They export about 10,800 tons daily.

Mangalore has 500,000 population. There are 4 major universities and all have medical schools and are teaching hospitals.  Medical tourism is big as people come from all areas of the world and especially from southeast Asia for the quality medical care.

As in other areas of India, English is taught in schools and there is a 94 % literacy rate here. The local language is Tulu.

We visited the Gokarnath Temple.  It was built in 1912 and is dedicated to Lord Gokarnath and has recently been renovated.  It is considered to be an excellent example of the modern architecture created by the Billawa Community of Mangalore. 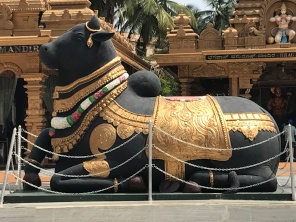 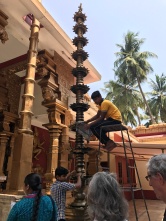 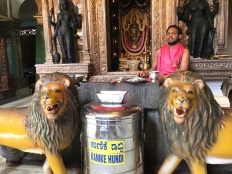 The red marks we have on our foreheads have nothing to do with the caste system but are blessings from the temple for good health and prosperity. In the temple you must go counterclockwise as you view the various statues, etc.

Speaking of the cultural norms – a law has recently been passed here that prohibits marriage before age 18 to stop the “child bride” trend.  Most educated young people don’t marry until 26 for girls and 28 – 34 for boys.  There are still mostly arranged marriages but now the young adults are free to say no or to have a love marriage.  There can be up to about 2000 guests at some of the weddings.  Young couples (the youngest son) brings the bride to live with the parents so it is common to have 3 generations living together.

Our next stop was the amazing St. Aloysius Chapel which is one of the most beautiful we have seen.  It was built in 1884 by the Italian Jesuit, Antonio Moscheni and  is often compared to the Sistine Chapel in Rome.  There is a remarkable series of intricate paintings that cover every square inch of the interior ceiling and walls. Brother Antonio Moscheni, who was also an Italian artist, painted it all in 2 1/2 years! The chapel is dedicated to Aloysius Gonzaga and one entire portion of the chapel tells the saint’s story through paintings. There is also a huge series of buildings, part of St. Aloysius College, which have a wonderful view of the sea. 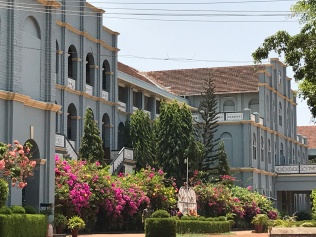 Unfortunately they do not allow you to take pictures inside but here is a link to a series of photos that show the amzaing fresco, tempera and oil murals that adorn the entire inside of the chapel. St. Aloysius Chapel

There are beautiful gardens as well.

Our last stop was at the Belmnt House, which was built in the early 18th century by Michael Thomas Harris, the son of Lord Harris.  After his tragic death at age 40, it passed through several owners before being purchased by the Peres family who still own it. Joan Peres, now a widow (in the picture with me) and her son Greg (pictured with Norm) live in the house where Joan and her husband raised five sons and a daughter. Most of the children have left Mangalore but Greg is involved in the real estate business and stayed behind. One son, Joel, is the General Legal Counsel for Coca Cola in the Asia Pacific Region.  Joan was very proud of her family and showed me pictures of her children and grandchildren.  The home was beautiful and they were so hospitable, serving cookies and lemonade which we really appreciated as the temperature and humidity were very high – 96 degrees! 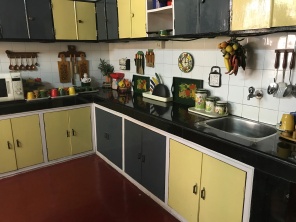 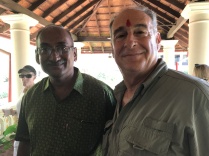 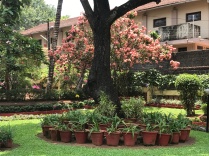 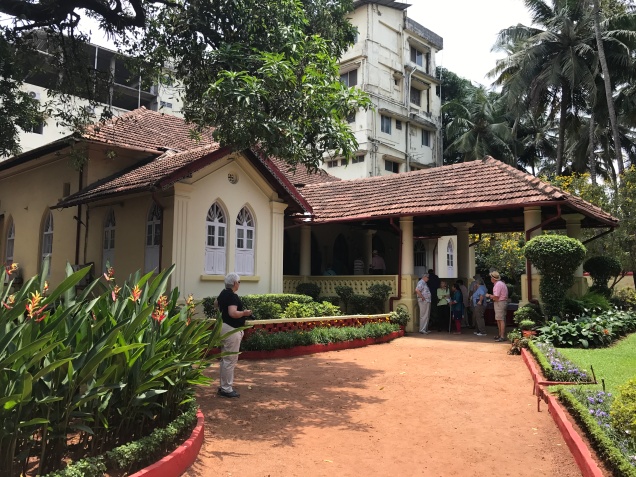 We enjoyed Mangalore and it is the home of our butler, Vishant.  He brought his family aboard but unfortunately only Norm saw them as I was getting my hair cut when they arrived.

Both Indian cities we have seen so far have a mixture of beautiful homes and apartments and also great poverty and trash. 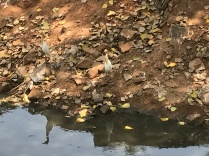 So, the chicken stall was almost right outside of the lovely Belmont home!  Lots of diversity here in India, but I do have to say, all religions seem to live in peace here.  We see burkas, saris, Western clothing and no one seems to have guns or objections to other religions.  Maybe we have something to learn.

On to Goa tomorrow.

This entry was posted in April, Asia, Excursions, World Cruise 2. Bookmark the permalink.