Today we entered the Suez Canal in the early morning, after waiting for our ship’s turn in line.  It is our second time through the canal so we weren’t surprised by what we saw. It is not like the Panama Canal which is really interesting with all of the locks. The Suez has no locks.

Evidence indicates that there was an east-west canal joining the Nile with the Red Sea by the 13th century.  It later fell into disrepair and re-excavation was undertaken in 600 BC but never completed.  At the end of the 18th century, Napoleon Bonaparte contemplated the construction of a canal to join the Mediterranean with the Red Sea but the project was abandoned when a French survey erroneously concluded that the waters of the Red Sea were higher than those of the Mediterranean, making a lockless canal impossible.

Between 1860 and 1862 the first part of the canal was completed and had a dramatic effect on world trade.  Disputes between the UK and Egypt led to the invasion by Britain, France and Israel in the weeklong 1956 Suez War.  The canal was closed until April 1957.

Since 1974 the Sinai Peninsula has been protected by a UN Peacekeeping force. Some 25,000 ships – about 14% of world shipping – pass through the canal each year.

In 2015 Egypt unveiled the expansion to the Suez Canal,  It was completed in a third of the time originally estimated and an additional 22 mile shipping lane was added along with widening of the current canal.  This increases traffic from 50 ships a day to 97 and reduces transit time from 18 to 11 hours.

Our destination lecturer, Peter, was on the deck doing commentary much of the day and helped us to understand what we were seeing.

Here are some pictures I took along the way.  I was up to see the sunrise.  The last picture is of the many condo complexes that are being built. Most of the land is high sand dunes but occasionally there are some developments. We were through the canal by 3:15. 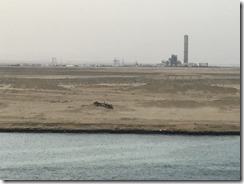 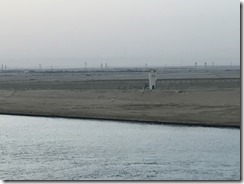 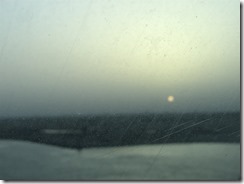 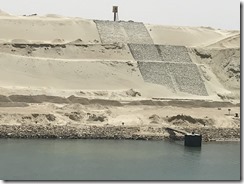 Tomorrow we will be in Israel for two days.  Looking forward to visiting with a colleague and her husband on day 1.

This entry was posted in Africa, At Sea, May, World Cruise 2. Bookmark the permalink.