Limassol is Cyprus’ second largest city.  The population is 200,000.  When we were here last time, we visited Nicosia, the only capital city in the world to remain divided by force.  The Green Line divides this city into the northern part occupied by Turkish Cypriots and the southern part by Greek Cypriots.

We chose to stay in Limassol this time and took the shuttle from the port to the town, just about 3 miles distance but they don’t let you walk.  The city center is compact and we enjoyed strolling and shopping in the old city and visiting the Castle of Limassol. Here are some views from the top of the Castle.  In the second one, you can see our ship in the background. 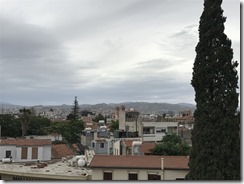 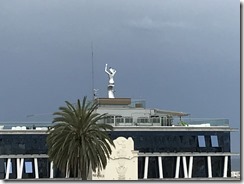 We were surprised to learn that it was World Museum Day so all the museums including the Castle were free today!

The Castle dates back to the 12th century and is the main historic site here.  It was originally built to guard and protect the port and the city. The destruction of the medieval phase of the castle happened during the Genoese raids in 1373 when the town was torched.  The walls are two meters thick! That didn’t prevent it from being destroyed by invaders and earthquakes. It was restored in the 19th century by the Venetians. Richard the Lionheart married Berengaria of Navarre at the original castle.  Now the castle houses the Medieval Museum – very interesting. The individual arched rooms were originally jail cells. 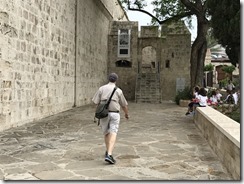 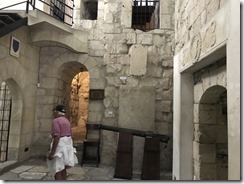 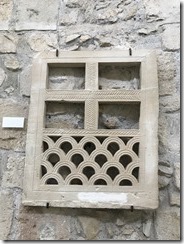 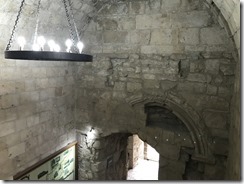 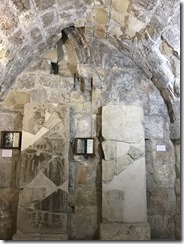 After the Castle, we wandered around the old city and the shops. 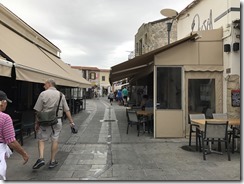 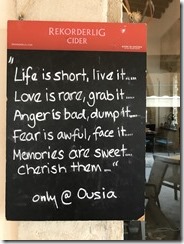 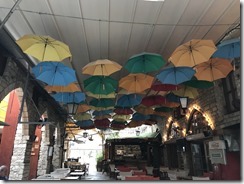 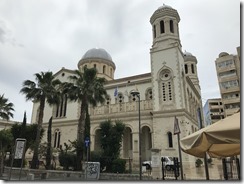 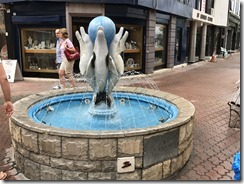 I stayed for lunch at a small cafe (last picture) Norm headed back to the ship with his purchase of wine.  Cyprus wines are highly rated supposedly.  We will see what Norm thinks!

And, I did buy a beautiful purse here. The leather goods are pretty spectacular. 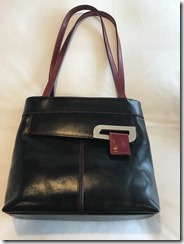 There is a lovely sea wall – here it is as we sail out of the harbor:

We had an announcement from the Captain that due to high winds, we were skipping the tender port of Kos Greece due to unsafe conditions for the tenders, so we will be going to Rhodes instead.  We were going to do a bike trip in Kos, so we will have to see what we will do in Rhodes.  Travel makes you very adaptable!

This entry was posted in Europe, May, World Cruise 2. Bookmark the permalink.