It’s said that Ireland’s second city is first in every important respect – at least according to the locals, who cheerfully refer to it as the “real capital of Ireland”.  It was badly hit by the recession but is now reinventing itself with stretches of waterfront and lots of bars and coffee bars.

The town center is walking distance from the ship so we set out to explore after breakfast.  Cobh was formerly named Queenstown from the visit of Queen Victoria who apparently wanted her name or title on every place she visited! The harbor here is the second largest harbor in the world, second only to Sydney harbor.  More than 100,000 passengers and crew come here every year.

There was one other ship here today and since it was Sunday we didn’t know what to expect to visit – what would be open. Since we saw the Titanic Trail and museum in Belfast, we wanted to do the “Titanic Experience” in Cobh.  First we were each issued a ticket with a passenger’s name on it.  I was Marcelle Daly, 30 years old, sailing alone in a 3rd class cabin (cost of the ticket  – $40 then, equivalent to $640 today) which was half of the yearly wage back then.  Norm was Roger Tobin, 22, traveling alone in a 3rd class cabin.  Most of the passengers who boarded here were 3rd class passengers. The Titanic sailed from Cobh as the last port of call before it hit the iceberg and sank. 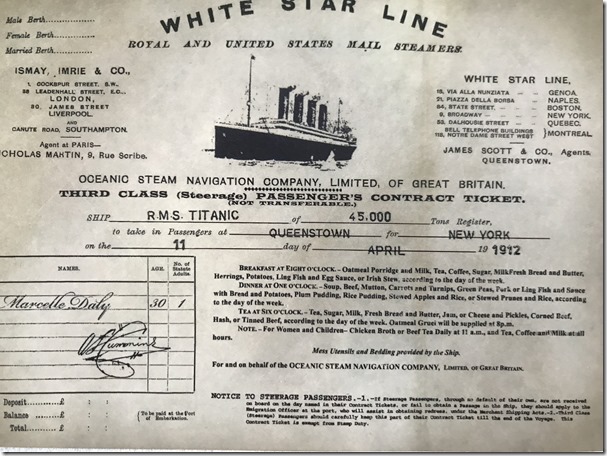 We went through the guided tour as these passengers and didn’t learn our fates until the end. This was the original building that passengers came to when they got on the ship and the remains of the dock are original as are the windows and other parts of the building.  Here are some of the photos (some were taken by Father Frank Browne who disembarked the ship here and didn’t do the crossing).  He was an avid photographer and the photos he took would have all been lost had he stayed on the ship.  Many of the photos in Belfast and here are thanks to his work. 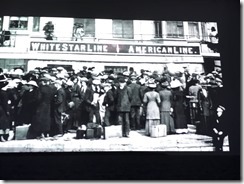 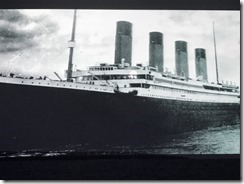 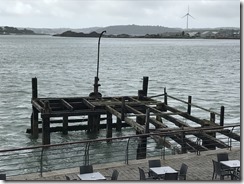 Very interesting perspective to add to what we saw in Belfast.  What we learned at the end: Roger was lost at sea and Marcelle survived.

Next door to the exhibition was a beautiful gift shop (Tregan) with lots of Irish sweaters, tweeds, jewelry and crystal.  Here’s my purchase:

We then walked up the lovely flower lined streets to see St. Colman’s Cathedral. It was started in 1868 and took over 50 years to complete. The spire is 300 feet tall. It is a French NeoGothic style and has amazing stained glass, marble carving and stonework.  It is one of the most beautiful we have seen (and well worth the walk up the VERY steep hill!) 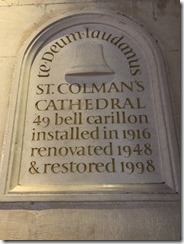 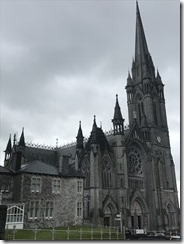 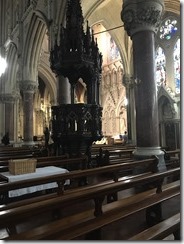 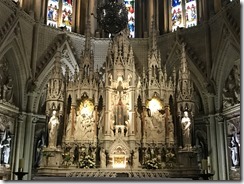 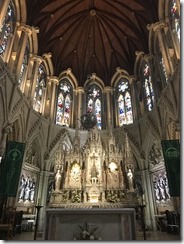 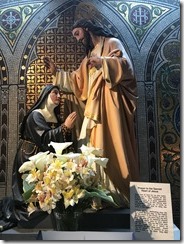 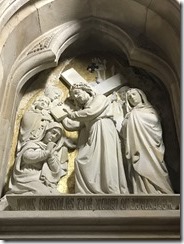 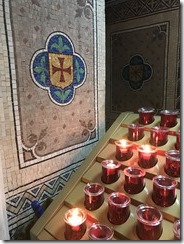 I lit a candle for my mom…try to do it in every church we visit.  We miss her so.

Here are some of the sights in the town. 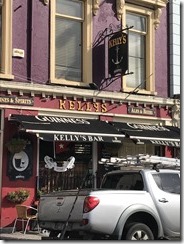 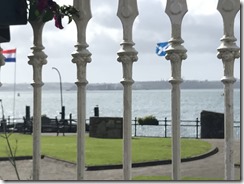 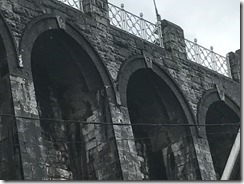 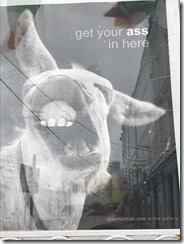 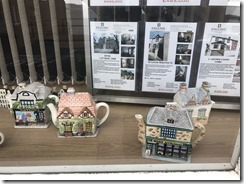 We fell in love with these prize winning dogs!  And believe it or not, the building shown below is Wan Fu, a Chinese restaurant! 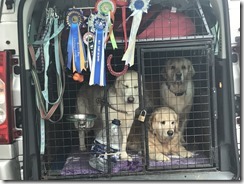 We chose to have lunch at Cuppacity – a pub/coffee shop around the main square. The Rob Roy was our first choice but they were not serving lunch. Had a great lunch – and this cup of coffee was bigger than it looks in the photo. 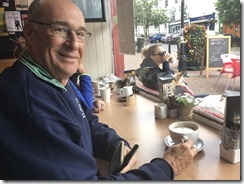 We walked some more after lunch and were surprised to find Kat, our fellow passenger and flutist, playing her instrument in this small pub and teaching a young girl! Even the dogs were mesmerized. 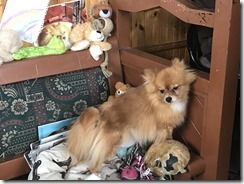 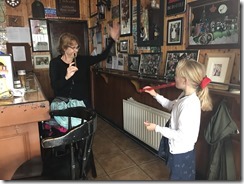 Our last stop was the Queenstown Heritage Center/Railway station.  I bought two beautiful knit jackets here at the Christy’s shop.  Here’s a shot of one of them:

Mark, you can come here directly from Boston, Adam – from Providence!

We have 4 sea days in a row now and it was pretty rocky last night both in the protected harbor and as we moved out to sea. We will see what the Atlantic crossing brings!

This entry was posted in Uncategorized. Bookmark the permalink.