Posted on February 6, 2019 by patmathews

Heading out of the Nawiliwili harbor last night.

Forgot to mention that the chief export of Kauai is…. wait for it… bottled water! And that the Wailua Falls are known as the shrimp falls. Kids used to go to the falls and catch shrimp for dinner. These days there are fewer of the shrimp going over the falls. Also last night the Terrace Cafe had a delicious Asian dinner in celebration of the New Year, the year of the pig. And yes, they had a whole roasted pig. Seems a bit harsh if you ask me. I didn’t have that, but I had wonderful noodles, etc. 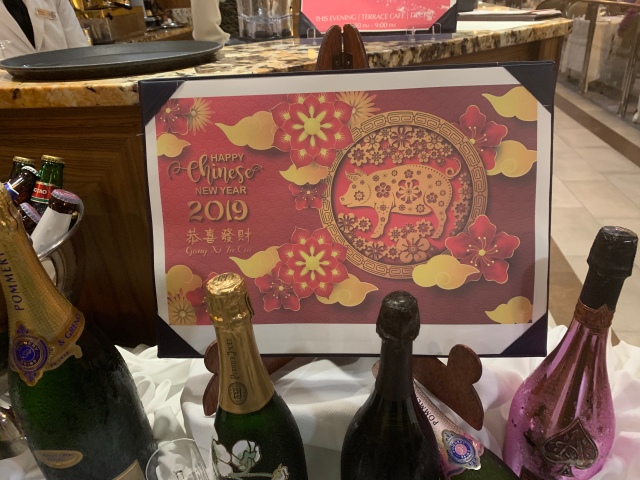 Today we arrived in Honolulu early – 7 AM. We have been here 3 times before and have seen most of the sights so we decided to venture out to try to get a whale watching trip. One of the security people told us where to find them and also that if we show our Medicare cards we could travel on the buses all day for $2! We planned to walk but it was a good tip. An even better tip was to definitely NOT jaywalk because if caught it would be a $130 fine. Each. So we followed the law all day.

We found a tour and it was going to go out at 10 AM. So we had about 45 minutes. We found a Starbucks and updated our devices with their fast Wi-fi.

Here’s our boat for the whale watching. 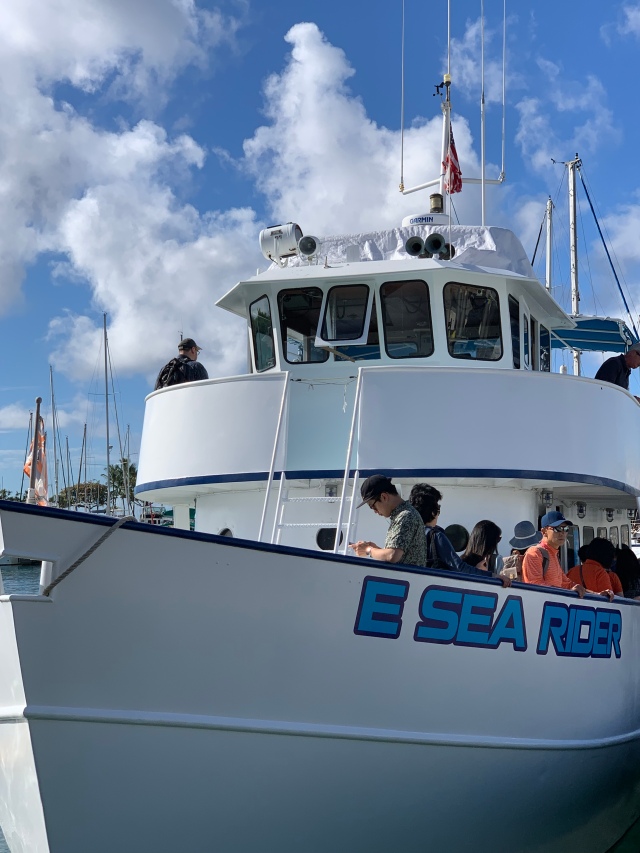 After just a short time out, we came upon a whole pod of dolphins. Some were doing tricks near our boat! 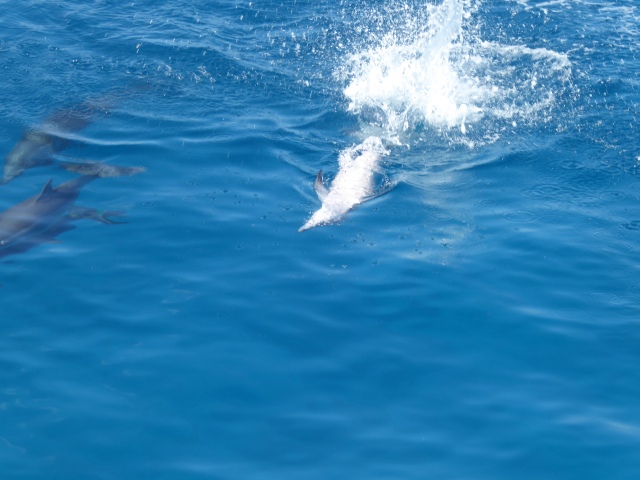 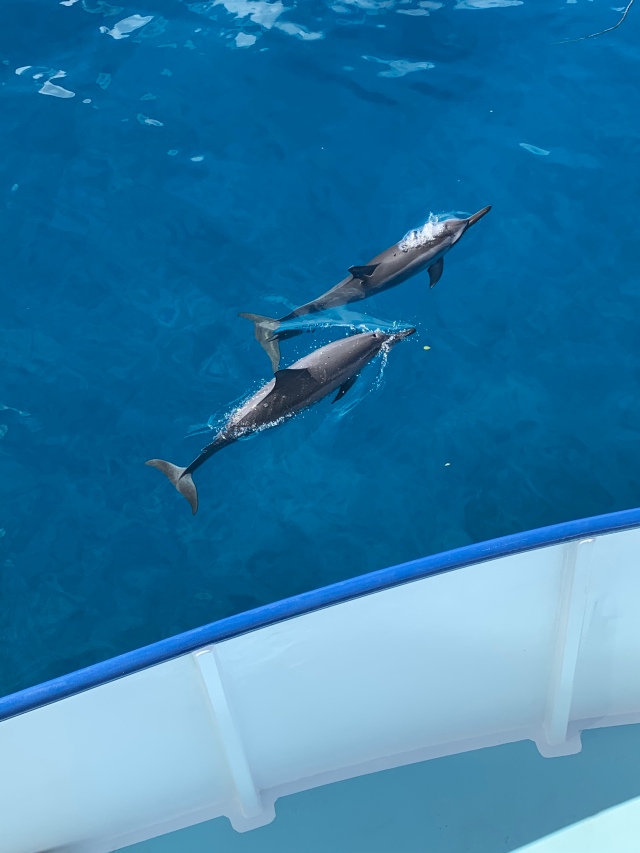 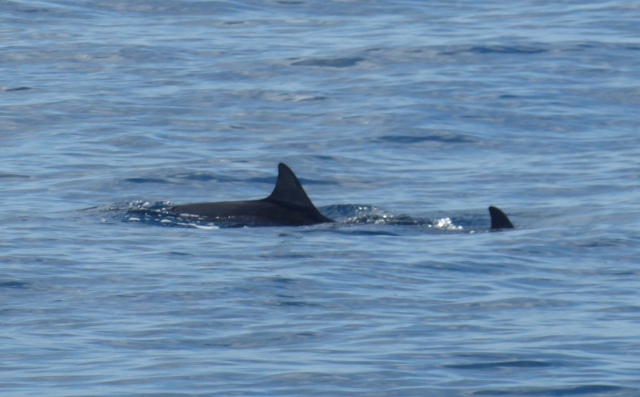 Our captain was Alex. He said they haven’t been seeing so many dolphins lately so we were lucky. 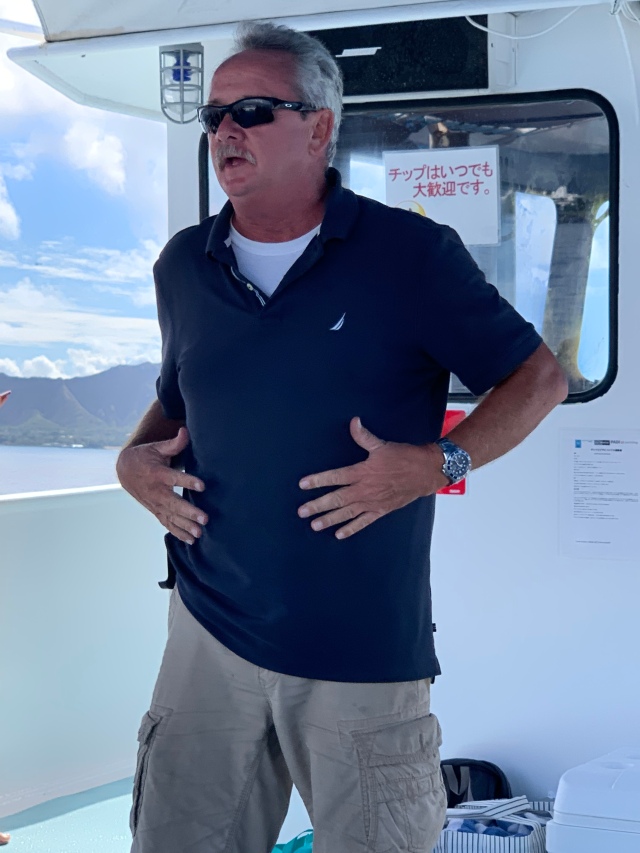 But will we see whales? Just a short while later, we saw the spouts! All told we had three different sightings. Alex said that these humpback whales are about 45 feet long. They spend about 6 months of the year in these waters where they have their babies. The rest of the year they are in Alaska. During their time here, they do not eat at all even though they feed their babies. Then in Alaska they feed all the time – on krill which is their preferred food.

We also got some nice shots of the shore, including Waikiki Beach and the hills beyond. 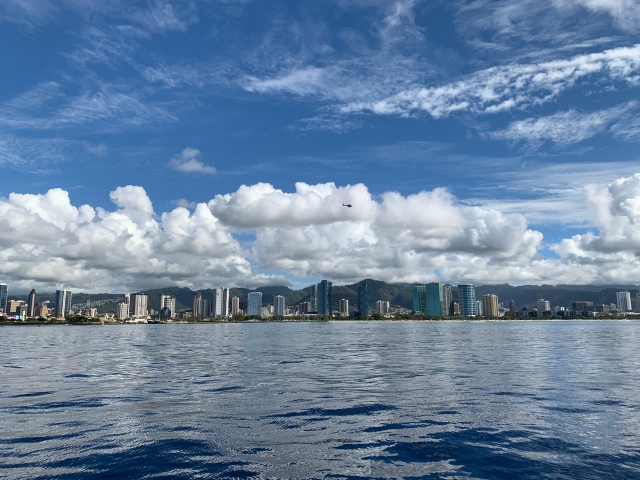 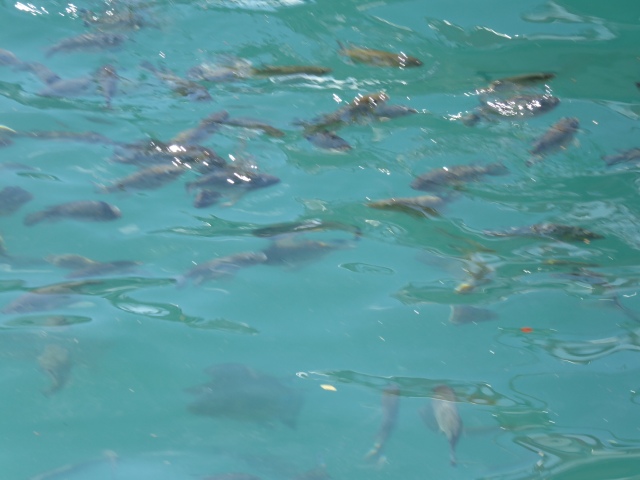 We asked Alex for a lunch place near the docks and he recommended Wahoo for the fish tacos. Excellent!

We did a lot of walking, did a bit of shopping to get a couple of items we needed and the local chocolate for our cabin staff and butler.

Then back to the ship. Tonight they are showing Bohemian Rhapsody. We haven’t seen it yet so we are looking forward to that.

Tomorrow we are headed to Hilo.

This entry was posted in Excursions, February, Food, World Cruise 3. Bookmark the permalink.