The Bay of Islands consists of 144 islands next to the north island of New Zealand.  It has many beaches, deep sea fishing and a strong Maori culture. Our sail in this morning was just beautiful.

Our planned excursion was to meet at 8 AM.  It is a tender port and our first (and only) sighting of dolphins was from the tender into the dock at Waitangi Wharf.

Our excursion was on a catamaran – a cruise to Cape Brett and Hole in the Rock.

First, I have to say that this area is spectacularly beautiful.  We have been to New Zealand but not to this area.  In fact it is a first for our Captain and also for the Insignia.

This is one of New Zealand’s most beautiful marine areas.  It was made famous by the English explorer, James Cook and writer Zane Grey. It was the first area of New Zealand to be settled by Europeans.

We got a map of the islands in the area we would be traveling. 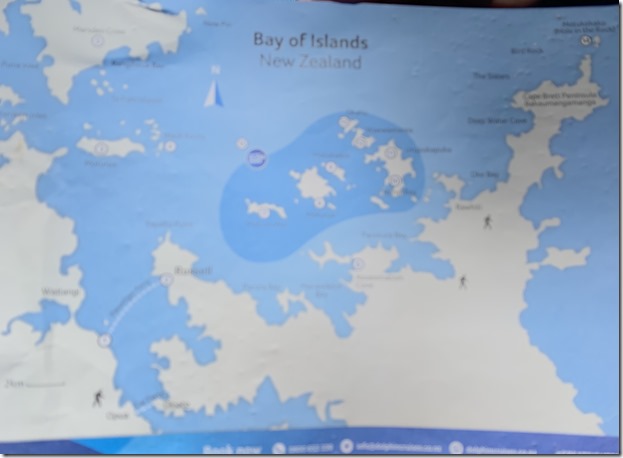 We left from the tender pier at Waitangi Wharf.  This is on the left side of the map just up from #1.  We were dressed pretty warmly because it was only 70 degrees F and there was a 40 mph wind. Our captain provided commentary and it was nice to have the map so I could label my pictures according to the locations he described.

We traveled first to #7 on the map, Motuarohia island. It is also called Robertson Island and the area of water is called Cook’s Cove. There are 40 Kiwi birds living here but they are nocturnal so we didn’t see them. Now the Robertson family and retired airline pilots have seasonal vacation homes here. 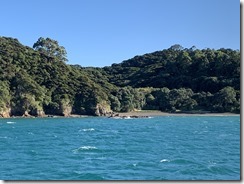 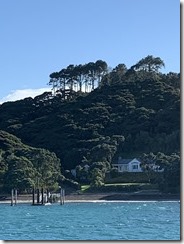 The next island we passed is Moturua Island (#8). This is home to many endangered bird species in a protected wildlife preserve. You can also see the cave in one of the pictures. 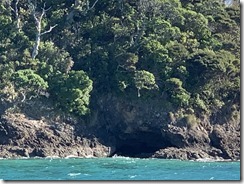 If you look closely, you can see Smokey the Bear in the last picture.  The slanted building is a nine level hotel.  There are no private beaches in New Zealand, so even on these remote islands, anyone can come and use the beach.

Next was Urupukapuka Island (#11), the largest island in the bay.  This is a recreational reserve and farm park covering about 520 acres with lots of walking trails and beautiful beaches. It is the only island you can camp on.  There are only 3 native animals in New Zealand, all the rest were brought in. All three are types of bats. Due to rats that were brought in, there was a lot of damage to bird life here.  Programs have been designed to eradicate the rats and the island has been predator free for 10 years. You can see the sheep on the hillside. 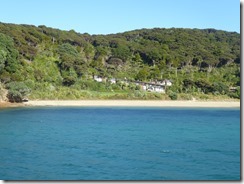 The waves were quite choppy once we moved out of the area that was protected by the shore.  You can see Cape Brett lighthouse on the hill.  The iconic lighthouse was first lit in 1910, and it still has its internal workings. The light was unique in that it was the first light of three in New Zealand to utilize mercury bath technology. Our captain said that the mercury bath technology created more flash for the cash.  Now it is the only one left in the world.  Back when there were 3 lightkeepers, there were 15 children and a Clydesdale named Toby. Lightkeepers lived here from 1910 – 1978 when a new automated light went into service. Now you can stay in the lighthouse for $15/ night but the only way to access it is boat, helicopter or an 8 – 9 hour walk!

We then went to the Hole in the Rock which is at the end of Cape Brett – and in calm conditions, boats can pass under the rock itself which is a 60 foot high passage.  Today it was much too windy and ch0ppy to do that. Still impressive though.

On the way back we passed Waewaetorea Island (#12) – 115 acres with many beaches- it is a recreational reserve.

#13 Okahu Island is a scenic reserve of 53 acres and is also known as Red Head Island as it has a red soil. There is only one beach here and also a wind weather station.

There are 3 privately owned islands here.  We passed the town of Russell (Kororareka), a historic seaside village which was a base for the whaling industry in the 1830’s and was formerly known as “the Hellhole of the Pacific” due to the rowdy behavior of its inhabitants! It was also once the capital of New Zealand.

There are also a lot of small beautiful islands – too many to put in this posting. But here is “turtle island” which our captain said is a lady – because of the eyelashes! 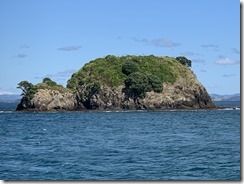 When our tour was finished we went to the town of Paihia.  There was a shuttle that we took one way and then walked back along the seaside.  A wonderful craft fair with all New Zealand products was here and I did make a few purchases. It was a really nice surprise. On our way back we passed the Waitangi Treaty House and Grounds which is one of New Zealand’s most important historic sights.  In 1840 the Maori chiefs and the British Crown signed the treaty here that became the founding document for New Zealand. 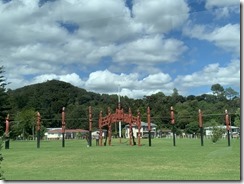 A couple of fun signs:

We got back to the ship in time to see the Academy Awards which were on at 2 PM here (Monday!).  I have to say that I like an afternoon awards show.  Especially with the goodies – both main dishes and desserts – with popcorn – that the culinary team prepared.  We even had a red carpet. We both did ballots, will see how we did later, I guess.  Didn’t get the best picture or best actress right for sure. 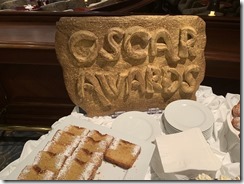 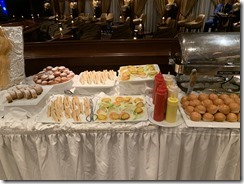