Last night we had the guest – crew talent show. The theater was packed and it was a really fun night.  Among the guests there was a magician, a couple of singers, a trumpet player, a harmonica player, a tango dancing couple, Hawaiian dancers, a story teller (great fun) and our Zorba dance closed out the show. One singer from the crew performed a Brazilian song and she was fantastic.  I know that people took pictures and video of the Zorba so I will post when I get them.

Today was the boat building competition that always happens a couple of times on a long cruise.  There were three entries, two pretty serious entries and one not so much.  Here they are: 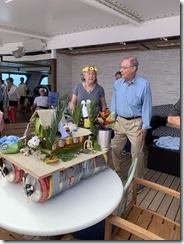 Our captain and staff captain were the judges and the team with our friends, Mike and Maralyn (in the individual pictures), won the top prize of big O points – each team got champagne as well. Theirs was really a work of art, and all 3 were seaworthy.

Just before the competition on the deck, the captain made an announcement that we would be getting in to Sydney tomorrow instead of Monday because of a medical emergency on board.  I found out later that it is a crew member.  So we will have an unexpected overnight in Sydney.  We will arrive about 4 PM tomorrow.

In the afternoon, Norm and I both went to an Around the World wine tasting.  There were many different wines to taste!  They were from Classic Europe, Southern Hemisphere, USA and France.  The head sommelier, Lubo, who is so knowledgeable, was hosting, with his whole team. I tasted about 6 of them and made some notes but I know that Norm had a much more robust tasting! This was held in the Toscana restaurant and about 60 people were there. 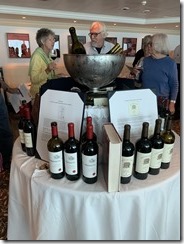 I won the blackjack tournament both yesterday and today.  Lalo is trying to talk me into playing in the Texas hold’em tournament and I may just try it one day.  Today, though, we had another jewelry making class with our Polynesian lecturer, June.  We made this mother of pearl necklace, and the most challenging part was the knot tying to make the sliding cord that changes the length of the necklace.

So even though it is for a reason no one wants to have happen, everyone is looking forward to an overnight in Sydney.

This entry was posted in At Sea, March, South Pacific, World Cruise 3. Bookmark the permalink.