Our arrival in Tokyo was quite spectacular.  We didn’t know that it was the first time that the Insignia was in this port of call and there was a ceremony with the captain which our friends Karin and Bill got to attend.  They are the most traveled passengers on Oceania.

Fireboats greeted us at around 3:30 with the spray of their hoses. I did put a video that Norm took on Facebook while on shore. But here are the photos.

Arrival had been planned for 4 PM and we were just a little later than that.  The temperature is only in the 50’s!

Here are some other pictures of our approach. 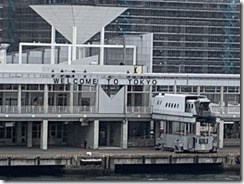 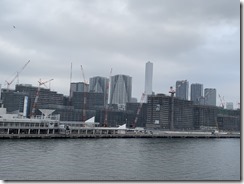 We had a wonderful Around the World special event tonight at the Hotel Gajoen Tokyo.  It was a 30 minute bus ride to get there and we had a guide on the bus named Kitty.  We passed the Olympic Village which is under construction for the 2020 Tokyo Olympics.  There will be 10,000 condominium units built there and guess what – they are already sold to people who will move in after the Olympics. The village is very close to the port. 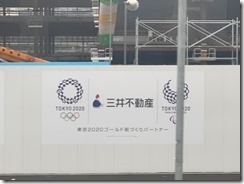 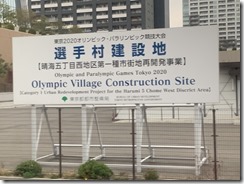 127 million people live in Japan and 13 million live in Tokyo.  It is very crowded.  Many people are wearing masks here too, and unlike Kyoto, here in Tokyo the cherry blossoms are in full bloom.  The cherry blossom season is very significant in Japan and means new beginnings to them.  School starts in early April, university graduates get their first jobs, and this year, the emperor will abdicate the throne and the crown prince will become the new emperor.

When we arrived at the hotel for the special event (and remember, there are over 340 world cruise passengers, so this was a real feat to pull off), we were mesmerized by the beauty and the size of the hotel.  Just walking to the ballroom where we would have our dinner and entertainment was a delight.  Here are some of the beautiful sights. 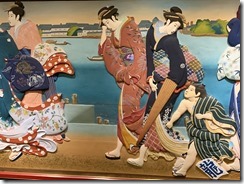 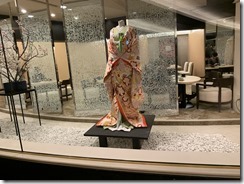 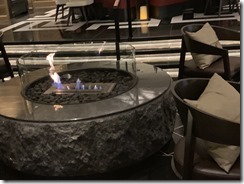 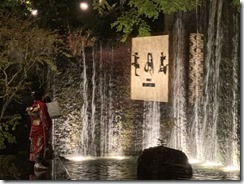 We were welcomed by performers on the Japanese harp.

We had a traditional Japanese meal – of 8 small courses.  Here is the menu.  The sushi was not listed on the menu.

And some pictures of our friends,  the venue and the food. 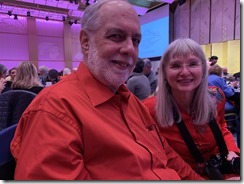 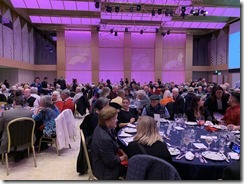 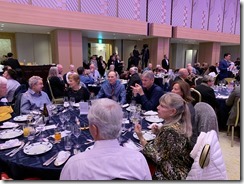 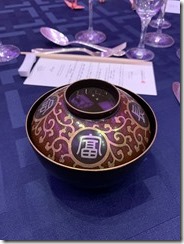 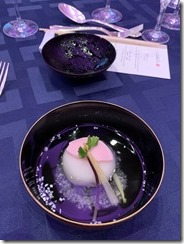 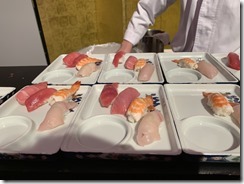 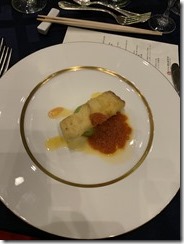 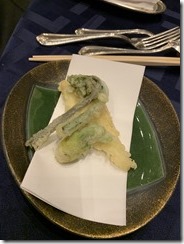 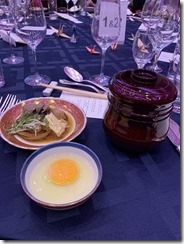 You can bet I didn’t put that raw egg in my dish.  But Norm did… We also had wine and saki with our meal. We could watch the sushi making demonstration, although we can see that every day on the ship!

During and after the meal, we were entertained by Miyabiya Japan Show which consisted of kabuki (only men are allowed to do kabuki dancing), geisha, ninja, samurai, shamisen, Japanese magic and more.  Some of the dances go back as far as the 17th century in Japan. And of course we could have photos taken. 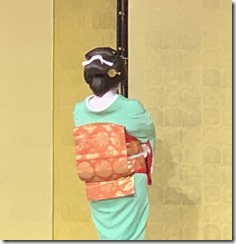 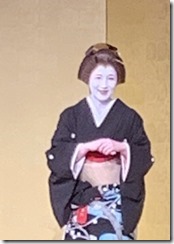 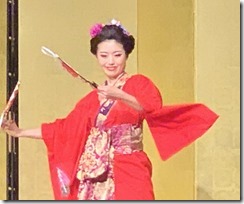 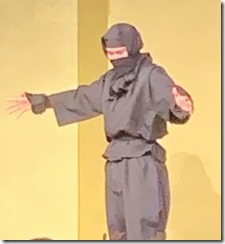 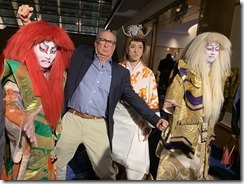 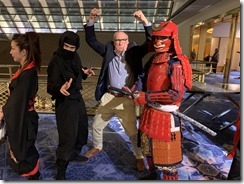 After the event, we went back to the ship – it was too late already for the evening show which was from Tokyo, flute and Japanese harp.  Luckily we had the harp at our event.

Early departure tomorrow for our tour of Tokyo.