Well, it is hard to believe that 5 weeks from today we will be home.  It always seems to go too fast, but we will savor these last weeks.

Today we docked at the port of Piraeus, the first chief port in Greece, the largest passenger port in Europe and the second largest in the world, servicing about 20 million passengers annually.  It is also among the top ten ports in container traffic in Europe and the top container port in the eastern Mediterranean. The city hosted events in both the 1896 and the 2004 Summer Olympics held in Athens.

Here are some pictures of our sail in. 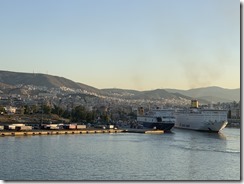 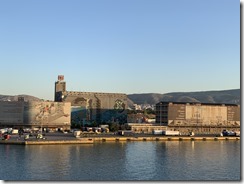 We haven’t been to Athens in over 15 years in spite of our travels, neither of our previous world cruises came to this port.  So we decided to do a tour called the Best of Athens and Cape Sounion.

Our tour guide was Elaina, and she was very informative. And the weather was perfect, it has gotten delightfully cooler.

She spent quite a while on tales of the Greek gods and goddesses – legends to be sure and every culture has them.

We went to the Acropolis first because she said the crowds would be less earlier in the morning.

She also talked a lot about Greece’s financial problems.  When the problems came to a head in 2010, the minimum wage was cut almost in half, from 750 Euros per month to 400.  Retirement income was cut by the same percentage. Unemployment in this area was almost 60%. Prices went up so everyone was even more impacted.  Younger people either left the country (about 200,000 left) or were forced to live with parents, postpone marriage and families and search for jobs, which also impacted the economy to say nothing of happiness, and things were just as tough for the parents. Many stores and businesses were forced to close.  A dire situation which is slightly better now but they are hoping for improvement. Gas is between 1.60 and 1.75 Euros per liter which is over 6.50/gallon.

Tourism is about the only thing keeping them even a bit ahead and she says that occupancy in the island resorts is 100% in high season, which is great for them.

On our way to the Acropolis, we passed two of the Olympic stadiums and some beautiful harbors. 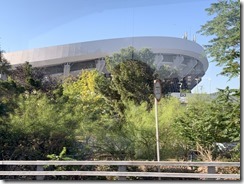 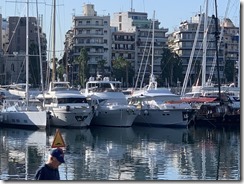 The Acropolis.. how to describe it.  Norm’s oxymoron is “beautiful ruins”, and indeed they are.  This is the sacred city of the ancient Athenians.  The most important buildings were constructed by Pericles in the 5th century BC.

We entered through the Propylaea, the gateway to the winding path to the top of the Acropolis. Is this their guard dog?

From here we went to the Temple of Athena Nike. 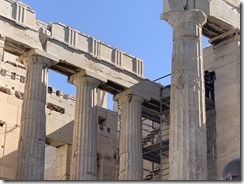 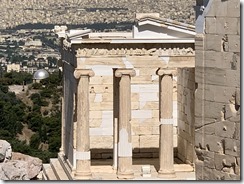 The Erechtheion is a temple built as a shrine to Athena (and in case you didn’t know, Athens was named after this goddess), and the twin deity Poseidon – Erechtheseus. The most distinctive feature is the ingenious design of the six support columns carved in the shape of maidens.  Some of the original statues are on display in the Acropolis Museum. 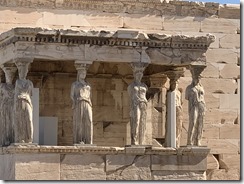 The Odeon of Herodes Atticus and Theatre of Dionysus are amphitheaters on the south slope of the Acropolis.  You can only view these, but performances are still held in the Odeon and those with tickets can go inside.

The views of Athens from here are also quite amazing. 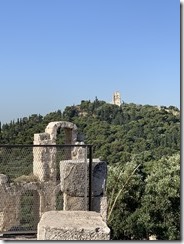 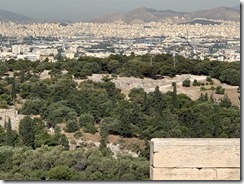 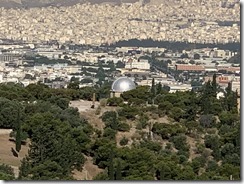 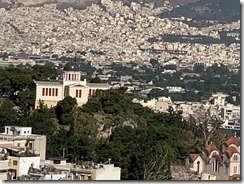 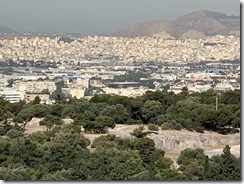 The Parthenon sits at the highest point of the Acropolis, 230 feet above the city.  It was built to honor the goddess Athena and has been the model for thousands of buildings throughout the world.  There are some columns on display with the center hole visible.  Lead was used in these cavities to stabilize them.  Elaina explained that the historians have evidence that the way the columns and blocks were brought to this high point in the city was to use trees as rollers with the blocks or pieces of the columns on top and then roll them up the hill.  Painstaking work I would say, but the results are impressive all these centuries later. Restoration work is constantly in progress as you can see from the iron bars.

We loved that Elaina had us use the earphones so we could hear everything she described. 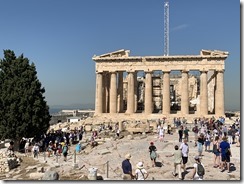 We had time to explore the whole site.  The areas to walk around the structures are quite slippery and one of our fellow passengers did twist her ankle.

You can see that there are a lot of people there, including school groups.  I asked if it was a typical crowd, and Elaina said it was quite light!

After our visit, we spent a bit more time on a scenic route in Athens on the way to our lunch stop at a Greek Taverna.  They are common all throughout the country.

These orange trees line the streets.  Elaina said they are really ornamental oranges and not suitable to eat.

We saw Hadrian’s Arch, the tall gateway from 131 AD that connected Ancient Athens with the Roman quarters. 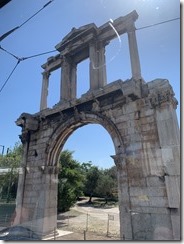 We also stopped at the Panathinaiko Stadium which was the site of the first modern Olympics in 1896 and was built on the site of the original Olympic Stadium from 330 BC. 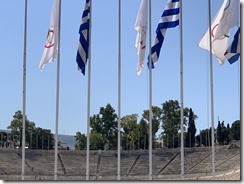 It was hard to get good pictures, but it is very impressive.

We also passed the Presidential Mansion which now houses the Parliament.  The guards today were in regular uniforms, but we spotted this man in similar dress to the formal attire that is worn during the changing of the guard ceremony.  According to Elaina, the shoes alone weigh 6 pounds each. 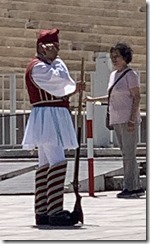 Next we traveled to Attiki, northwest of Athens, for our lunch at the taverna O Moypoyzhe.  And what a lunch it was.  They could have fed twice as many people!  The white wine was mediocre but the food was amazing. We saw this interesting sculpture of an athlete on the way. 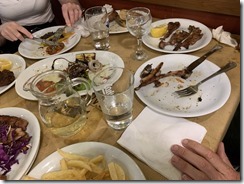 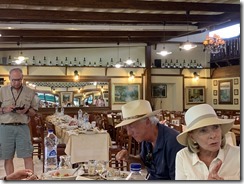 Our trip to  Cape Sounion was so pretty as we rode along the coast.  There is some fish farming going on here. And the trees are pistachio trees! 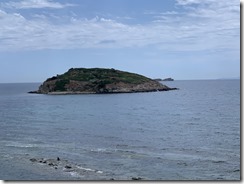 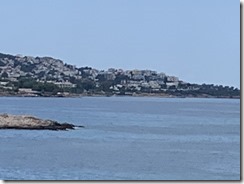 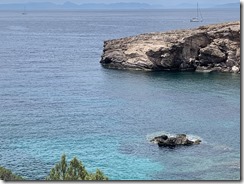 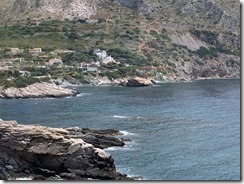 The Greeks chose their temple sites by considering both the natural beauty of the location and its appropriateness to the god in question. Cape Sounion is the site of the Temple of Poseidon which is located on a magnificent seaside cliff on the southernmost point on the Attica peninsula.  It is a perfect spot for a temple dedicated to the god of the sea!

You can see some of the Aegean islands.  The beauty of the surviving Doric columns has inspired countless writers and poets, including Lord Byron. 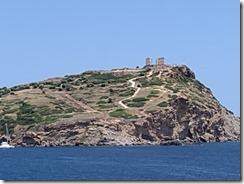 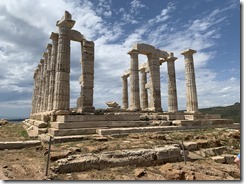 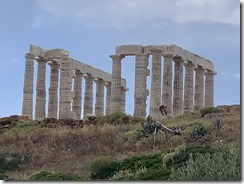 We headed back to the ship and enjoyed a terrific Greek dinner buffet by chef Mario and his staff. 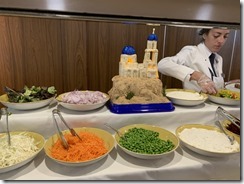 There are so many ferries here that take people to the other islands.  Here are some sail away pictures. 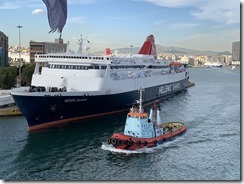 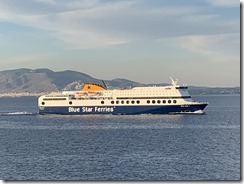 Bye, Athens and Greece.  We shall return!

This entry was posted in Europe, Excursions, Food, May, World Cruise 3. Bookmark the permalink.