This is our first stop in Germany. The forecast was for rain so we opted to tour the town vs going with the Walk and Discover group on the hike where we would not have visited the town. As it turned out, it didn’t rain until we were back on the ship. But the town was charming with plenty to see.

First, though, It want to mention something unique from Melk that I forgot to write about yesterday.

We saw a reusable coffin! It had a trap door that could be opened by a lever when the coffin was placed inside the grave opening. The reusable coffin was invented to accommodate a 1784 decree by Holy Roman Emperor Joseph II. He ordered that bodies must be interred without clothes in linen bags to save wood and hasten decomposition. Under the decree, coffins could be used only for transporting the body to the cemetery. Joseph’s decree was so unpopular that it was never implemented. False but persistent claims that the body of Mozart, who died in Vienna in 1791, was placed in a reusable coffin are reflected in the movie Amadeus.

Passau is close to the Austrian border in Bavaria. People here actually consider themselves more Austrian than German. It is known as the “city of three rivers” because the Danube is joined here by the Inn and the Ilz. Because of this, the town has had many major floods and there is a wall that has markings that indicate the year and the water level. 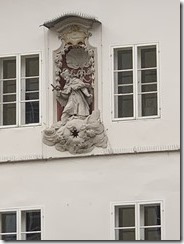 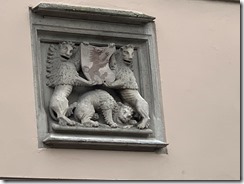 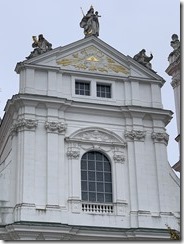 Our cruise director, Jessie took us around the town- it is one of her favorites. We have the whisper system with earphones that recharge in our cabins which makes it easy to hear the guides even if we get separated by short distances.

Jessie told us about the town’s history and the manufacturing of swords here. The symbol of the town is the Wolf and it was stamped on the blades of the swords which the warriors believed would protect them. 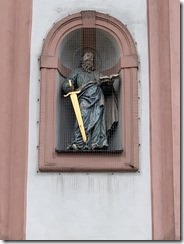 Here is a lot of dark history here including the hangman, which pretty much every town had back in medieval times. Also Nazi history – Hitler lived here as a boy and Himmler lived here for a period too.

Most of the town is in Baroque style as a result of rebuilding after a devastating fire in 1662 when most of the city was destroyed.

We visited St. Stephen’s Cathedral (yes, every town seems to have a St. Stephen’s!) which has the world’s second biggest organ with 17,774 pipes and 233 registers. It is a beautiful example of Baroque architecture. 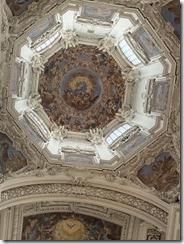 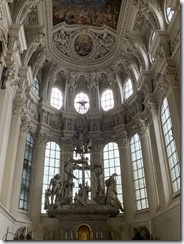 The Old Residence and the New Residence housed the clergy and now are used as museums. Also beautiful Baroque buildings.

The Old Town Hall has a pretty garden courtyard and interesting paintings on the outside. 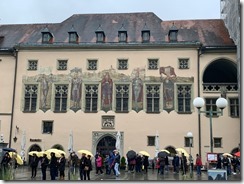 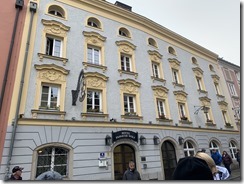 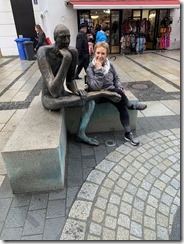 We had time to walk the streets and alleys and to visit another church (there are 47 here) where we sat to listen to the organ. One of the shops had magnificent cuckoo clocks of all sizes as well as nutcrackers and ornate beer steins. It is beer country after all. Jessie says you have to have a sausage and a beer in every town! As we travel further north, it will be more wine country but Bavarian beer is the thing here!

As I write this, we are going through one of the 66 locks and it seems like the concrete wall is just inches from our cabin and its floor to ceiling windows! Very interesting to pass through so many.

Tomorrow we will be in Regensburg. We are enjoying this ship, the friendly staff and the other passengers. We have met people from Australia and the UK and just a few other Americans. Great to chat with them and, as always, learn from others.

This entry was posted in Europe, Europe trip and river cruise, Excursions, November. Bookmark the permalink.