Many days at sea

Well, I decided enough is enough and it is time for a post.  With updates!  So we are missing our first port after six sea days which means eight sea days for our crossing.  The port is the first of two in the Azores, Ponta Delgada and the captain informed us late yesterday that the weather will be too rocky to get to that port, so we will have two extra days at sea. He has informed us that tomorrow the waves will be smaller but will pick up the next day.  17 foot swells are reported but we don’t mind it, we get rocked to sleep and I can still do dancercise and line dancing.  The dancers say the trick is to slightly bend your knees and you get more stability that way.

This rainbow was spotted from our deck walk this morning.

Today we were invited to lunch with the General Manager, Marck Warmenhoven who is from the Hague, Netherlands.  We had a great conversation with him and were surprised that it was just the three of us at the table.  Apparently we are the most traveled guests on this segment of the cruise.

Here are the previous summaries of the days.

Six sea days in the Atlantic on the way to the Azores.  We get the Currents newsletter every day with all of the activities on board. Those of you who have been on cruises, especially on Oceania, this will be familiar. But ship life is interesting on sea days so for my readers who are not familiar, I will write about what goes on when not in port.

There is a coffee chat with needlepoint every morning – they give you a kit and if you finish it, you can get another. For me, not likely!  I really have never liked needlepoint, but I DO like the chat part and have met several new friends.

Then there is line dancing – THAT I like!  We usually learn a new one or two and practice the others.  Our assistant cruise director, Jason, is a hoot and makes it a lot of fun.  It is even more fun when the ship shifts side to side just enough to make you lose your balance!

There is a culinary center on board and I didn’t know to sign up ahead of time (we didn’t have this on the small ships)  so most of the classes (which are hands on) were filled.  I was told to go and hang out in case someone didn’t show up, so I did that, two people didn’t show up and I got to do the first recipe, then they came 23 minutes late and I got kicked out!  I think they should have shown up on time, but… I did get to sign up for the Asian one and am on the waiting list for others.  It is a beautiful set up.

Our shows have been good, the theater is large and has comfortable seating. Last night (March 22)  we had an Irish comedian, George Casey, who made us laugh out loud! The onboard entertainment team is very talented too and their first show was called Brill and was about the building in NYC in which many songs of the 60s were composed.  Think Ronnettes, Shirelles, etc.  Norm and I had never heard of the building or that there were so many songs that emerged from it – so even the history was fun and the music took us on the way back machine.

I do play blackjack and enter the tournaments which are held every sea day.  Today (March 23) I won!  Yay!!  Sometimes I play 3 card poker too but I think the way you play that is you place your bets and the casino collects them.  It is rare to get a really big win there but it is fun and of course the casino is where I meet people too.

I had a wonderful hot stone massage and went to a ladies pamper party where we got facials.  Norm had a massage today too.

All kinds of sport activities here, dancercise, golf putting, shuffleboard, bean bag toss, table tennis, paddle tennis, and croquet to name a few.  You get these big O points which you turn in at the end of the cruise for mostly unnecessary items but people make quite a sport of collecting them for some reason.  We have 0 big O points.

Norm generally attends the enrichment lectures which are quite good, right now there is a series on oceanography, one about Chelsea and one on iPhones.  They have chess, bridge, trivia and of course – bingo.  And jewelry demos, wellness lectures, all kinds of other activities.

We were invited to a wine tasting tomorrow and lunch with the general manager on Saturday.

We have not had to be tested for COVID yet and the information we have so far says to disembark at our upcoming ports we need to bring proof of vaccination – we don’t yet know if any will require testing.  If they do, we will get complimentary tests on board.

Guess that is all for now.  Tonight’s entertainer is a pianist – Linda Gentille.  I believe we heard her on another cruise and enjoyed her. If you can find her on YouTube, watch her fingers fly as she plays.

The food is as amazing as we remembered.  So far we have had dinner in three of the four specialty restaurants – Toscana, Red Ginger and Jacques.  All were excellent and we plan the other one with a good chance we will add a few more reservations.  And on the next segment we have reservations for all four as well.

My cooking class will be for the Red Ginger recipes and I got into another waitlisted one, Viva Espana – apparently that will be tapas.

As I mentioned, we had dinner in Red Ginger –  it is a favorite and is not on the Insignia – the ship for our world cruises.  I had to take pictures of the food. 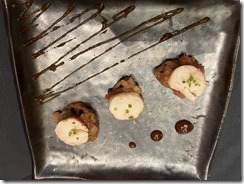 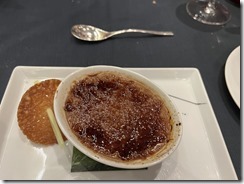 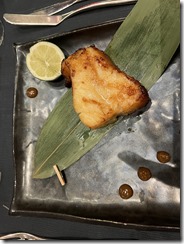 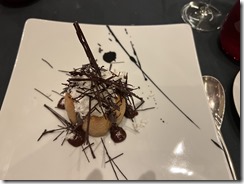 We were waitlisted for a tour we really wanted to do in Malaga, Spain – Grenada of the Moors and Alhambra.  It is one that is non refundable, so we doubted we would get in since probably no one would cancel, but we got word that we can go.  I suspect they added more spots but don’t know for sure.  I am sure I will have lots of pictures from that, it is on March 31.

Michelle Montouri had a second show and finished with the theme from Titanic – she came out in this outfit.

I got this plaque as a gift (thank you, Bill) and decided to paint it in the artist studio on board.  I am pleased with the way it came out.  We plan to hang it on our door on our next world cruise in January 2023! 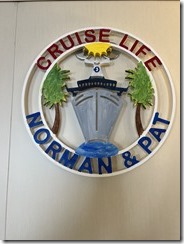 Guess that is all for now, long post but lots of sea day info to cover.  Our next port is Funchal in the Azores, on Tuesday.

This entry was posted in At Sea, Food, March, Spring Cruise 2022. Bookmark the permalink.

4 Responses to Many days at sea