Posted on September 8, 2015 by patmathews

We were at anchor at 11 PM last night awaiting our turn to transit the Suez Canal which started this morning at 4 AM.  We had a lecturer, Hassan Eltaher, in the Horizon Lounge starting at 6 AM which Norm attended and took pictures from the deck.  I woke up later and joined in with the photos.

First a bit of history.

The first part of the canal was completed between 1860 and 1862 after many attempts to do so.  It had an immediate and dramatic effect on world trade and played an important role in increasing European penetration and colonization of Africa.  It was under the control of the British under the Anglo-Egyptian Treaty of 1936.  In 1951, Egypt repudiated the treaty and Great Britian agreed to pull out by 1954.  President Gamal Abdel Nasser nationalized the canal and this caused Britain, France and Israel to invade in the week long Suez War.  The canal was closed due to damage and sunken ships until April 1957.  Then a UN force was established to maintain the neutrality of the canal and the Sinai Peninsula.  Since 1974 the Sinai has been protected by a UN peacekeeping force.

The canal allows the passage of ships up to 150,000 tons.  The canal is 120 miles long, there are no locks in the canal and passage can take from 11 – 18 hours. Ships can travel at 8 knots maximum and they are allowed in at about 15 minutes apart.

Our ship pays $150,000 to transit the canal, and the fees constitute the second biggest revenue for Egypt.  (Tourism is still the first)

Last month, Egypt officially unveiled its expansion to the Suez Canal.  It was completed in one third of the time originally estimated.  An additional 22 mile shipping lane has been added along with widening of the current canal. When fully operational, the widening will increase traffic from 50 ships a day to 97 and reduce the time to travel the canal from 18 hours to 11 hours. In the first month of opening, the number of ships already went from 49 to 70 a day.

The east side of the canal is the Sinai desert and the west side has a towns along the way.

We were advised by the captain that we would be out of the canal and into the Red Sea by about 3 PM, which would make it an 11 hour transit for us.

Here are some of the pictures:

Very hazy out, hot and lots of flies! This shows some of the barren land

A view of a bridge across the canal from the top deck of the ship.  The bridge is closed and hasn’t been used for years due to fear of terrorists 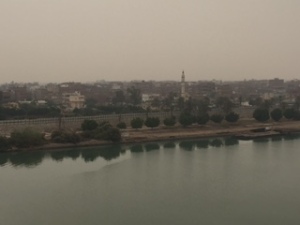 One of the towns along the way

In some areas ferries take people across instead of bridges, which are closed due to fear of terrorists

Workers within the fence lining the canal

Ferries that take trucks across the canal 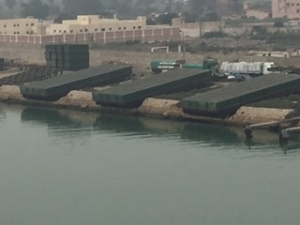 Just about to pass under this bridge,  unused due to fear of terrorism

This sign is about halfway through the canal…welcome to Egypt 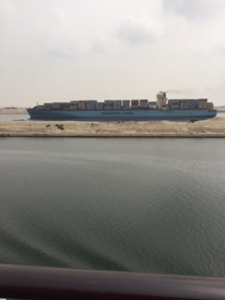 Here is a spot where you can see the new two way traffic – the container ship is going the other direction. Taken from our balcony

Tomorrow we will be sailing in the northern part of the Red Sea, in transit to Jordan, where we can’t wait to visit Petra.

I forgot to write part 4 from Israel – Between the Med, the Red, the Dead and the “dread”. They are always wary of threats from their neighbors, especially Syria these days.

1 Response to Transit the Suez Canal