Early this morning we arrived at the port of Aqaba on the shores of the Red Sea.  This city is at Jordan’s southernmost tip and is transforming into a luxury vacation destination.  It is known as the second best snorkeling and diving site in the world (after the Great Barrier Reef in Australia). The movie “Lawrence of Arabia” was filmed in Aqaba. It would probably be an even more popular destination if it weren’t for the unrest in neighboring countries.

Jordan has a population of 8 million and 3 million are refugees.  It is a crossroads between Africa, Europe and Asia and where it borders on Israel, it takes only 15 minutes to get there. 3% of the population are nomadic Bedouins.

When we were coming in to port and when we arrived, it looked so foggy we couldn’t see the sun.  We thought it was fog, but no, it was a huge sand storm and it persisted pretty much all day, although less in Petra.

We set out at 7 AM on a private tour to Petra – just 8 of us – that we booked with fellow members of Cruise Critic.  The company was Via Jordan and our guide was Ashref, the van driver was Solomon.  Of course we heard a tour guide joke right away.

It was a 2 hour trip to Petra.  On the way, we passed Wadi Rum, another popular destination to visit.  Wadi means valley and the desert scenery there is said to be spectacular.  That will be for another visit.

We passed several Bedouin tents with camels and goats nearby, the goats can be tended or wild, and once in a while there were goats or sheep crossing the road and camels or donkeys right along side of the road.

We traveled through Wadi Musa which is the valley of Moses, and on the Kings Way, the most ancient road.  We asked how they get water here in the desert, and it turns out that there are underground lakes and water is piped to the cities.  Ashref thinks that in 10 years, though, water will be more costly than gold.

As we passed small villages, Ashref told us that the rebar sticking out of the top of the houses is because they are waiting for the son to get married, they then add another floor to the house and the son and his wife live there to care for the parents as they get old.  The society is very family oriented. Here’s a picture of that.

It was 108 degrees out so we slathered on the sunscreen, took our hats and lots of water.

Petra is something that is so hard to describe.  Ashref grew up there and knows just about everyone we run into.  He calls it the collaboration of nature and culture.  It is the most mysterious ancient city in the world.

We had a wonderful day.  Ashref took about 3 hours to walk us to the end, describing the various colors, excavated objects, tombs, waterways, etc.  Then we spent several hours exploring on our own. The Nabataean Empire, which dates back almost 2000 years, showed a remarkable ability to thrive with their water and building engineering.  The city was destroyed by a large earthquake in 363 AD, and that, combined with changes in trade routes, led to the abandonment of the city. In 1812, a Swiss explorer named Johannes Burckhardt set out to “rediscover” Petra.  He dressed up as an Arab and convinced his Bedouin guide to take him to the lost city.

Petra is known as the rose-red city, a name it gets from the color of the rock from which many of the city’s structures were carved.  The dead were buried in intricate tombs that were cut out of the mountain sides.  Pictures really can’t do it justice. 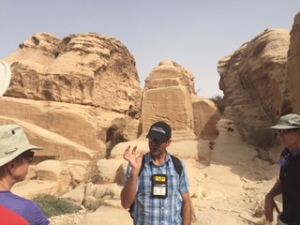 Ashref explaining some of the monuments

This is one of the Djinn blocks, monuments carved from the rock. with a tomb to the left of it 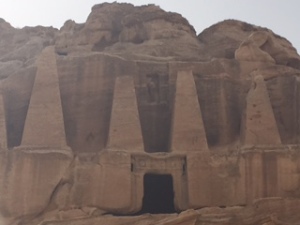 To get into the city itself, you walk through the Siq, a spectacular gorge that leads into the ancient city. It resulted from the natural splitting of the mountain.  Two water channels run along both sides. 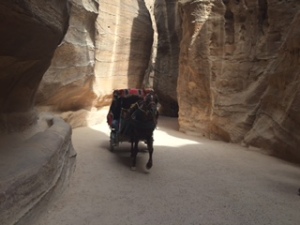 You can take horses or one of these carts in or out, but we didn’t do that as you really miss a lot of the beauty 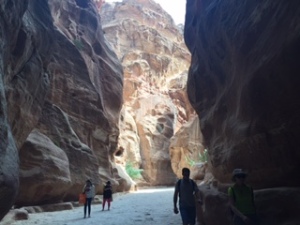 The Siq leads to one of the most well known buildings, the Treasury (El Khazneh),  and Ashref had us look at a rock behind us to determine what we saw, then he said “never mind, it is on the other side” and we turned to this spectacular sight: 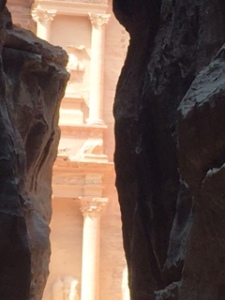 The Treasury is intricately decorated with figures, decorative bands and more and is said to be the mausoleum of the Nabataean King Aretas IV from 9 BC – 40 AD. It may look familiar to you because it was the backdrop of the film  “Indiana Jones and the Last Crusade”. The building stands at 131 feet tall and measures 92 feet across.

Here are some more pictures of this spectacular building:

Some people stop at the Treasury building, not realizing what lies past it.  We walked to the end of the site. We saw the Royal Tombs (and climbed up into them), the Church, the theater and the street of Facades. Lots of walking (10 miles total) but what a worthwhile day.  I thought I had quite a tan until I realized that it was the red soil covering my legs!

Here are some of the other buildings and excavations.  Brown University has been working here for about 15 years and has uncovered what was thought to be a market, but now seems to be a community center that had a swimming pool. 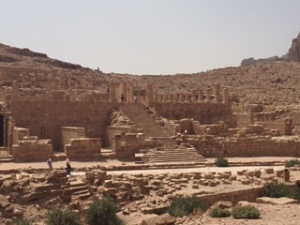 Carving of a warrior and a camel 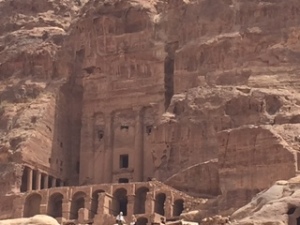 The Royal Tombs (they are way up on a mountain side) 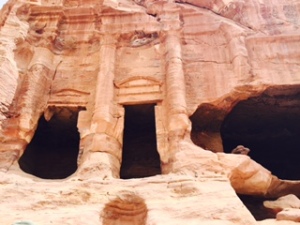 Part of the Royal Tombs up close 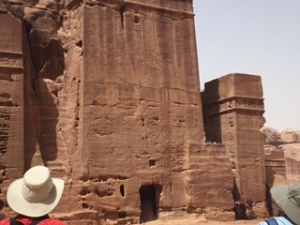 Part of the main temple

Mosaic floor in the church

Another view of the Royal Tombs 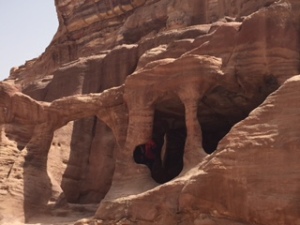 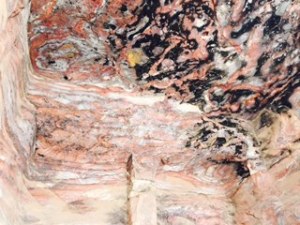 Spectacular colors in the ceilings of the tombs

Well, here is the type of sign you see outside the small snack stands! 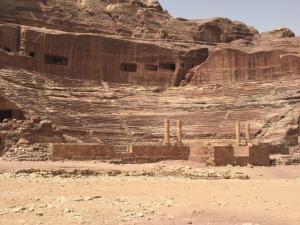 You can also take camel rides but we will save that for another excursion in this part of the world.

I got to meet the author of a book “Married to a Bedouin”, Marguerite van Geldermalsen, and she signed a book for me!  She was a New Zealand born nurse who was married to Mohammad Abdallah Othman, a Bedouin souvenir seller from Petra.  She made a home with him in a two thousand year old cave carved into the red rock of a hillside, became the resident nurse and lived like the Bedouin. She was widowed in 2002 and now divides her time between Sydney and Petra.  I feel lucky to have had a conversation with her and can’t wait to read the book.

The intrepid (and very tired) hikers:

Good thing we have 4 sea days to recover after 10 miles of walking in 108 degree weather!

This entry was posted in Asia, Excursions, September, World Cruise 1 and tagged Petra. Bookmark the permalink.