Here’s what I knew about Cambodia before arriving here today (for a first visit):

After we visited Vietnam several years ago, many people asked us if we had been to Cambodia – that it was very beautiful and the people were friendly.

The Khmer Rouge regime under the crazy and murderous dictator Pol Pot killed or caused the deaths of more than two million of their own citizens.

It is bordered by Thailand, Laos and Vietnam.

Their flag contains the symbol of Angkor Wat (where we will go on Friday – Sunday).

Our visit today confirmed the friendliness and welcoming nature of the people, but we didn’t see as much of the beauty.  We saw a lot of poverty and a lot of smelly trash all over the place. 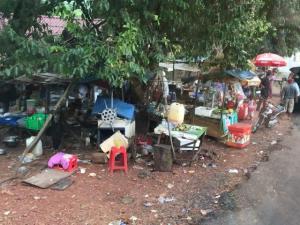 It is still a backwater and underdeveloped country in many ways. We were amazed by the dirtiness of the temples and temple grounds. Again, it is a country of contrasts, we saw more people driving the Lexus RX models than in any other country we have been to so far! And, we went to a beautiful beach. So we saw a lot of sides of this country by visiting this city of only 20,000.

Our guide was Wano.  He was orphaned when the Khmer Rouge killed his parents and grandparents and destroyed his home, most buildings, all the temples, etc. The regime was not driven from their strongholds until 1998 and even now, many of the former cadres occupy positions of power.  The country is still very much suffering from that devastation and nightmare. He was taken in by the monks and stayed there until he went to college. He completed his college education and got married.

Wano explaing the stupas of the dead

15 million people now live in Cambodia. Sihanoukville was hacked out of the jungle in the late 1950s to create Cambodia’s first and only deep water port.  It meant that the country’s international trade no longer had to pass through Vietnam’s Mekong Delta.

We first went to the Wat Krom pagoda. People here (if they can afford it), pay $3000 for a stupa in which to keep the ashes of their dead.  They are burned in a crematorium and then their ashes are in the stupa.  Families who cannot afford the stupa keep the ashes in their homes.

Yeah Mao, the black grandmother, looking to sea for the return of her husband

The children want to help you take your shoes off (for a tip of course!) 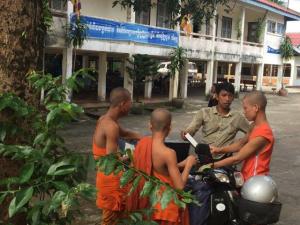 A vendor selling stuff to the monks 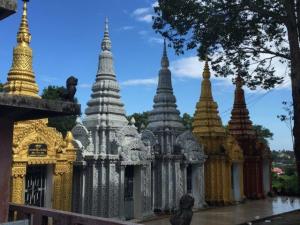 Stupas containing ashes. The plaques on the front describe the family members whose ashes are within

There is a pool with these statues all around it. Anatomically correct kids! 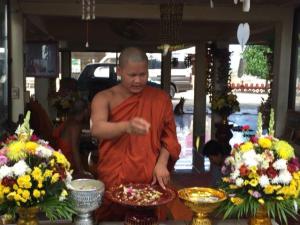 We visited a local family home where 16 people live.  They had an ingenius method of collecting the water for use, and had a ladder to climb up to get the coconuts. They had some merchandise for sale.  We didn’t buy anything but gave them a donation. They also had quite a collection of liquor!

The outside of their house

One side of the daughters’ room, 4 children sleep here. 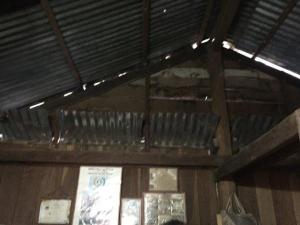 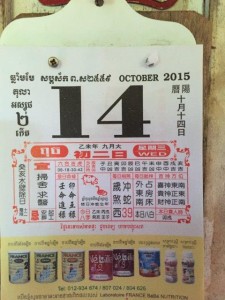 Their current calendar on the wall!

Some of the family of 16 who lives here, includes children, grandchildren, husbands, etc

There is a series of pipes on the roof that collects water into this collection area. Behind Wano is a woman going into their bathroom, pretty modern

Is that a bottle of Grey Goose on the far right?

A visit to local markets is always an eye opener, and this one was no different. The Lu Central Market is huge (more than 1000 vendors) and there is everything from extraordinary seafood, fresh vegetables, palm sugar, clothing, shoes, and much more.  I love taking pictures in markets!

Their answer to the tuk tuk, a motorcycle with a cart attached!

The durian, note that she is wearing a mask! 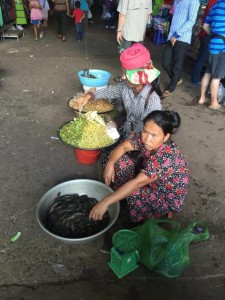 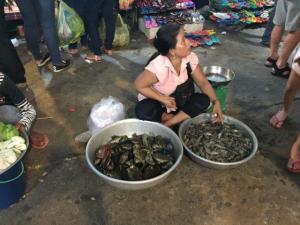 The Leu Temple (Wat Leu) was next, and here we saw young students and lots of children.  There were people begging at both temples and we wondered why the children were not in school.  Wano told us it is school vacation time.  The children were beautiful and enjoyed having their pictures taken.  The dining room in this temple is large and decorated floor and ceiling with paintings of the story of the Buddha. There is a beautiful overlook where you can see the city and the sea beyond. 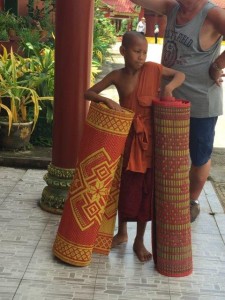 Rolling up the rugs after prayer

The dining room with magnificent paintings

View from the temple 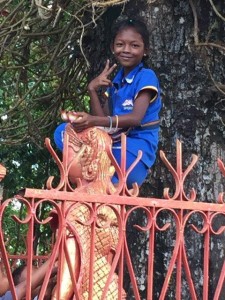 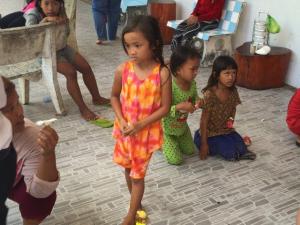 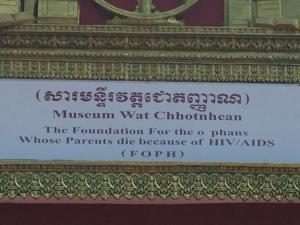 Wano was being blessed by the monk, this includes having water splashed on you.

The Naga is the 5 or 7 headed serpent that you see everywhere around the temples. Sometimes it takes the form of one head, much like a cobra, and is said to be the protector of the temple. 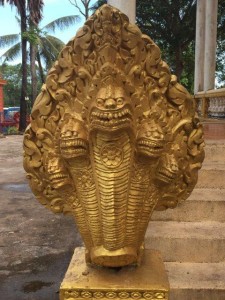 At the end of the morning till about 1:30 PM, we spent an hour at Sokha Beach Resort. This is a beautiful hotel and the wifi extended to the beach.  See what I mean by a country of contrasts!  We had planned to swim, but just had drinks and enjoyed the beautiful weather.  I also had a foot massage for $10.  Did I mention that almost everyone takes American dollars in every place we have visited, but the bills must be in pristine condition, no wear marks from folding, no slight tears, etc.  I had to try three times before I found a bill they would take!

The hotel is owned by Chinese people and they always have a dragon present which to them insures that businesss will go up.

Wano told us that they do eat dogs in Cambodia, usually in a curry, and they also eat a lot of snakes in a soup. Rice wine is very popular and costs $1 for a liter.

He also shared that monks don’t wear underwear (this I didn’t know!!)

The Golden Lion Roundabout is named for the statues of the lions – it was built in 1996 and is a symbol of the city of Sihanoukville.

They have casinos here but the local people are not allowed to gamble in them.  I wonder who does, based on the almost empty parking lot? 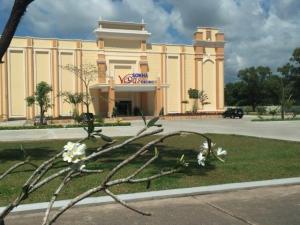 We spend tomorrow in Bangkok, but then we will travel for 3 days to another part of Cambodia, the temples of Angkor Wat, can’t wait to see the largest temple structure ever built.

Sailing out of the harbor there was a beautiful rainbow, a reminder of just how wonderful our lives are.

This entry was posted in Asia, Excursions, October, World Cruise 1. Bookmark the permalink.