Once upon a time, in a city called Mombasa in the country of Kenya, Norm and Pat had a great (or not so great) adventure!

We were greeted at the pier by a group of musicians and dancers and each given a beaded necklace or bracelet, a fresh long stemmed red rose, and a gift bag with a lion on it containing a DVD and map of Kenya.  A great start. 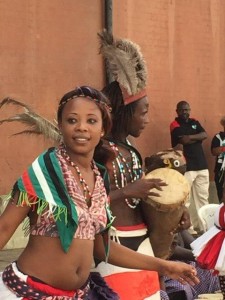 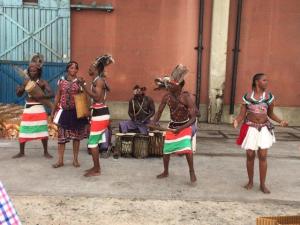 We boarded our bus (air conditioned, thank goodness) which would take us to Tsavo East Park where we would then board 6 passenger safari minivans.  The journey to the Park was scheduled to take 1 hour and 45 minutes.  This is where the adventure begins.  There is one road from Mombasa to Nairobi, the former being the biggest port in East Africa and the latter the largest, and capital, city.  Well, ROAD describes it loosely.  It is very narrow, very bumpy, mud in places with a pretty big drop off of the concrete, if there is any actual concrete in that section.  Much construction, large pot holes and sink holes are common.  And the trucks going to and from the port have no concept of staying in a lane, so they try to go around and come face to face with another vehicle which causes a standoff that can last for hours. We did have a police escort, which maybe helped, but the trip took just over 4 hours.  And two of the four buses (ours included) got stuck in the mud and we had to get out and into the other 2 for the rest of the ride. We saw people pull open the back door of a truck that was stopped and make off with bags of something, maybe rice??

yes, this is the road 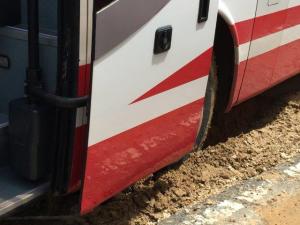 The country is very poor and many houses are made of mud.

We arrived at the park over 2 hours late- met our guide and went on safari.  Not much to see because by now it was the heat of the day and the animals rest then.  We did see gazelles, impalas, two huge elephants (crossed right in front of our vehicle), a kori bustard (large bird), a cape buffalo, baboons and some zebras, so we knew there was wildlife to be found. 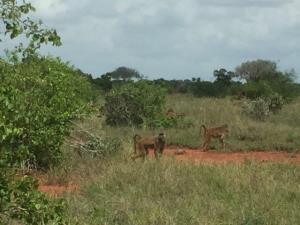 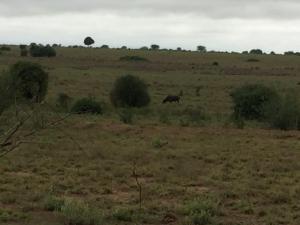 We had a stop for lunch at the Ashnil Aruba Lodge (they served Tusker beer, very appropriate).  We headed out again, and the skies opened up with a huge rainstorm so the top of the safari vehicle had to be closed and it steamed all the windows up (these vehicles are not air conditioned.) 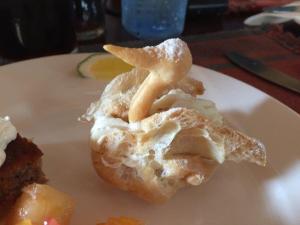 onr of the lunch desserts

Charlie with his Tusker beer

We left the park at 5 PM, and our original buses met us after the two were towed out of the mud.  We were hoping for a 2 hour trip home, but NOOOO!  Long story made shorter, it took over 7 hours.  We arrived back at the ship at 12:15 AM (and the ship was supposed to sail at 6).  Many overturned vehicles on the side, rivers of muddy water in the roads, our police escort had an accident (was run into by a truck, or lorry as they are called here) so we didn’t have him anymore.  No food or bathrooms.. and armed police (with AK 47s) outside trying to scare the truckers into some kind of order which by the way was hopeless.  We hoped they wouldn’t actually shoot anyone because then they would never move.

When we got back to the ship, much of the staff was waiting with wet cloths, sandwiches and cookies and huge hugs for us.  There were about 110 people on the 4 buses so it was a large percentage of the passengers.

So, the moral of the story is:

NEVER book your own excursion to a safari in Kenya when on a cruise.  If you get stuck, the ship will leave without you. Go on a ship excursion and they must wait.

Actually, the best idea is to fly to the safari parks.

So, that’s the end of Pat and Norm’s great adventure.  You can’t make this stuff up!!!