We had three wonderful days in the Seychelles and I will post about each of them here.  I tried yesterday but the internet was not working well enough to even pull up the site to post.

First let me say that I think the Seychelles islands are some of the most beautiful places we have seen in the world.  Spectacular rock formations, beautiful beaches, mountains, unspoiled landscapes and crystal clear blue water.

The Seychelles has set the standard for ecotourism among other island nations.  Almost fifty percent of the country has been set aside as protected land, the highest percentage of any country in the world.

We were greeted by local musicians and dancers. 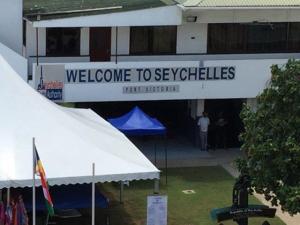 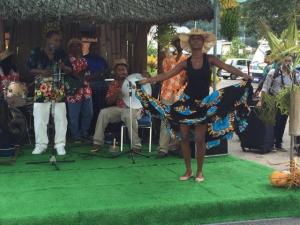 On November 12 (Thursday for us), we had a half day excursion on Mahe called Spices and Coral.  90% of the population lives on the island of Mahe, most living in the capital city of Victoria, where we docked.

In 1771, Pierre Poivre (in case you don’t recognize the name – he is the famous Peter Pepper who picked a peck of pickled peppers!) decided that the Seychelles’ Mahe island was situated at the perfect latitude for growing spices, important commodities in those times. A spice plantation was established but burned to the ground in 1780 by the French Military who feared that a British ship was approaching.  The site was dormant until 1860 when William Green, Sr extablished a new plantation.

We visited Jardin du  Roi (The King’s garden) which is an 85 acre working plantation situated high on the mountain (a very narrow one lane road takes you there).  It was a wonderful visit – we got to see the giant land tortoises, fruit bats, local birds and spices including nutmeg, vanilla, pepper and cinnamon.  We were also treated the lemongrass iced tea which was delicious.

The view is spectacular! The man is too. 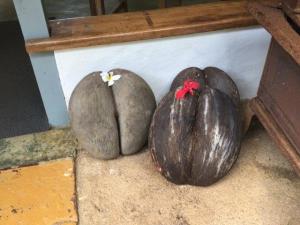 These are just some of the beautiful flowers also found here. 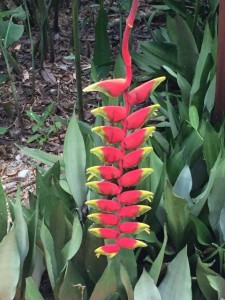 This tortoise seemed to be sleeping, then he had a big yawn!! 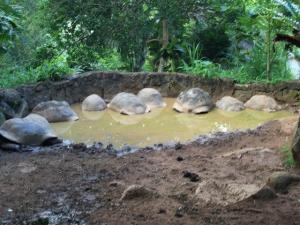 Giant tortoises in the mud pool. 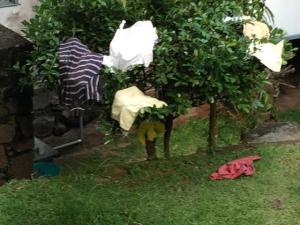 The pepper plant.  All colors of pepper come from the same plant, it just depends on how the seed is aged.

The coral part of the excursion was on a catamaran from Victoria to Anse Royal, a lovely beach.  We saw the huge residence built by Sheik Khalifa of Abu Dhabi (the same one that provided the funding for Burj Khalifa in Dubai).  Our guide said that it has everything you might want in it, theatre, ballroom, tennis courts, swimming pool, etc.  It sits on the top of the mountain with a spectacular view. 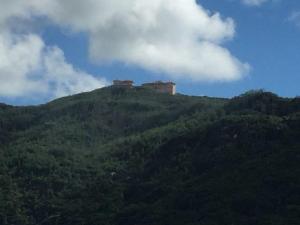 The snorkeling here was wonderful.  We have never seen so many species of fish and we loved both the catamaran cruise and the snorkeling.

Our catammaran crew, MS Insignia in the background

Most of the country is Roman Catholic and French. This little church is at Anse Royal 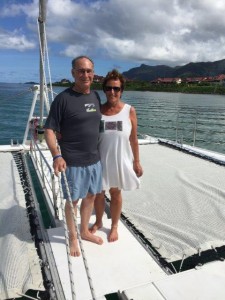 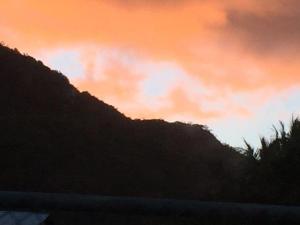 We were in Mahe overnight and had made arrangements (we thought!) with a local tour operator to go to the island of Praslin.  We went down to the dock and waited for our 8 AM guide.  When he arrived he said “you didn’t come to confirm with me – I waited until 6 pm for you yesterday”.  We didn’t get back until almost 7 frrom our spices and coral excursion and he hadn’t said anything about “confirming”.  So we decided to book a full day excursion to the Ste. Anne Marine National Park for snorkeling and a beach barbecue. We walked to the Marine Charter (about a kilometer away) for a 10 AM departure.  It turned out to be a marvelous choice.  We were with 7 other people on the boat (none from our ship) and there was a second boat with 8 people.  Our boat had a couple from Mumbai with their 4 year old daughter, Sanvi, and three people from Germany.

We started our day in a glass bottom boat where we could view the coral and fish, and the other group had a regular boat.  After snorkeling, we switched boats so both groups could have the glass bottom boat experience.  We fed the fish (mostly zebra fish were very hungry and came to the boat in huge numbers).  One of the crew dove down and brought two red starfish up for us to see.  As you can see, they had large spikes that were not sharp. We have never seen these before and they are apparently only found here.

Believe it or not, this dog was stalking and trying to catch fish. He was in the water for a long time. I don’t think he actually catches any! 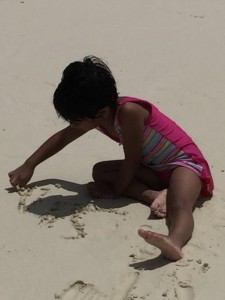 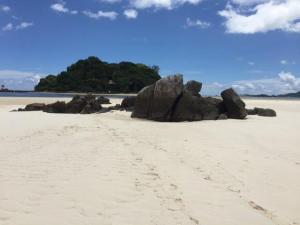 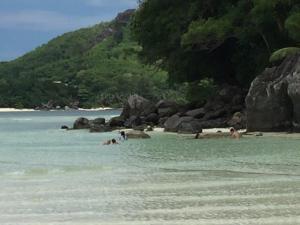 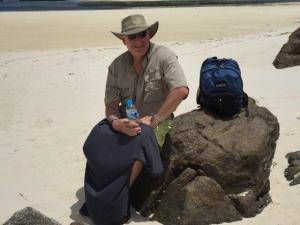 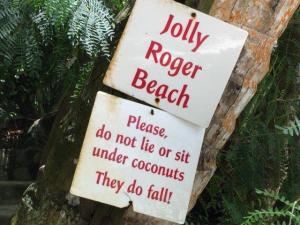 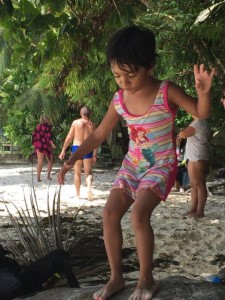 The snorkeling was beautiful. We also spent time on the beautiful beach with powdery white sand.  An unusual variety of shell was found here, pointed on one end and only the top part emerges from the sand.  They used them as razors in the past, and if you aren’t careful, you can get a severe cut on your foot from them. 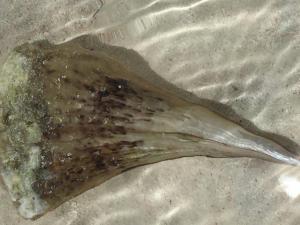 We had a barbecue on the beach and loved the grilled barracuda, also had chicken, ribs, sausage and salad. 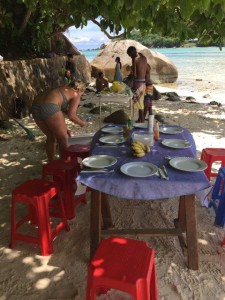 We met a young couple from Germany who was on the other boat.  They are on their honeymoon and are traveling for 3 months.  This is where they started and  is the only place they had reservations so when they heard we were on the world cruise, they asked us where they should go!

We snorkeled again in the afternoon and saw even more species – including the batfish which we have never seen before.  It was like swimming in a big aquarium – the fish were so beautiful.

Today, we left Mahe at about 6 AM and sailed to La Digue, the fourth largest of the Seychelles islands.  There are no cars allowed on this island (aside from the golf cart type that transport people from the dock to the hotels).  People travel by bicycle or oxcart.  We had to take tenders ashore because there is no ship dock here.  We booked an excursion to Coco Island and went there on a huge catamaran.  We motored out but sailed back. Again the fish were spectacular, but sadly a lot of the coral here has died, mostly because small boaters drag their anchors through it.

I really tried to use my iphone to take pictures underwater (we have a waterproof case), but I couldn’t get it to unlock – the swipe wouldn’t work – so it is a lesson for next time to unlock it before I go in.  It did stay dry though.  After fiddling for a while, I decided to give it up and just enjoy the experience. 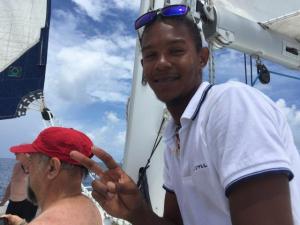 We walked through the small town after snorkeling all morning (it didn’t take long!) as it is an intimate island that is almost like you were stranded in paradise. We then headed back to the ship for lunch on the terrace.

They are serious about their smoking warnings here!

We head for continental Africa next – two days at sea and we arrive in Mombasa where we will do a safari.

** The tragic bombings in Paris took place while we were here.  The Seychelles are largely French so you can imagine the grief and sorrow.  Some of our ships crew are also French and have not heard from their families yet.

My wish is that we can find our way back to a place in this world where we don’t use violence to reach each other.