Posted on December 5, 2015 by patmathews

After our exciting seal, pelican and dolphin adventure, we had a short time to relax and get ready for our special world cruiser event – Dinner at Swakop River Canyon.

We were picked up at the pier at 6:30 by 6 passenger off road type minivans.  We rode with Marilyn and Charlie and Stephanie and Vick.  Our driver was Lawrence and we called him Lawrence of Namibia.  He is a psychologist who is now semi retired and does this tourism job to keep busy.  He was fun!

It took about 1 1/2 hours to drive to the canyon past the large sand dunes in the Namib desert (more about that later).  The Canyon has been likened to a moonscape with its unusual rock formations and dry riverbeds seared into the landscape by the glaring sun. Sunset is the most stunning time of day to visit the canyon as the fading light casts dramatic shadows across the stark environment.

When we arrived, the sky was pink and the rock formations were studded with hundreds of luminaries – so beautiful!  There were drummers and dancers and even camels to greet us and many small fire pits.  The wine flowed freely and we had time to explore the beautiful table settings before dinner. 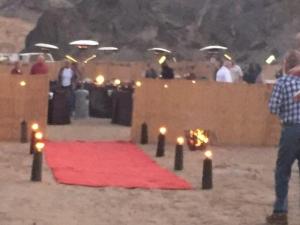 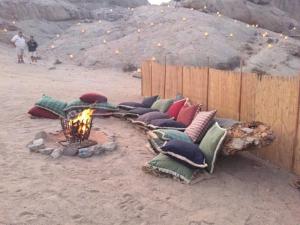 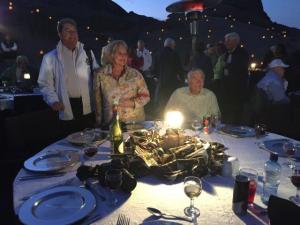 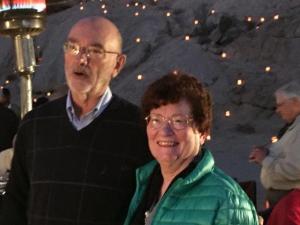 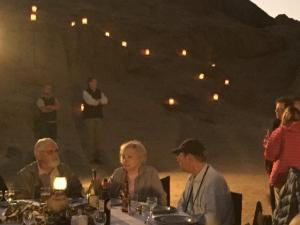 For dinner, we had a buffet with everything from asparagus that is grown on desert farms here, to grilled garlic and peri peri prawns.  There were 4 different types of salads, West African Chicken and Peanut stew, Oxtail Lesotho Style, Namibian Venison Kebabs, Herbed Linefish Fillet, Egyptian Koshari with Salsa, Marrow, Peppers and Corn, Gratinated Potato and Butternut Bake, fresh (wonderful) bread with Sherry Trifle, Fresh Fruit Salad, Chocolate Mousse and Bread and Butter Pudding with Vanilla Sauce.  Needless to say, no one went hungry!  Our table for 10 included Candace and Rodney and the other Marilyn with her husband, Don as well as the 6 of us who traveled in together.  We had a great time.  We were entertained by singers and torch dancers and some of us even joined in the dancing (without the torches).  I know that my photos won’t do it justice but the scene was just magical.  When you ventured a bit away from the tables, the night sky was spectacular.

Beautiful evening.  We arrived back at the ship after 11 and needed to be up at 6 for our next adventure!

We left bright and early for our tour, Treasures of the Namib Desert by Off-Road Vehicle. We weren’t the only ones up early, our drivers/guides for the 5 vehcles were some of the same ones that took us to the dinner last night!  We had Oliver, but Lawrence was also in one of the other vehicles.  Today, we only had 4 people/vehicle and we were with Mary Ellen and Michael from Phoenix who are also on the world cruise with us.

Walvis Bay has 85,000 residents and is really growing.  If there is much poverty here, we didn’t see it.  We did see lots of small homes that people can buy for $25,000 US and Oliver said that they are trying hard to have people move into those.  There are also lots of huge homes, mostly along the waterfront. There is a log of uranium mining here and you see a large pipeline that brings water to the mines. (Yesterday Lawrence told us it was bringing German beer to the brothels – a little tour guide humor).

We traveled a different route than last night but our destination was more of the moonscape looking canyons in the Namib-Naukluft Park. We were driving in the Swakop River Valley  with the huge rock formations all around us.  This is the oldest desert in the world, from when the earth was formed, about 55 million years ago.  It also has the world’s highest shifting sand dunes.

One of our guides 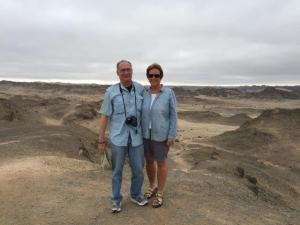 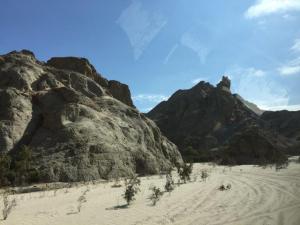 We stopped to see the landscape in several places, then made a stop to see and learn about lichen which is a combination of algae and fungus.  We saw the lichen on rocks that they put in a circle for demonstration (you will kill it if you climb on it on the hills).  It looks dark, another variety red.  When our guide poured water on it, it turned green! Amazing to watch.

Later we saw the  Welwitschia mirabilis; a shrub-like plant, it grows two long strap-shaped leaves continuously throughout its lifetime. These leaves may be several meters long, gnarled and twisted from the desert winds. Two of the ones (male and female) we saw were determined by botanists to be about 500 years old. They are endemic to the Namib Desert.

After the drive and a few more stops in “moon valley” as it is called, we had a stop  at this “oasis” for mimosas and snacks and, of course, rest rooms.

These are the drawings to let you know men from ladies’ rooms, luckily they were modern and we didn’t need the bushes!

We then went on to the famous sand dunes – and had a stop at Dune 7.  Some of the dunes are about 980 feet high and 20 miles long. Amazing to move through the desert and see the rocks which consist of many types including quartz and volcanic, and then the sand dunes all surrounded by the flat, sandy desert with its low shrubs. In the river valley there are also occasional strips of green trees which get their water from underground sources.

These pictures are mostly to show you the scale.. how high those dunes actually are! 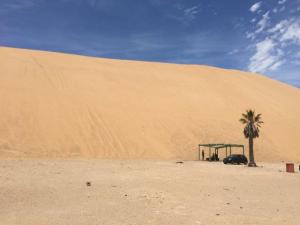 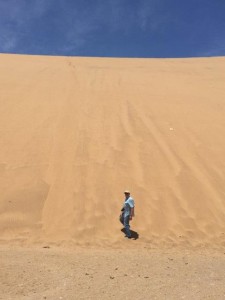 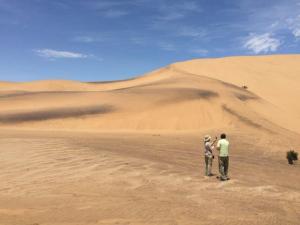 While the air was cool, the sand was hot and we didn’t have the time to climb to the top. They had a sign that said “no sandboarding” although we know that it has been done in the past.

After the dunes, our last stop was at the lagoon in Walvis Bay where several thousand flamingos stay most of the year. It is the largest habitat for flamingos in the world. They leave and fly to Etosha in northwest Namibia to breed and it is thought that is because the water is more shallow there and also warmer.  Then they return here to the lagoon. The greater flamingo is more white while the lesser flamingo is more pink.  I love to see them fly because of the colorful wings.

A great evening and day.  In the afternoon we have a face to face inspection, hand in our passports and then have 2 days at sea on our way to Luanda, Angola.  On Monday we have another special dinner in Polo for the world cruise travelers.  And, by the way, we are on day 151 which means less than 30 days to go.  Hard to believe and it will be hard to leave!