We took the shuttle bus into town today.  Dakar is the capital of Senegal and is the western most city in the Old World and on the African mainland.  We actually changed planes here when we came for our safari in 2011. It is a big port and the city has many French expatriates and in fact most local people also speak French. The country was under French rule for 3 centuries.  This is another poor country as are most of the West African countries.

We left the bus at Independence Square and visited the Kermal Market which sells mostly Muslim garb and lots of souvenir type merchandise.  We walked past the President’s Palace where we saw lots of armed guards and weren’t allowed to take pictures. 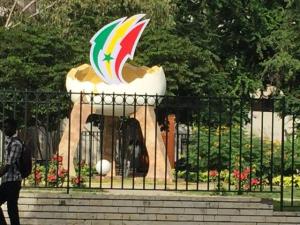 In a garden across from the Presidential Palace 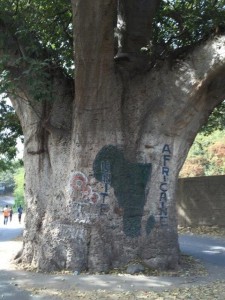 BIG bird nest in this tree, loved watching them

almost up this long staircase near the Palace

Our main stop today was at the Institut Francais, which is a garden with lots of trees.  Our unexpected surprise was that there was a local craft exhibit and sale set up there.  We bought some gifts and several pieces of jewelry that I fell in love with! They wanted either local currency or euros and we only had dollars with us.  I do have a currency converter on my iPhone, so we knew the exchange rate.  After they thoroughly checked out our money, and with my high school French, we were able to pay for our purchases.  The women there had never seen American money. Guess they don’t deal with too many tourists. The items are all locally made and not from China as so much of the street vendor merchandise is. 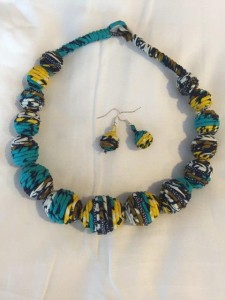 There were also vendors set up outside the ship on the pier, here is Norm’s giraffe shirt.  When we got back on the ship, we probably could have charged for the info about where he got it, many people went out to buy one of these batik t-shirts!

We had lunch today with Andy, our cruise director, and Tammy, his wife and the social hostess on board.  They have lots of extra things to do on this leg of the cruise due to the Christmas holidays and all of the events going on, both for crew and for guests.  So we are looking forward to all that is yet to come.  We made plans with friends Marilyn and Charlie for Christmas dinner. The ship is even doing a midnight service on Christmas eve.  I will post about all of the events as they unfold.  No one wants to give too much information away ahead of time. They have one channel on the TV showing all the Christmas movies, and they also have one with that fireplace always on (that we can see at home!)

One thing they are doing is having an auction to benefit the crew fund.  You can bid on dinner with one of the senior staff, and many other things.  Guests can donate to this auction, and they recommend seeing if you bought something you now don’t want to bring home!  This auction will be on Christmas Day.

I also don’t think I posted about the ship’s doctor who sponsors 2 orphanages in Africa. We donated items that a crew team brought to the orphanage.  You get a new appreciation for what you have when you visit these countries.

It is so different to be on the ship for 6 months, it is really like a small village with all the characters you might expect.  And we really get to know the crew very well.  One of our favorite head waiters has a new baby boy that he will be seeing soon.  We bought a gift for his new son.  We also buy Portuguese pastries whenever we see them in port –  for another favorite head waiter who is from Portugal and he misses these pastries.

One more port in West Africa, Cape Verde.  We arrive there on Monday.