Day 167.  I usually don’t refer to the “day” of the 180 day adventure, but sadly, we are winding down, less than 2 weeks left.  Funny, in the past I have thought a 2 week vacation was long!  But this feels like home and it will be sad to leave.

First, I want to post a picture sent to me by a fellow cruiser.  This is one where the children at the school in Gambia were delightedly looking at their pictures on my iphone. 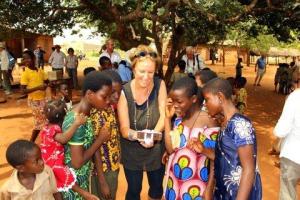 Another funny story – one of the women on this excursion saw me using the selfie stick (which I used mostly NOT for selfies, but it was convenient to hold the iphone that way). She thought I must have been very vain, taking all those selfies.  As I was taking a picture at lunch, she asked me about it and told me what she thought.  She never had an iphone or a selfie stick so was then quite interested!

We have had 2 evenings of really great entertainment on board.  Mike Sterling was the first one – he is a singer that has performed in London’s West End – over 1000 performances as the Phantom in Phantom of the Opera and also as Valjean in Les Miserables. What a wonderful performance.

Last night we had a group called 4ever, a group that is like Il Divo.  Two of the men are from Spain, one from Italy and one from Uruguay. They were just spectacular.  Luckily we will hear both again before they leave the ship in Barbados.

Tonight they are showing the movie “White Christmas” and there are lots of other Christmas celebrations coming up.

Well, I entered my first ever Texas hold ’em tournament.  I watched a few and was encouraged by all the men to enter (you read that right, no women have entered).  So I lost in the very first round.  I had a Queen high flush and another guy kept betting, so I stayed in and it took all my chips.  Turned out he had an ace high flush.  Will I enter again?  We’ll see!  In both blackjack and poker tournaments, you just pay the $35 entry fee so that’s all the money that is at risk.  I don’t know that I’d play using real money vs just the entry fee!

So now on to Cape Verde.  It was a delightful surprise.  The town of Mindelo was about a one mile walk from the pier, so we walked to town and explored. The official language here is Portuguese and there are also 2 Creole dialects and so far citizens have not come to a consensus on which should predominate.

Here’s how we were greeted! 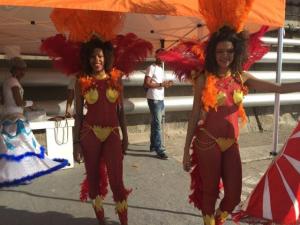 Water is a real problem here on the island.  In fact after the island was discovered in 1462, it remained practically uninhabited and was used only as a cattle pasture due to the lack of water.  Now their economy is based on commerce and services not agriculture due to the same issues. This is a volcanic island with some high points. The climate here is really beautiful, average 74 degrees all year round.  It felt breezy and wonderful today. 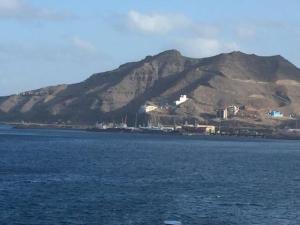 First we visited the Mercado de Paixe, the local fish market, near Praia de Bote where the boats come in.  You don’t see a lot of tourists here, but you do see the fishermen bring their catch to market, and lots of different fish for sale.  It was the cleanest fish market we have seen on our trip. And yes, Mario bought fresh tuna for dinner.

Next we went to the Praca Estrela marketplace where the West African merchants display wares ranging from handmade crafts to fine jewelry. And just across the street, the colorful fruit and vegetable market is a busy place. We met a man whose brother lives in Brooklyn and he gave us each a necklace with the shell they consider to be good luck – which he had made.  We bought a coconut shell necklace from him. 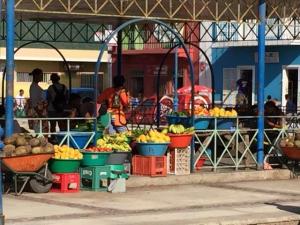 We saw the Governor’s Palace and loved the cobblestone streets, colonial buildings, cafes, etc.  The people were friendly and didn’t follow us around like in Senegal. Some vendors would take American dollars but it took a bit of convincing. They like euros or their local Cape Verde Escudo. Luckily I have my iphone currency converter which showed that one dollar is about 101 of their dollars.

For my yaya friends! 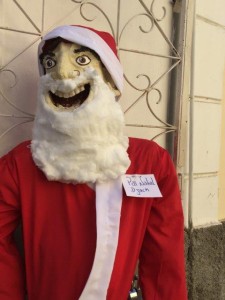 Their idea of Santa? 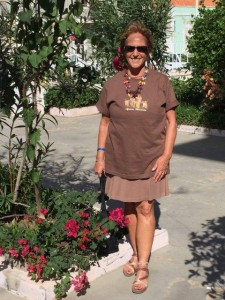 In the garden outside the Governor’s Palace 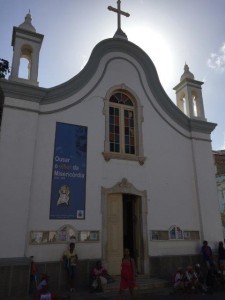 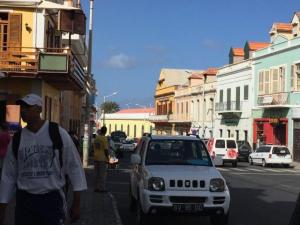 Before heading back to the ship, we stopped to listen to a concert that was being held the central square. Then we had a refreshment break at a cafe where Norm had a very strong coffee. They like it strong here. Oh, and they had free wifi so there were a lot of crew members there too.  All in all, a very pleasant way to leave Africa.