Ok, first thing to say today is that I can’t get my pictures to download.  This is due to the slow and spotty internet connection right now and I will post them when I can get them to download.

Today we did a walking tour of historic Cartagena. We started off by meeting our guide, Victor Menendez.  He gave us nametags to wear that said “vicmen” so he could keep track of us.  He said it was shorter then Victor Menendez! He repeatedly expressed his appreciation on behalf of his country that we chose to visit. He said that they are honored to have us here.

Cartagena is a city on the northern coast of Colombia. Its colonial walled city and fortress were named a World Heritage Site by UNESCO in 1984.

First we saw the Castillo de San Felipe de Barajas, the greatest fortress ever built by the Spaniards in their colonies and the largest in the Americas.  It was finished  in 1639 and took 30 years to build.  It sits high on top of San Lazaro hill. The fortress was never penetrated and it has a system of tunnels that were constructed in such a way that the footsteps of an approaching enemy could be heard. The Spanish were very smart in their ideas to protect the city. There are 23 forts and the city is protected by walls.  The walls are of different heights depending on the area they are protecting.  At the area of the sea, the walls are quite low since the water was too shallow for boats to land.  Now, they wish they were higher as the sea level rises and parts of the town flood.

Many vendors tried to sell us hats, jewelry, etc, and there were many brightly dressed women with pans of fruit balanced on their heads.  They, of course wanted you to take their pictures for $1.  American money is widely accepted here. 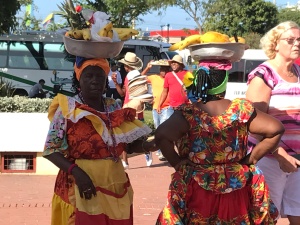 We went inside the walled city and walked through beautiful streets with homes that had lovely balconies.  In this area of the old town, Victor told us that these homes can sell for up to $10 million US dollars! We saw the cathedral and the Governors building which used to be the headquarters of the Spanish government. We also saw the statue of Simon Bolivar in the park and the statue of Columbus in another square. 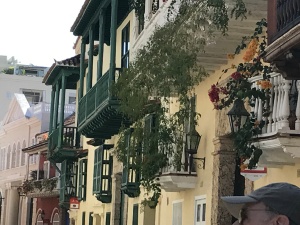 Not a bad place to live if you have 10 million dollars! 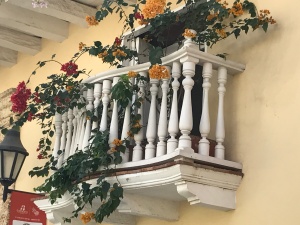 The visit to the Inquisition Palace was definitely  an eye opener.  The inquisition, which lasted over 200 years, was an effort by the Catholics to get rid of any non believers, especially those who were thought to be witches – also Jews. We learned about the various methods of torture, as the intent was slow death.  The number of deaths is listed as very small but there were many that they called “accidents” and not deaths due to the torture.  I took pictures of some of the instruments of torture and shuddered when Victor explained them.

I wouldn’t want this around MY neck….

I was looking for a type of fabric that consists of many pieces down carefully together, apparently a dying art here, and just before we had to go back to our ship, I did find two pieces.  Not the blouse I was looking for, but very nice.

The ship left for the Panama Canal at 2 PM so we had a relatively short day in Cartagena.  We were told about potential theft but we did not encounter any problems and never saw any drug peddlers either!

Tonight we got an invitation to have dinner with Victor Conceicao, the general manager on board.  We know him from our previous cruise and really enjoy spending time with him, so we are looking forward to it.

Tomorrow we will be going through the Panama Canal, and we have learned a lot about it from the enrichment lectures.  It will be our second time through the canal, the first was almost 20 years ago so we are looking forward to it.  Hope I can get some good shots and can post them!

This entry was posted in Excursions, January, South America. Bookmark the permalink.