Just in case anyone is counting, this is day 41 of our 180 day around the world adventure and it has been a wonderful journey so far.

Today we spent the day in Vanuatu specifically in the capital and largest city, Port Vila. They call this area of the world Melanesia. In the 19th century, French settlers established the municipality of Franceville which declared independence in 1889 and became the first self-governing nation to practice universal sufferage without the distinction of sex or race. One of the elected presidents was a US citizen by birth, R.D. Polk. 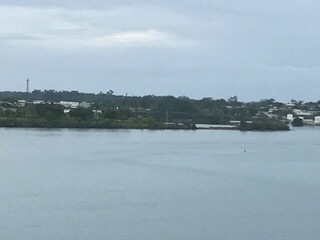 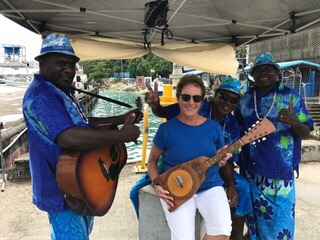 The view from the ship was of a green island with white beaches.  Of course the port is a container port as well.  This small band greeted us and wanted me to play the ukelele with them.  Alas, I have no talent for that!

We again had good luck with the weather.  We had a lot of rain last night but the day was cloudy and sunny off and on but no rain.  They did cancel the snorkel tours because of strong winds in that area.  We hadn’t planned on snorkeling today, so it didn’t affect our plans.

We met with the local representative, got a map and directions and headed out for a 3 mile walk to the town.  It was very hot but we made it.  Did some local shopping, stopped for a drink and wifi (not very fast), then headed back to the ship for lunch.  We visited the markets which we always love – both the fruit and vegetable markets and the handicraft markets.  I did get my local magnet and also some black soap – volcanic – which is recommended for exfoliation (and I have some type of allergic reaction on my face so I thought I would try it.)

On our walk we passed an area of construction – a new port area.  We noted with interest that it is a collaborative project with Japan and both flags are on the sign outside the area.  It looks like it will be a good sized port and perhaps will increase tourism.   Right now most of their tourists are from Australia and New Zealand and most cruise lines don’t make this a port of call.

Pigs are revered here and you see all manner of carved pigs in the markets. We also noticed several of these art paintings on the exterior walls of the shops.  Australian money is accepted here but many places do not take American dollars.  So we had the first use of our Australian currency.

The people here are very friendly.  Many of the bus and taxi operators approach you to ask you to not buy tours through the ship but to support them directly.  We had many offers for rides, some for free, and they seemed quite shocked that we actually wanted to walk.  We were pretty hot when we got back!

A lovely spot for a rest outside the handicraft market.

One of the things we enjoy on the ship is the string quartet.  This is the Four Seasons string quartet, the second group we have had on board.  They play in the upper hall every night for 3 different sessions.  Last night in the main showroom we saw Linda Gentille on the piano – she was really great.  It turns out that she is the conductor of the Jersey Shore Pops Orchestra in Cape May, NJ.  Who knew! She will be on board for one more show in a couple of days and we hope to get the chance to speak with her and to look forward to going to the pops this summer. She has performed over 1000 concerts worldwide in over 30 countries and has spent the past 16 years touring China.  She is fluent in many languages including Mandarin. 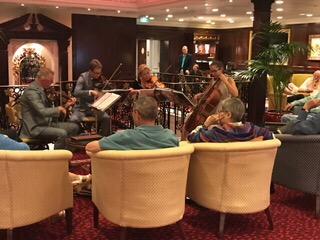 We had lunch today with one of the around the world passengers who is traveling alone, Bridget.  I asked her where her home is, and she replied “here”.  The story is that she has left her possessions with her daughter and does not know where she will make her home when the ship returns to Miami.  She is about our age and has backpacked in Australia and New Zealand, staying in hostels along the way – for 2 months.  Very interesting.  She told us that her husband passed away 27 years ago and she never re-married.

We have met the most fascinating new friends! Last evening we were invited to dinner with Tricia and Steve, the Around the World host and hostess along with two other couples.  As I have mentioned before, they are from the UK and we all had a lively discussion about the pubs in Ireland – with a promise from them to take us to some of their favorites.  It’s still a long way away, but something to look forward to for sure.

Tomorrow we are at sea and on Saturday we will visit Noumea, New Caledonia where we are planning a snorkel excursion.  Hope the weather is good for that one.

This entry was posted in February, World Cruise 2. Bookmark the permalink.