We were advised by our cruise director, Leslie, that we would greet Sydney with the “white jacket/white robe breakfast”.  The Around the World passengers received white jackets so we chose to wear those to breakfast and then up on deck to sail into the beautiful Sydney Harbor. 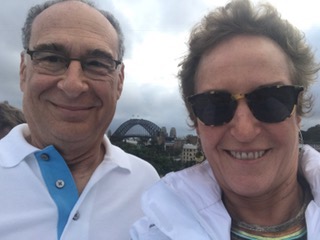 The entertainment team all had their robes on and of course, Erica of the beautiful shoes had another stunning pair of high heels on with her robe! 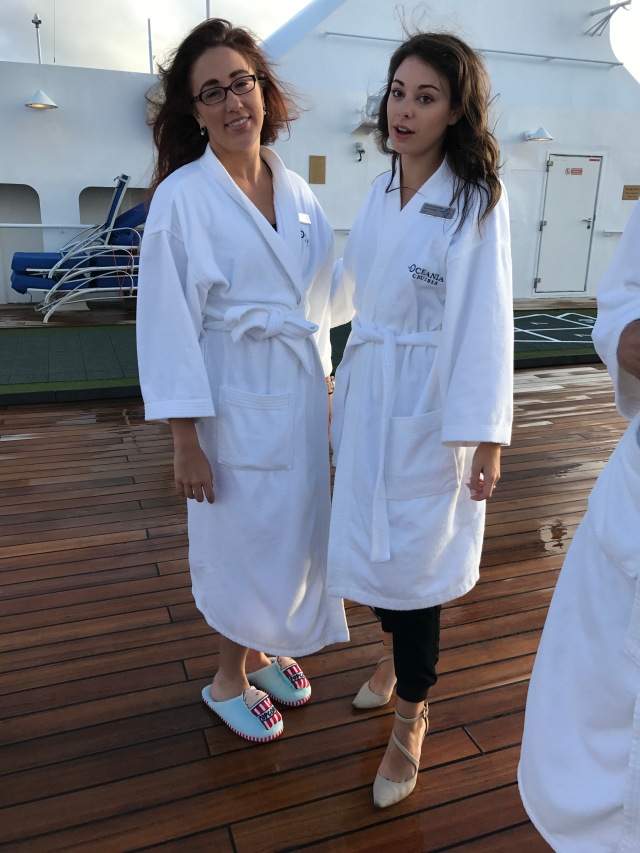 We have been to Sydney 8 years ago and had explored much of the city, but we have never sailed in. It is truly one of the most beautiful harbors in the world with the famous Opera House and the harbor bridge greeting you as you glide by. 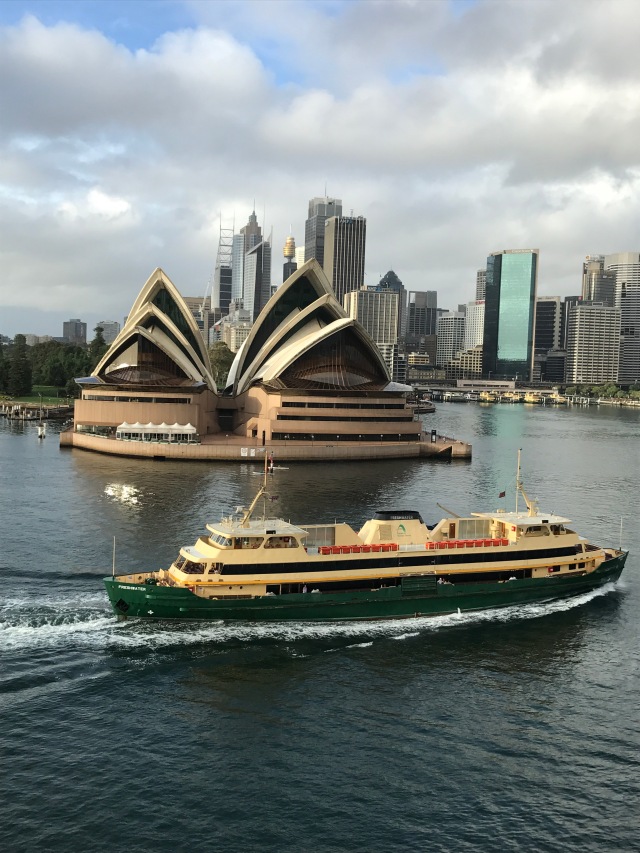 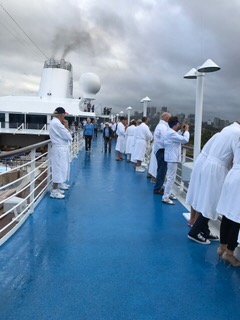 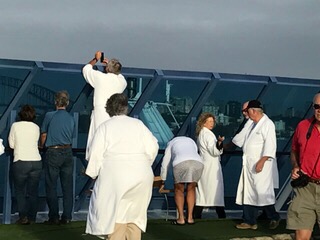 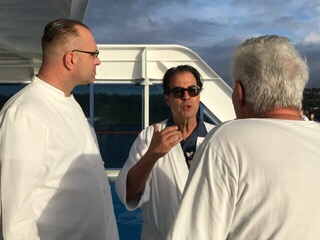 Jorg, our executive chef and Leslie, our cruise director, talking with a passenger 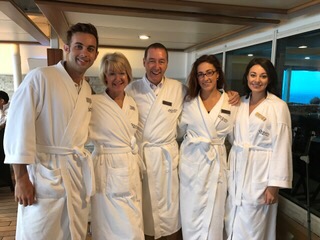 Sean, Tricia, Steve, Alexis and Erica in their robes 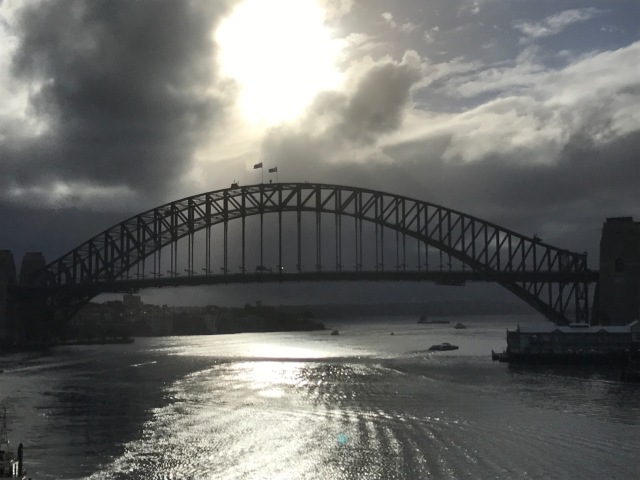 We had a big downpour just before arriving in the harbor, then the weather cleared enough to be out on deck and take our pictures.  The weather throughout the day was misty with glimpses of sun, and we did have a couple of downpours,  but we were able to be out and walking around the city all day in spite of that.

We were berthed at White Bay which is a bit of a distance from the center of town but for us it did not matter as we were being met by Rodney and Candace, friends we met on our last world cruise. They live in Sydney and we were so happy to spend the day with them.

There were a lot of road closures announced because of the big Gay Mardi Gras parade which is a big annual event here. They are expecting 300,000 people! We were lucky to be with local people who knew how to get around! 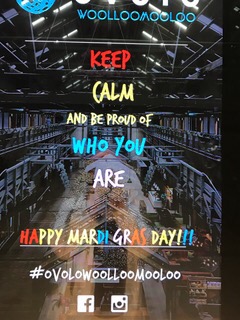 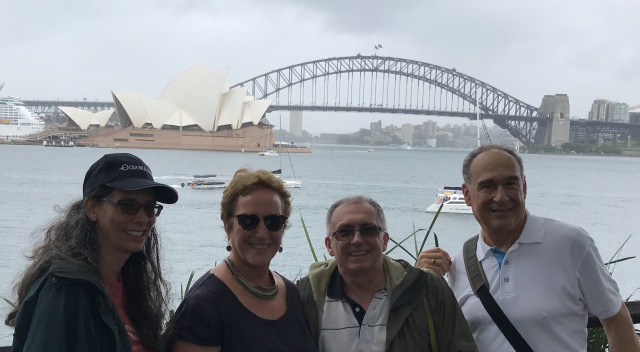 Our first stop was the Sydney Opera House which we saw on our last trip but never toured. Rodney and Candace dropped us off and we enjoyed the one hour tour. It is pretty spectacular inside and out and the guide was great. You are only allowed to take pictures in the theaters when there is nothing going on. He didn’t tell us that until I had already taken pictures in the Joan Sutherland theater (used primarily for operas and ballets). They were setting up the set in there for Tosca. There can be 18 performances of one kind or another every day in the Opera House. It is a UNESCO World Heritage site and one of the busiest performance venues in the world.  Our guide says that the most interesting is the “Festival of Dangerous Ideas”! The main theatre has space for a 600 voice choir and seats only 2679. The rings you see are not lights, but acoustic rings.  This venue is where the Sydney Symphony performs. 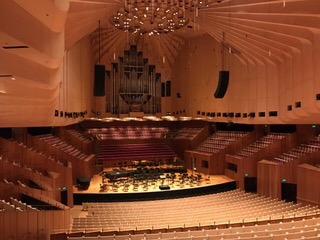 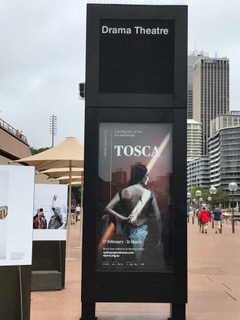 The Opera House opened in 1973 and was initially very unpopular with the people of Sydney.  The architect estimated that the cost would be $7 million but the cost ended up to be $102 million.  Now it is a symbol of pride for sure.  They are about to embark on a 1.1 billion dollar renovation.

After our Opera House visit (and by the way they have FAST wi-fi there), we went to the Royal Botanic Gardens, which is a vast and beautiful 70 acre park.  We saw beautiful displays, birds, and on our way out of the Gardens, we spotted this possum peeking out of a tree! 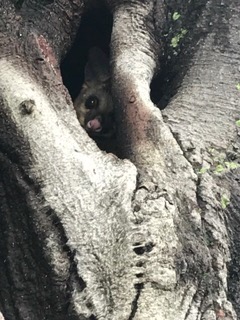 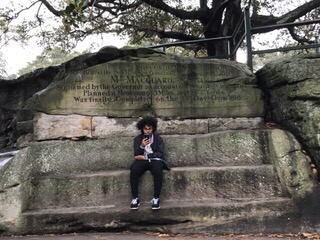 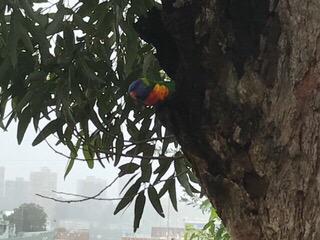 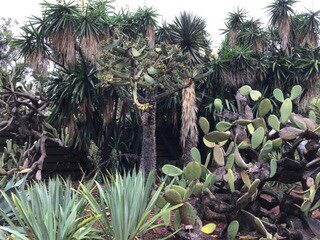 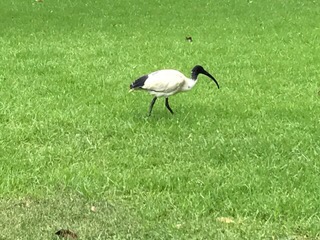 We walked through the Woolloomooloo neighborhood where there is a sculpture display (Norm can never resist interacting with a sculpture), then had lunch at a local pub where Rodney introduced Norm to meat pies, a specialty here. 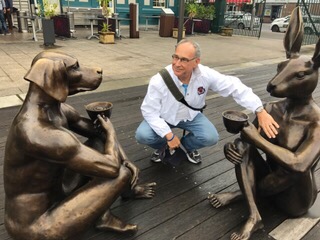 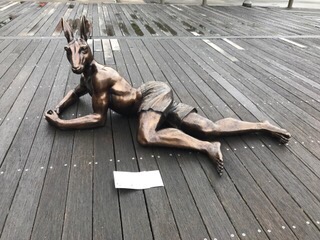 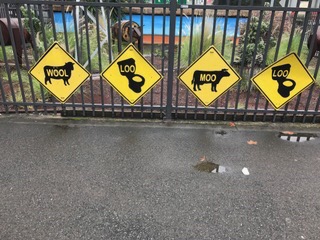 here’s how to pronounce the name of the area!

After our lunch we walked up to Rodney and Candace’s apartment where we had the most beautiful view of the city from both of their balconies.  Candace took pictures of our ship as it was arriving this morning, and how about this one of the bird that landed on the balcony!  Ship in the background.  Thanks for sharing these, Candace!  We took advantage of their very fast wifi to update our devices and were introduced to the famous Australian Tim-Tams, a wonderful cookie that we then purchased on the way back to the ship as gifts for our butler and stateroom attendants. 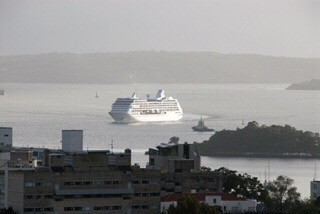 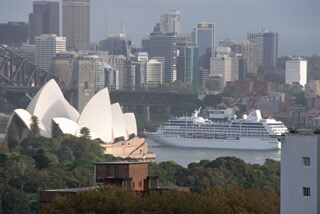 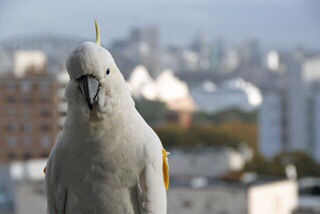 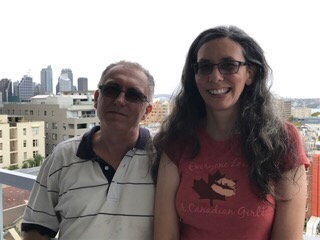 We finished our day with a walk to the Sydney Harbor National Park – Gap Bluff.  We stood on the bluffs that we saw as we sailed into the harbor. 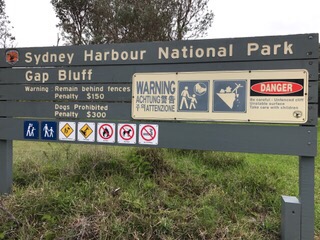 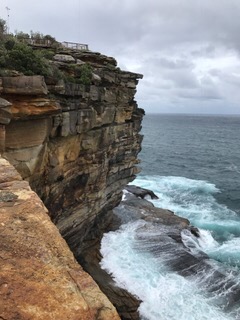 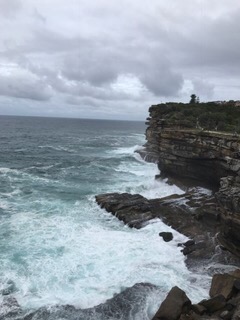 A wonderful day with friends and an exploration of the city that we never would have seen on our own. And the sail out in the dark was beautiful too! 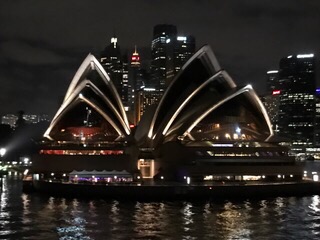 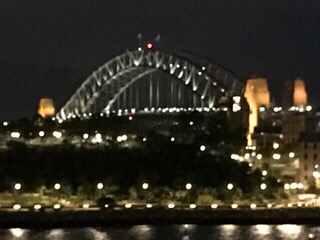 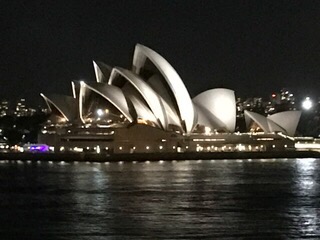 This entry was posted in Australia, March, World Cruise 2. Bookmark the permalink.