Our tour of Darwin today is scheduled for 12:15, so we enjoyed a nice breakfast at the hotel – late.  They also had one of the juicers with lots of fresh fruits and vegetables available to make your own.  I guess it might be an Australian thing.

Our driver, Ray, picked us up in another one of those big truck/buses.  We only had about 15 people with us and most of them were Greek, so the language in the bus escaped us most of the time.  Some of them spoke English at least a bit though, and one couple had moved to Melbourne.

Darwin, as it turns out, has a harbor that is twice the size of Sydney’s which was a surprise to us.  It is a totally different city from Sydney, though, only 87,000 population although people of 70 nationalities live here. It is Australia’s only tropical capital city.  We didn’t go to the commercial port but Ray told us it is constantly being enlarged and improved.  Interestingly there are 4 marinas that have locks, one for commercial fishing boats and the other three in private marinas.  This is because the tides are so dramatic here.

There is lots of water and many beaches but no one swims at them.  Ray says maybe some tourists who don’t know any better might.  Why?. Crocodiles and deadly jellyfish.  In fact, Australia has more dangerous species of animals, reptiles, insects, etc.  than anywhere in the world. 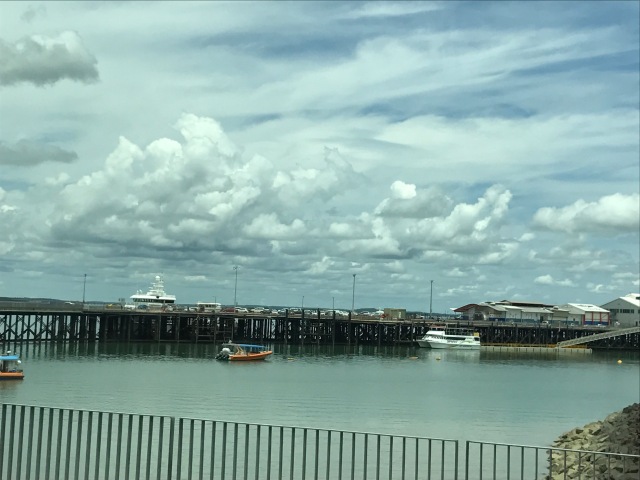 We first had a drive around some of the waterfront parts of town.  These unique benches started out as gun look alikes to deter the Japanese from coming on land.  They never did come on the land, so they kept them there and now they are growing plants over benches that have been placed looking out on the water. 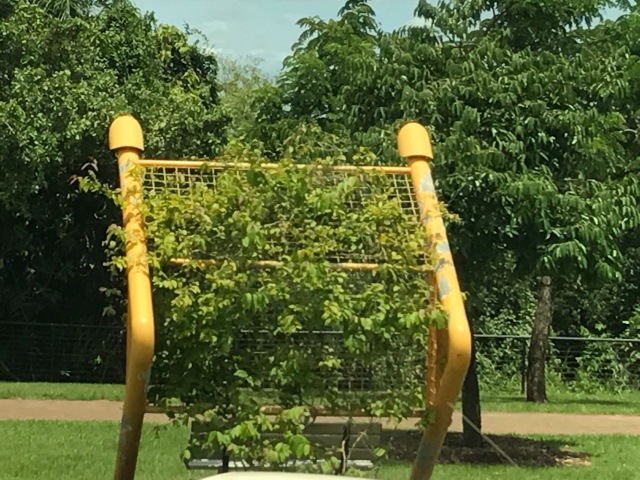 Some history Norm and I certainly never learned is that just 10 weeks after the Japanese bombed Pearl Harbor, they also attacked Darwin – on the 19th of February, 1942.  There were a total of 64 air raids on the city.  It is said that it is the battle Australia tries to forget.  Although there was much to be proud of that day, the dark side of the story lingers – looting, desertion and a failure of Australian leadership.

The difference between the attacks on Pearl Harbor and Darwin is startling – the Japanese dropped more bombs on Darwin, killed more civilians in Darwin and sank more ships in Darwin than in Pearl Harbor.  It remains the single deadliest event in Australia, yet it remains mostly unspoken about.

We saw the first telegraph pole which became functional in 1872 and represented the first communication between Australia and the rest of the world.  Before that, a letter could take 4 – 6 months to arrive.

We passed St. Mary’s Church which has a black madonna, and it was said by the church that their tradition demands that it faces the water.  The church required special arches in another building before they would approve its application so that they could still have the water view.

Here are some of the other interesting buildings in the city.  The one shaped like an elongated egg is to make it able to withstand cyclones – that winds would go around it so that it would be less stressed.  They had a very severe cyclone in 1974. 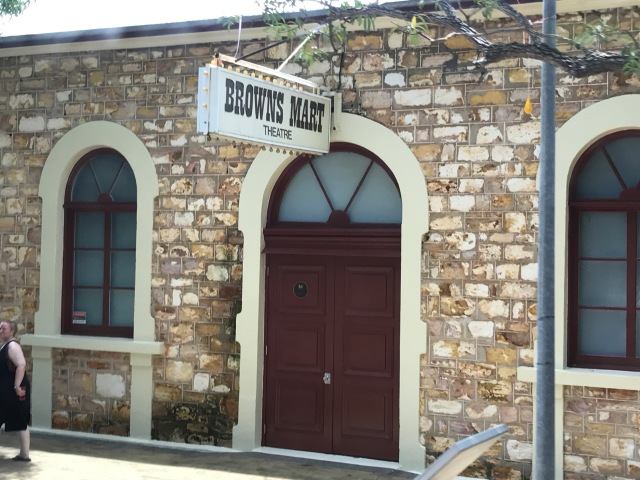 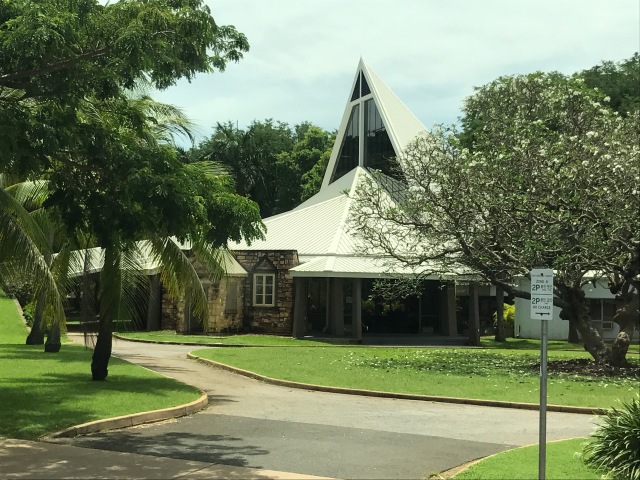 We drove out to the Charles Darwin National Park and had a walk around.  Since I didn’t get a picture of the magpie goose yesterday, here is a picture! 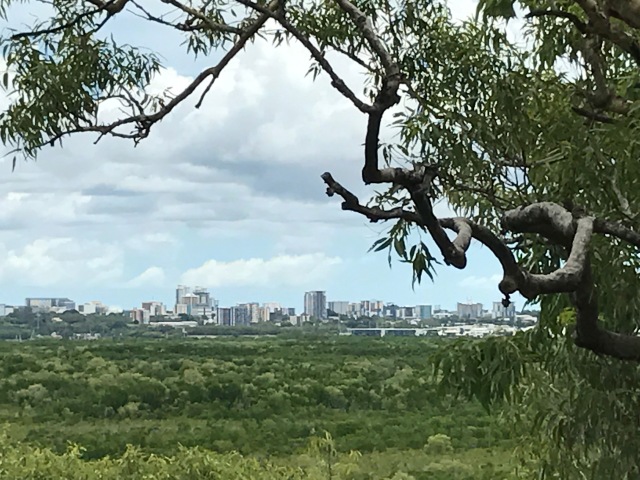 The view of Darwin from the park is very nice, and you can also see the huge mangrove forests. There are 40 different kinds here.

Next we visited the Darwin Aviation Museum which is just large enough to contain a B-52 – the plane and its wings fills the entire building and the other smaller planes and exhibits fit underneath it.  This is mostly a WWII museum with lots of stories about the war.  The Japanese bombed Darwin to assure that Australia would not enter the war, and they did not, but they suffered casualties anyway. 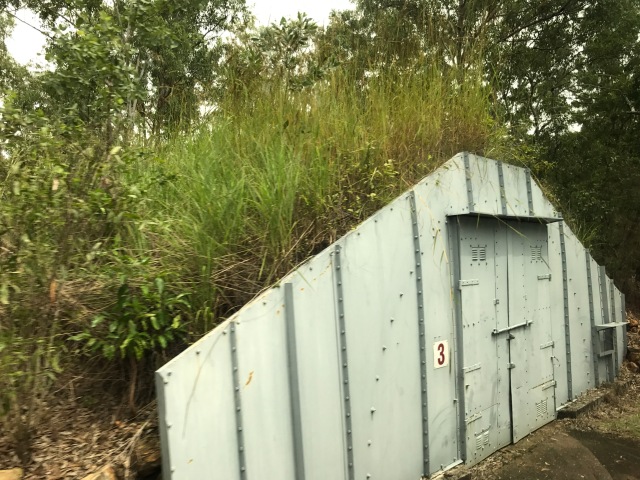 These bunkers we passed were covered with vegetation which made them invisible to the attack planes during the war.

We visited the Museum and Art Gallery of the Northern Territory – really enjoyed the art.  They have a Country and Western section which has a whole different meaning here – Country is Aboriginal and Western is the white population.  Here are two of the Country pieces. I am really intrigued by the Indigenous art and bought a necklace in the gift shop. 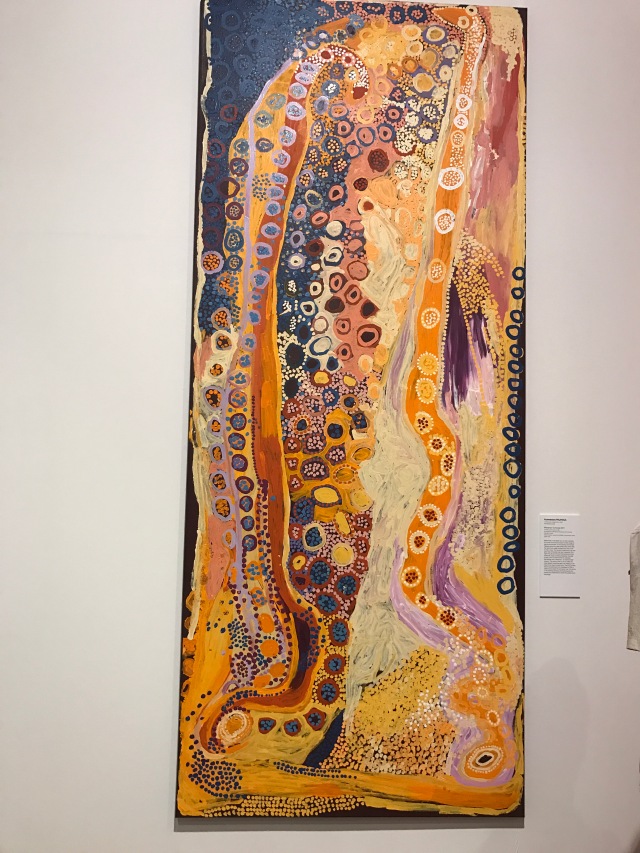 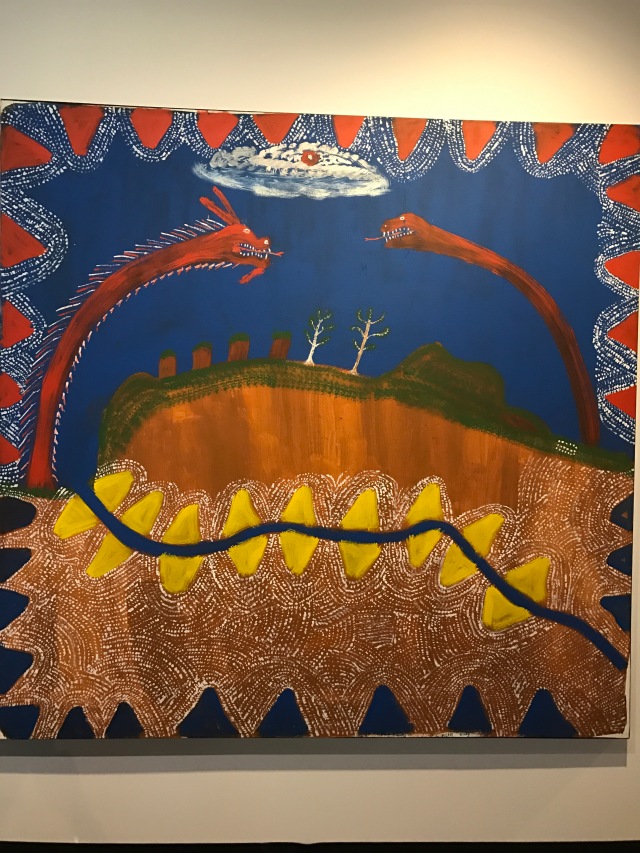 There are many other exhibits of shells, wildlife, the 1974 cyclone and one of the highlights is the presence of “Sweetheart”, a crocodile that was known for attacking aluminum boats.  They attempted to remove him to a sanctuary but unfortunately he died and he now “rests in peace” in the museum.

I never want to see one up close and personal!

Our last stop of the day was the George Brown Botanical Gardens, renamed for the man who gave so much of his life to rehabilitating the Gardens when they were devastated by the cyclone.  It was beautiful and peaceful.  They have these benches made of trees in all of the parks we have visited. 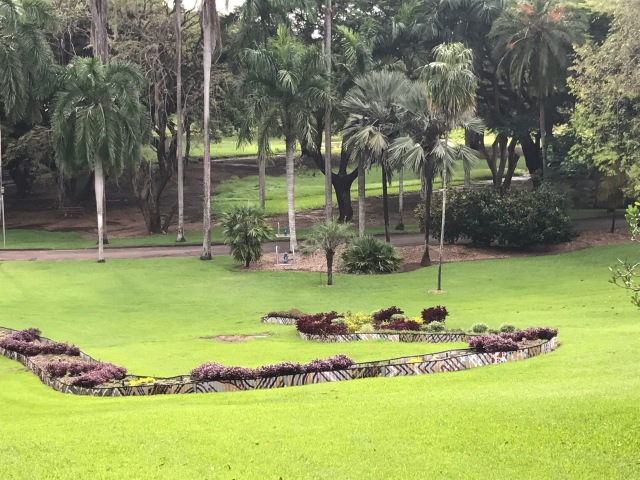 There is a dramatic difference in everything between the wet and dry seasons.  As I mentioned, this is the wet season – the dry is June – October.  Operating hours of attractions, excursions available, restaurant hours and much more – Ray mentioned so many times that things are available only in the dry season.  Of course our flight in Kakadu is only in the wet season!

Very interesting day – Ray was a good guide and showed us many other things in Darwin – I tried to cover just some of it here. It was about 100 degrees and humid, so we were really glad we did this option vs the hop on hop off bus which would have been a scorcher.  Lots of lightning in the sky later in the day but no rain.

We ate at a restaurant in the Waterfront, got gelato on our walk back to the hotel and now I am doing my last “easy and fast” blog post.  Tomorrow in the late morning we will check out and go back to the ship.  Once we get organized we may venture out again as the ship won’t sail for Komodo Island until about 6 PM.  Or we might just stay on board and relax.  It has been a wonderful, educational week.  Soon we will say goodbye to Australia – who knows if we will be back so we were glad to see some of the outback and the National Parks.

This entry was posted in Australia, Excursions, March, World Cruise 2. Bookmark the permalink.