We have a guest chef on board, Christian Delouvier who is French, the same nationality as our Executive Chef, Farid.  They did a cooking demonsstration of Christian’s favorite dishes – these are some that I will definitely make at home.

The evening before our port in Myanmar we had a special dinner for the ATW passengers.  Each table in Polo and Toscana was made up for 9 or 10 people, 8 passengers and a crew member or two.  We were hosted by Mariusz Lewandowski from Poland, the food and beverage manager.  We had a delicious dinner and terrific conversation.  Needless to say, the wine flowed! 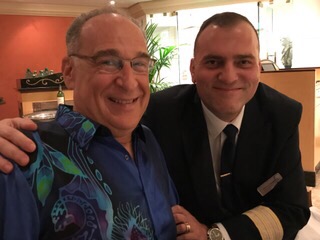 On our first day in Myanmar, we stayed on the ship as we had been to Yangon before and the trip out of the port and into the city takes 90 minutes.  We had an exercise and movie day (Allied and Patriot’s Day were the movies) and an early dinner since our trip to Mandalay was to begin the next morning with a 4:30 breakfast and a 5:20 departure to the airport.

10 people from the ship were in the group going to Mandalay.  On our last cruise we went to Bagan.  This time there were 40 people going there so we felt lucky to have such a small group.We were met bright and early by our guide, Moh Moh. The trip to the Yangon airport took 90 minutes and Moh Moh gave us some information about Myanmar, formerly Burma.  This is primarily a Buddhist country and all males are required to spend some time in a monastery.  It can be as little as a week, but most stay longer.  People who are very poor often send their children to live there and many of these children become monks.  All of the food is donated to the monks – they go door to door every day -and they are only allowed breakfast and lunch, no food after 12 noon.

They had a woman in line to rule Myanmar, but she married a foreigner so she is ineligible. She is, however, the prime minister and is well respected.  The country is still under quasi military rule although it has been open to tourists for several years now.

Tourism is opening up here since the government has changed, but like other countries in Southeast Asia, the tourist season ends in April because it is just too hot. Both men and women wear longyis here, the men tie theirs in front and the women tie theirs on the side.  Some of the younger people don’t want to wear the traditional garb so we did see some jeans, but not many.

Most of the women and some of the men are completely covered to protect them from the sun as we have seen in other countries.  Here, though, they use a root called Thanaka on their faces and sometimes on their bodies, to protect them from the sun.  Some women have it applied in lovely ways but mostly it looks like a chalky circle. These girls have leaf shapes on their cheeks.  Moh Moh is showing us the root that is used. 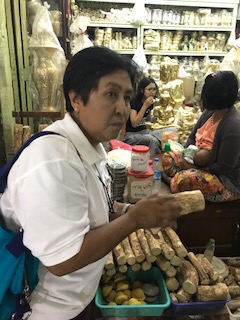 The country is really not clean, though.  There is trash everywhere and even in our very plush hotel, they tell you to only drink bottled water. The fifteen year tourist boycot, while lifted now, increased tourism but not the infrastructure to handle it.

People live in all kinds of housing, some look habitable to us and others are really less than basic.  It is not unusual to see people living in the grass huts. 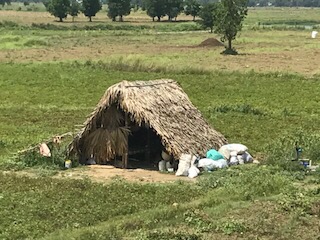 Our flight was on time and we arrived in Mandalay about 10 AM.  Our first stop was in Amarapura, Myanmar’s penultimate Royal Capital.  We visited the U Bein Bridge which spans Taungthamen Lake and is the longest teak footbridge in the world.  There were lots of people walking across it and it was quite a sight.  The waters here are full of the nasty water hyacinth which really clogs the waterways and is hard to get rid of.  We saw a number of people begging on the bridge.  One of the saddest sights was this little girl holding an infant.

Mandalay was founded in 1857 by King Mindon partly to show the British, who were ruling Lower Burma from Rangoon (now Yangon), that his kingdom was still mighty.  It was taken by the British in 1885 and prospered until the Japanese invasion of 1942 during which many of the buildings were leveled by bombing.  Moh Moh was a great guide and explained the history very well.

She told us (I didn’t remember) that the Road to Mandalay in the original Kipling poem, was not a road but a river!  I also didn’t know that George Orwell lived in Burma for much of his life.  He was born Eric Blair.   He wrote his first novel in Burma and his most well known works, Animal Farm and Nineteen Eighty Four were banned by the regime until quite recently.

We saw the marble carving places and a weaving workshop where they weave the lovely longyis.

We had visits to monasteries – the kitchens in this one were particularly interesting. They are feeding 1200 monks here! 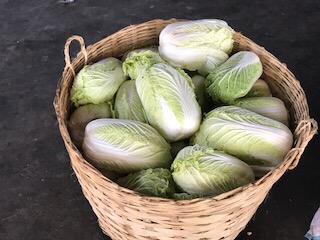 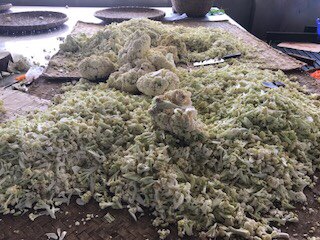 And andaw monastery (Golden Palace), Su Taung Pyai and Kuthodaw Pagoda.  The Kuthodaw Pagoda is known as the world’s largest book as there are Buddhist scripture carved on 729 marble slabs inside.

The Shwenandaw Monastery is one of the best examples of traditional Burmese style wooden monstery building in the country. The monastery was once part of the Mandalay Royal Palace. 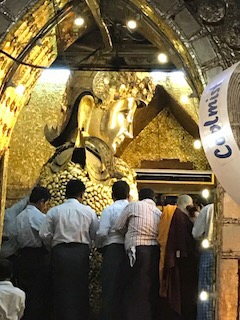 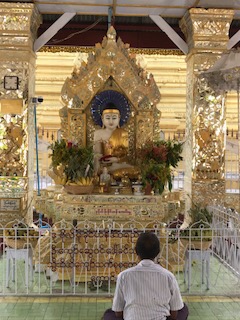 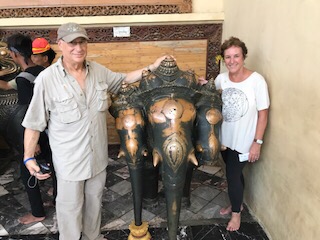 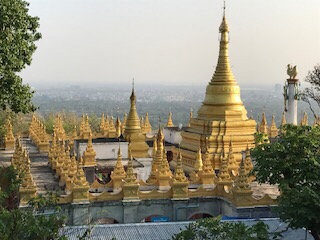 Women were not allowed to touch or approach the Buddha here.  The men were putting gold leaf on the Buddha and they had a camera with video to show the women!  And like other temples, arms and knees had to be covered and no shoes or socks could be worn in the temple.

We had a ride in one of those trucks with the benches on the sides up to the top of Mandalay Hill for sunset.  The road wasn’t nearly as bad as the one in Ko Samui! 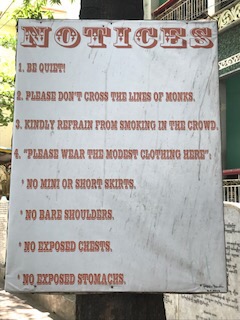 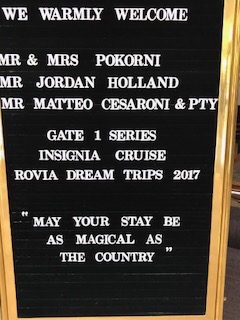 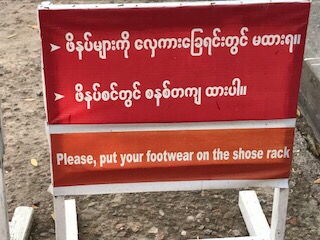 If Thailand is the “Land of Smiles”, I would say that Myanmar is the land of kind and friendly people. We met so many people who wanted to talk, practice their English, delighted in having their pictures taken, and lined up to have their pictures taken with us as Westerners are unique to them. 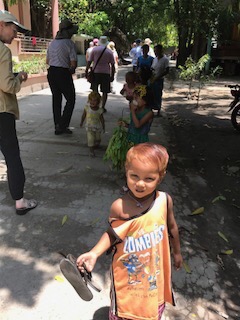 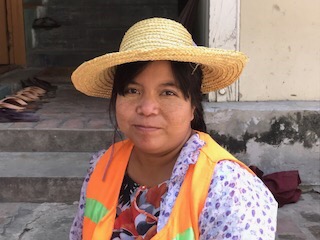 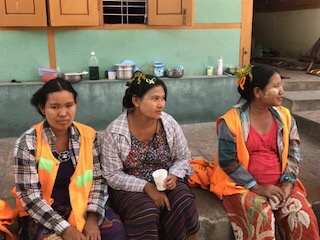 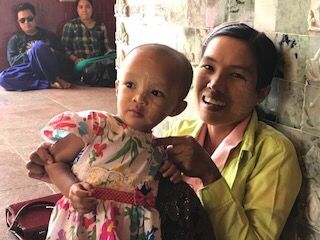 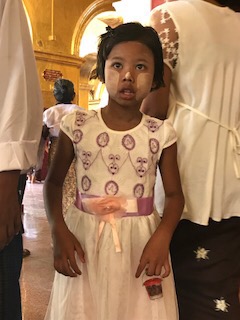 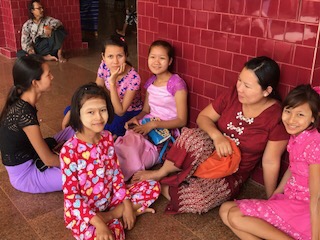 These two 21 year old men, both university students – one studying philosphy and one studying physics – wanted to talk for a long time to practice their English.  The physics student (on the left) is already a monk and the other is a novice. Oh, and the third one is Norm! 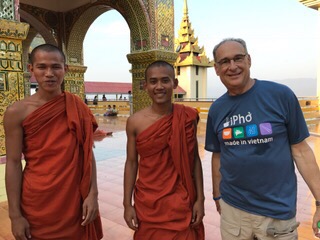 After the sunset (and a very hot day), we went back to the hotel for showers and dinner.  The food was delicious, so many wonderful choices with plenty of noodle dishes to choose from.

From our hotel window, we could see the temples we had just visited with the beautiful lights on them. 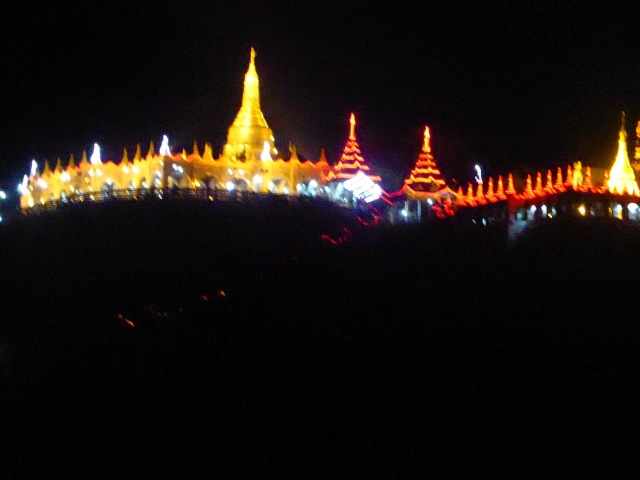 The next morning, we were awake in time to watch the sunrise, explore the beautiful hotel grounds and have a delicious breakfast. We left for the airport at 8 AM.  Our flights, both arriving and leaving, were on time and even though they were only 1 hour 20 minutes, we had a boxed meal and drink!

We arrived back at the ship around 2 and relaxed for the rest of the day.

Myanmar is a wonderful place to visit – and you must bear in mind, as Moh Moh says, that it will take as much as 20 years to bring their standards up.