Today starts a string of 15 days in port – no restful sea days!  It will be a whirlwind of activity, tours, great food and wine and hopefully this fabulous weather will hold out.

We had a sea day yesterday and had the captain’s cocktail party followed by dinner with Bernie (HR manager) and Emmanouil (he likes to be called Mano), the chief purser on board.  We had a great dinner and enjoyed a beautiful sunset.

On our last visit to Barcelona last year, we missed seeing the inside of La Sagrada Familia because I had an ICF Board call and we didn’t realize we needed to book tickets in advance – so the only time we could have gotten in was at the time of the call.

We didn’t make that mistake this time – we booked tickets in advance.  We had visited there in 2003 and wanted to see how much has been completed.

We set off on a walk at 8:15 AM to get to the Basilica for our 10:30 AM tour. We wandered past the Columbus statue and continued on the Ramblas (the world famous boulevard) and around the charming streets and then sat and had some water before we were allowed in at 10:15.  It was a long walk but the weather was beautiful. 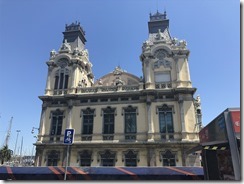 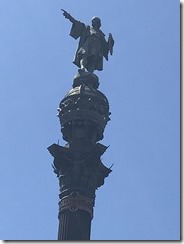 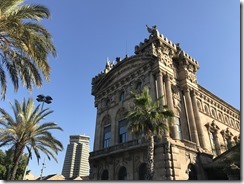 This is Antoni Gaudi’s masterpiece and Barcelona’s most distinctive landmark. It was started in 1882 and was far from finished when Gaudi died in 1926. It is still not finished today. It is SO much different than 14 years ago!  There wasn’t even a roof then and now, even though it is years from completion, it looks so different.  It is a UNESCO World Heritage Site.  The construction continues solely from donations.

Every detail in the basilica is photo worthy yet they will not do it justice.  We did the audio tour which started outside. 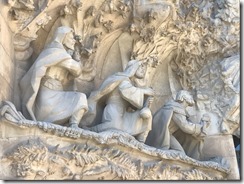 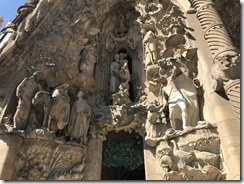 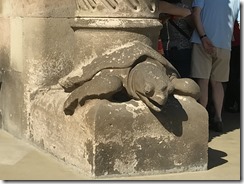 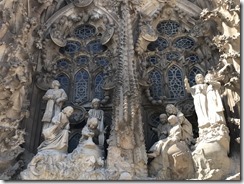 The significance of each of the statues was explained on the audio tour.  The turtles represent land and sea, one has flippers and the other has feet!

Inside the basilica is so beautiful. The first three pictures are the doors, one from far and the other two close up. The stained glass and the columns are just indescribable. Gaudi envisioned it as a forest. 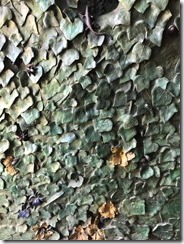 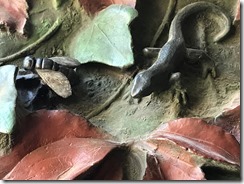 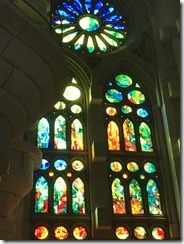 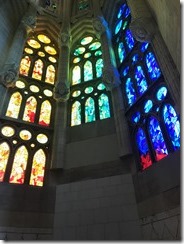 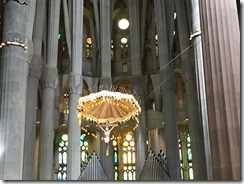 After spending about an hour in the Basilica, we had an 11:30 tour in the tower on the Nativity facade.  You take an elevator up and it is 400 steps down. Beautiful views. The last shot is looking down on the staircase! 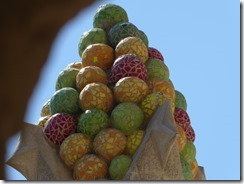 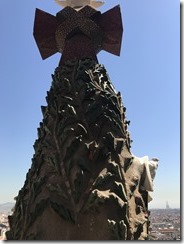 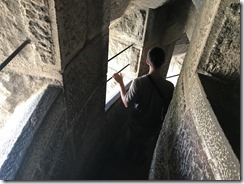 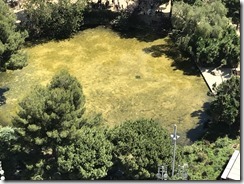 We had a delicious paella lunch, I had a pedicure and we walked back to the ship.  We logged 9.1 miles!

Sailaway with sangria and entertainment on the deck finished the day in grand style! 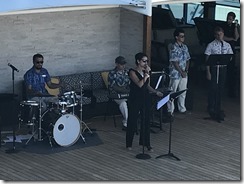 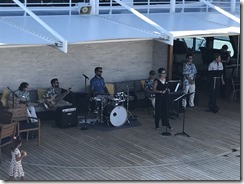 You could spend a couple of weeks in Barcelona and never get tired of the city, the building architecture, the food and the people. 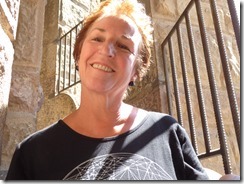 This entry was posted in Europe, Excursions, Food, May, World Cruise 2. Bookmark the permalink.