Our captain told us that we would be sailing by the rock at about 6:30 AM so I was out on the balcony in the semi-darkness to catch the photos.  It was more like 7 AM and I did get a few as the sun rose. 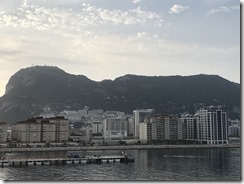 We have never visited Gibraltar before and were looking forward to our tour.  Since it was an afternoon one, we decided that instead of our usual 1 hour on the deck, we would walk to town and back before the tour. We enjoyed that – many of the shops were closed because it was Sunday but the cafes, jewelry stores and souvenir shops were open.

We strolled through the town and the lovely Trafalgar Cemetery. And we came upon this monkey with the beer bottle! It looked like he was posing just for us! 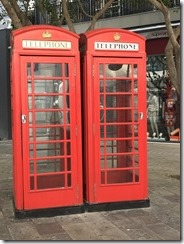 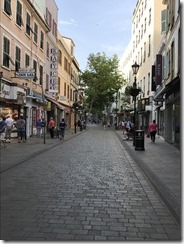 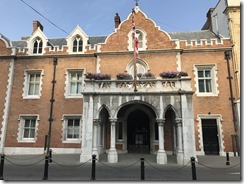 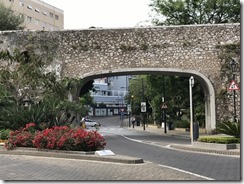 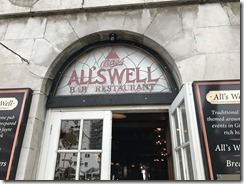 We were definitely surprised that the drivers are on the same side as Europe and the US, not like the UK.  It was explained that so many people come from Spain to work here that it would be confusing and hard to maintain otherwise.

After lunch we set out on our tour with 16 other people and our guide, Brian. Gibraltar is very small, 5.1 K in length and 1.25 K in width and 10 miles around.  Brian was a great guide – lots of historical information. 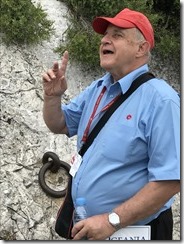 Brian told us about the top three contributors to Gibraltar’s economy:

One of the unique things about Gibraltar is that is shares a border with Spain. In fact, we were surprised that there is a runway for planes between Gibraltar and Spain, and a road crosses right through it. So when a plane is about to take off or land, they have to stop pedestrians and traffic!  It was built during WWII using rocks hewn out of the tunnels (more about the tunnels later). Brian says it is the 5th most unsafe airport in the world and the 4th most picturesque. Wonder what the other 4 unsafe ones are?

The people here are quite worried about the effects of Brexit because if the border between here and Spain is closed to free transit, it will greatly affect the economy.  About 8000 people/day cross over to work here. The kind of limbo between Britain (Gibraltar is one of its last remaining colonies) and Spain is strange because it seems to belong to neither.  There have been referendums in the past and the vote was to stay as is, but people feel it will move to closer ties to Spain. Who knows?

We took the cable car up to the top of the rock – well, it wasn’t really the top, we still had many steps and ramps to walk, but we did reach the top – 1300 feet above sea level. Here are some of the views. The one of the ships shows our ship (the small one) next to a P & O Ship, the Ventura. 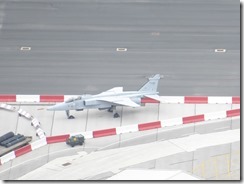 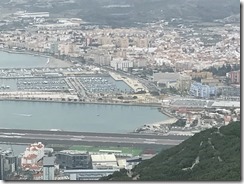 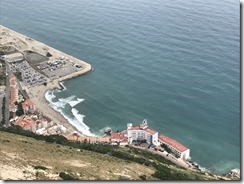 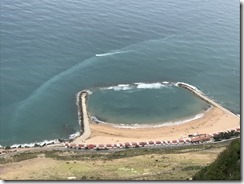 And here is where the Atlantic Ocean meets the Mediterranean Sea. Atlantic on the left, Mediterranean on the right. And within a short travel window, you can go to Africa (Morocco), the Canary Islands, UK (Gibraltar) and Spain. In fact, before opening of the borders, people used to have to take the ferry from Gibraltar to Morocco and then back to Spain!

The rock area is known for the so called Barbary Apes, actually macaque tail-less monkeys and they are everywhere.  You would get a $4000 fine for feeding them, but we were certainly warned not to bring any food because they are the “customs agents” and take anything they can get! We saw one with a week old baby. They certainly are scene stealers. 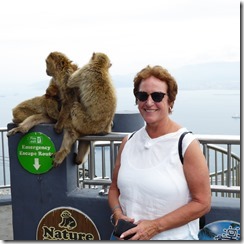 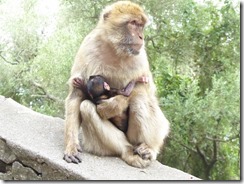 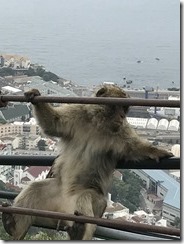 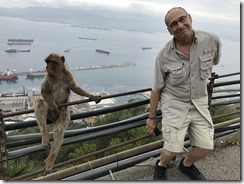 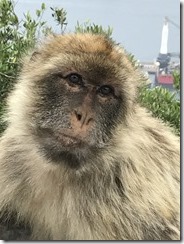 Brian told us that the grooming you see has nothing to do with insects as we thought, but they pick the solidified salt off of each other.

Our cruise director, Ray, Chef Farid, Jennifer and Juan Carlos did the walk from town up to the rock.  Brian told us that although people say “solid as the Rock of Gibraltar”, the rock is not really solid – there are over 200 caves and many tunnels here. 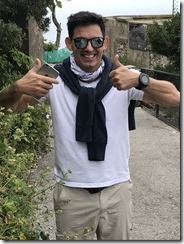 We visited St. Michael’s cave which is a natural grotto used as a hospital during WWI. Amazing place! Part of the cave is called Cathedral Cave because the formations look like a pipe organ.  And the picture next to it looks like ET!

Here is a cross section of a stalagmite:

Next we visited the Great Siege Tunnels which were carved deep into the Rock of Gibraltar to hide cannons used to defend the British colony of Gibraltar against attacks from the Spanish and French from  1779 – 1783,  They were carved out of the solid limestone using just gunpowder explosions and picks and hammers.  Interesting history. 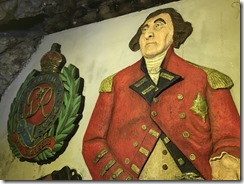 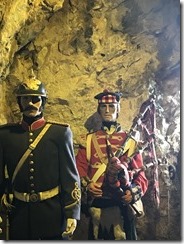 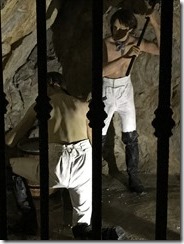 This entry was posted in Europe, Excursions, May, World Cruise 2. Bookmark the permalink.