Pago Pago is pronounced Pango Pango and it is absolutely lush and beautiful.  The town is at the western end of an L- shaped bay and surrounded by beautiful mountains.  Here are a couple of pictures taken as we sailed in. 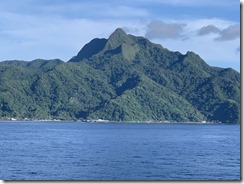 We made plans with Rodney and Candace to go hiking at the National Park.  When we got off the ship and realized how hot and humid it was, we took advantage of one of the many bus and taxi drivers who waited outside the port gates to offer guided tours of the island.

We got maps from Miss American Samoa! 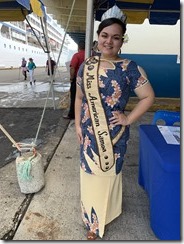 We met Jubilee and quickly agreed to go in his bus for a 3 hour tour – for $20 each. These wooden buses are everywhere on the island.  They are very colorful and all decorated differently.  Here is Jubilee with Norm, Rodney, Candace and our bus. 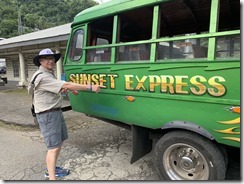 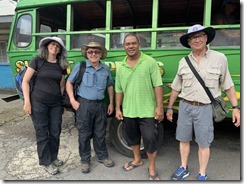 Now, Jubilee would be quite happy if we got a few more people to go with us on the bus.  So as we passed passengers from our ship, we yelled out the window to see if they wanted to join us!  We ended up with 8 more people.  Most of them started to walk somewhere and found out how hot it was.

I should mention here that for all of the ports we have been to before – you can read the descriptions on the blog post from that port.  For example, here is the link to the post from our trip here 2 years ago. If you are thinking of visiting any of these places, you can see what we experienced on our visits.

So, we set off on our adventure.  We immediately noticed the no drinking, no eating inscription which was written at the front of the bus.  Jubilee told us “don’t worry about that – it is for locals!”

Jubilee took us to the western part of the island first. About 65,000 people live on the 76 square mile island and around 9000 live in Pago Pago. Including the marine waters, the area is about the size of the state of Oregon or New Zealand. 90% of the island is covered in untouched tropical rainforest.

The local people retain much of the traditional way of life.  In fact, the organized ship’s tours to the villages had a requirement that women wear long pants, not shorts.

There are guest houses called “fale” that look like large gazebos where people entertain visitors or hold ceremonies like weddings. They are open and without walls to symbolize the villagers’ unrestricted culture. We saw many different styles. The first one is a ceremonial one with impressive carved columns. 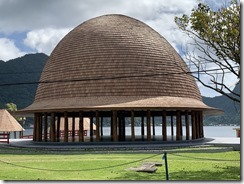 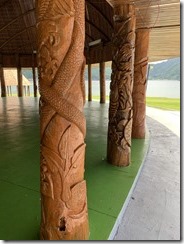 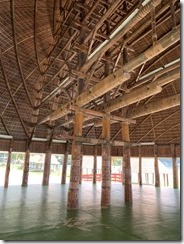 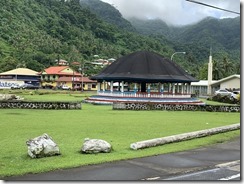 It was very interesting to learn that many families bury their loved ones in their front yards.  There are also cemeteries but we noticed so many gravesites in the yards.  If they have burial sites on their properties, the families are never allowed to sell the house, nor can the government take it over for any reason. We did see quite a few deteriorating houses and wondered if that was the reason. 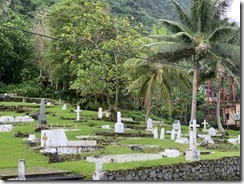 The road doesn’t go all the way around the island, so we went to the western area first, then went back to the eastern side before returning to the ship.  Jubilee wanted to take us up to a high point for some beautiful pictures of the landscape, but part way up, the bus started to overheat, so we didn’t do that.  By the way, these very interesting buses don’t have air conditioning, but the breeze once we travel makes them quite comfortable.

Here are some of the pictures of the sights we saw. The water is clear as can be. 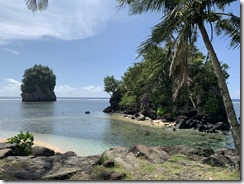 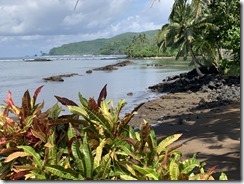 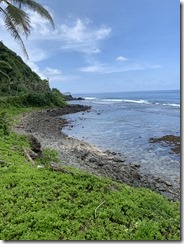 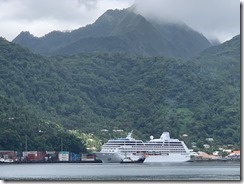 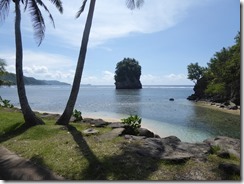 So, this island is an American territory and dollars are the currency. There is a US post office and of course, a McDonalds, in fact there are two of those. 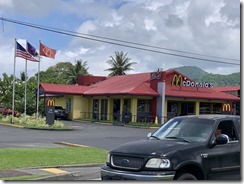 Jubilee told us of the earthquake and tsunami that happened on 9/29/09.  60 people died and he said if it had happened at night more would have died.  We stopped at the Leone Mission Monument that marks the contribution of Reverend John Williams who landed here in 1832 and began spreading Christianity.  The island is predominantly Christian and we passed MANY churches. 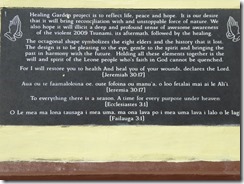 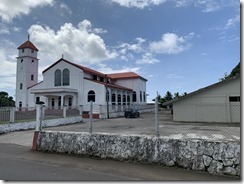 We passed a school and on the way back, Jubilee pulled into the parking lot and picked up his daughter. The students were happy to see us!

When we passed Jubilee’s house, his wife came to get his daughter!

We went to “two dollar beach” which is also known as Avaio beach.  It now costs $5 but the name remains the same. 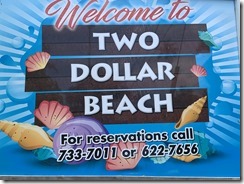 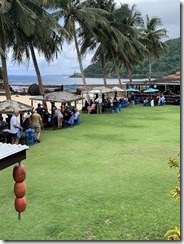 There is a large Starkist tuna processing plant on the island – about 2000 people work there. 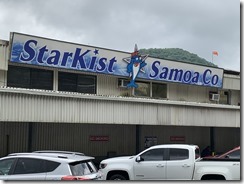 Some shots of us in the beauty of American Samoa.

We headed back around the bay. As Jubilee saw people walking he offered them rides back to the ship for $5. We picked up about 6 more passengers. Curiously, there are two places named for Ronald Reagan. 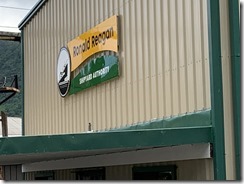 Tonight, countdown to the Oscars continues with the movie BlackKKKlansman.  We have already seen it and liked it a lot.  I always say that the movie night is “all about the popcorn” which we only get on movie night, so I may go just for that!

This entry was posted in February, South Pacific, World Cruise 3. Bookmark the permalink.