At Sea in the South Pacific

Yesterday we had the beautiful brunch that the chefs prepare several times during the 6 month voyage.  Today was the first and as always, it was wonderful – both in taste and in appearance.  You can order specialties from the menu or choose items from the buffet.  Here are some pictures of the Grand Dining room feast. The delicacies are too numerous to mention! 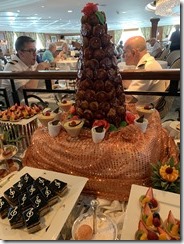 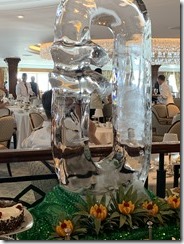 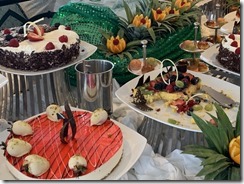 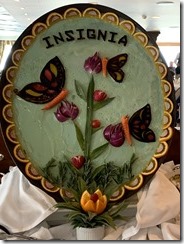 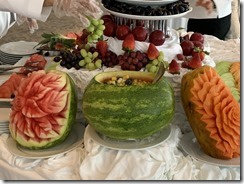 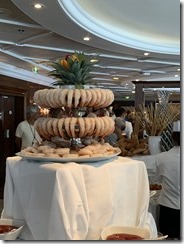 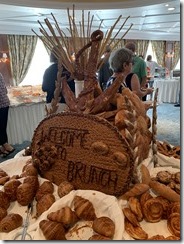 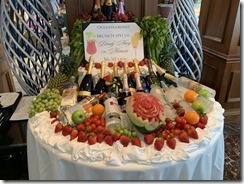 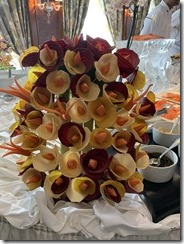 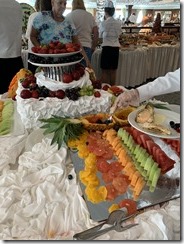 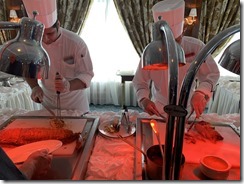 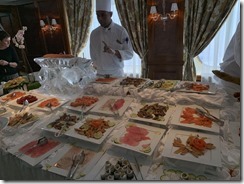 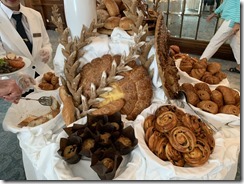 As we left the brunch, we saw one of the bar tenders at the coffee bar, Baristas.  It turns out that he is a fabulous artist. He showed me his picture from Bora Bora, then he said he left out the Insignia in the picture, drew it in and I took another picture of him holding his masterpiece. He did this with a ball point pen! He drew the Insignia at the top right in the picture between the mountains. 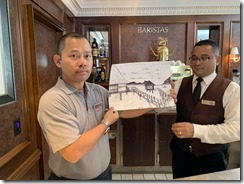 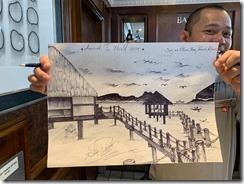 At Baristas, they make specialty coffee drinks all day with these goodies always available.  It is open from 6:30 AM – 6 PM, then it converts to the Grand Bar for the evening. 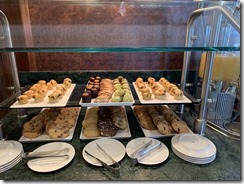 I went to the Zorba the Greek dance class – we are preparing to do the dance at the passenger talent show and this was our third class.  I will post pictures after the show.  No word on when that will be yet.

After a relaxing day at sea, we attended the Oceania Club cocktail party.  This party is held every segment for returning guests.  Of the 650 passengers, 530 are returning guests so they need to have two parties.  Once you have reached a certain status which is calculated on your cruise points, you are invited to both parties. The second one is always the next evening.  I may have mentioned in a previous post that there are lovely appetizers served and the drinks flow freely.  You always get to greet the Captain and the General Manager as well as other officers.  Guests who reach the next level of loyalty have the opportunity to receive their pins at these parties.  We got our diamond level pin already.  Here we are with friends at the party. 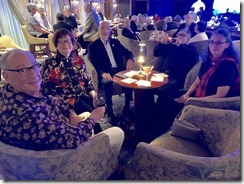 Monday – President’s Day in the US – we are at sea en route to Pago Pago, American Samoa.   It is a beautiful day and the seas are calm compared to a bit choppy yesterday.

I mentioned that I have been reading The Printmaker’s Daughter and going to the book club which is led by Becky Marck.  Not only are we discussing the book, Becky is giving us quite an education about Japan and its culture and customs. We are going to be learning about chopstick rules and have already discussed a lot about art, rituals, observances, etc.  For example, all young people born in that year “come of age” on the same day, January 20, not on their birthdays.  20 is the age at which they can vote, drink, etc. and are considered adults. There will be a lot to observe and learn before and during our time in Japan which will be March 26 – April 4. 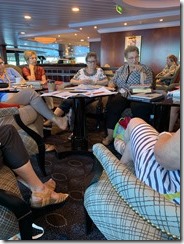 Our wonderful Polynesian enrichment lecturer, June Teruya, is on board until Tokyo.  I took her classes on the last world cruise and she is just delightful. Today we made the woven lei.  She gave us some history and described the correct way to gift someone with a lei.  Then we all made one. They can also be made into hatbands. 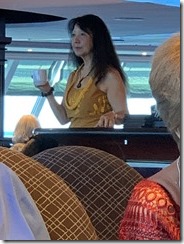 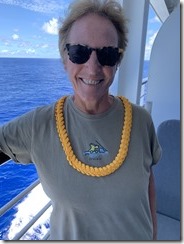 They haven’t been having the blackjack tournaments because not enough people have been coming. We will see if they have one today!

This entry was posted in At Sea, February, Food, South Pacific, World Cruise 3. Bookmark the permalink.