Mother’s Day in Fujairah, our first port in the United Arab Emirates.  This is our third time here and we are doing the same thing we did on both of the other visits – taking the shuttle bus to the mall! There is not much going on here. Supposedly the beaches are nice, but it is 104 degrees out and we are NOT going to a beach.

About Fujairah.  This city is a commercial center with a huge port.  It is the only emirate to front the Gulf of Oman and is the biggest town on that east coast.  It is small with only 1.5% of the UAE’s total area. It is not as heavily developed as the Arabian Gulf seacoast.  But the on the 30 minute ride to the mall, we saw so many apartment buildings that were constructed in the 2 years since our last visit. Most had for rent/to let signs.

Here are 2 different views from our balcony as we arrived this morning.  You will notice that it is very mountainous.  These are the Hajar mountains which run on into Oman.  We will visit Oman on Thursday.

There are so many circular oil storage containers here and also lots of grain towers.

I am not really sure that the Federal Authority for Identity and Citizenship really equates to a “Customer Happiness Center”!! At least not in the US.  Maybe here????

A security person boarded the bus and checked our landing cards and ship ID cards.

Some scenes on the way to the mall. 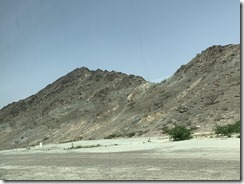 On the way to the mall we passed a new mosque, the Sheikh Zayed Mosque.  Huge.

So, in this mall you would think you are in America.  Many people in western dress (oh, wait, those are all passengers!)

The mall also has prayer rooms for men and women and a movie theater.

The grocery is Carrefour which we see in many countries and it is huge, almost like a Costco or Sam’s Club.  I got plenty of snacks for our suite attendants as they rarely get to leave the ship, especially when the stores are 30 minutes away.  They are known for dates here, so I got some of those to share.  The casino dealers said they weren’t familiar with dates, so I will bring some to them later.

So our main objective was fast wi-fi and previously we went to Starbucks.  Now the entire mall has fast wi-fi and it is a good thing, too.  It is Ramadan here from May 5 to June 4 and all Muslims fast from sunrise until sunset daily.  During daylight no Muslims will eat, drink or smoke.  We were all requested not to eat, drink or smoke in the presence or sight of a Muslim and eating, drinking or smoking in public places during daylight is forbidden.

Starbucks was open and empty.  The baristas said we could order but had to take the drinks out to our cars (didn’t know we were on a bus) or go to the food court which is isolated.  The eating places were almost all closed.

The McDonalds was open but had this folding partition that you could go behind and eat.

We were able to back up our devices quite quickly then walked all around the mall.

I also wanted to get a pedicure, but there were no places to do that in this mall.  Plenty of make-up stores but no salons.

There are strict rules in the mall and really throughout UAE. For instance, it is considered offensive to photograph Muslim women and you must ask permission before taking pictures of men.  Shoulders and knees should be covered and there is no kissing or overt displays of affection.

Photographs of government buildings and military installations should not be taken. Ooops, I guess that Federal Authority I photographed from the bus was a mistake.

When we went to Carrefour, Norm was told he had to check his bag, so he waited outside the store.  I had a bottled water which the security guard had to check and place a label on, and reminded me not to drink it in public, it is Ramadan.

Norm pointed out the Pandora store and I bought some charms.  Thanks, yayas, for my new addiction!!

Before we left, Tom sent me a text to see if we wanted to do something “crazy”- go to a movie.  He wanted to see the Avengers.  Not our genre, so it turned out he didn’t stay to see it either.

Back to the ship for lunch and relaxation.  Tomorrow, onward to Dubai.

This entry was posted in Asia, May, World Cruise 3. Bookmark the permalink.