This was our third visit to Dubai and it seems to grow bigger each time we are here.  Here is the view from our ship as we approached the harbor. The tallest building in the world (for now anyway), is the Burj Khalifa, the needle like structure in the picture.

The plan for today- take the shuttle bus to the Dubai Mall, get a pedicure, do some shopping and, if it is clear enough, go to the top of the Burj Khalifa.

The Queen Elizabeth 2 is here and is now a hotel/restaurant.

And check out this other yacht!

Dubai is spotlessly clean and growing all the time. What used to be desert is a mecca of shopping destinations, hotels, restaurants, bars and nightclubs. Not a blade of grass or flower is dead or out of place.

This building is the Dubai frame. It is the world’s largest picture frame and is supposed to give you a view of modern Dubai from one side and older Dubai from the other side – it “frames” the city.

About the malls.  Dubai is famous for its many malls and more are being built all the time.  There are currently 65 malls with 10 more being built – in a city of 3 million people!

Tax free shopping makes things less expensive in most cases than in their countries of origin.

In the Dubai Mall, our destination, there are 1300 stores and hundreds of places to eat (won’t list them all!)  – and the aquarium/underwater zoo and skating rink are in this mall.  It is attached to the Burj Khalifa.  The stores include high end ones like Harry Winston, Tiffany, Cartier, Rolex, St. John and many more.  There are 5 Starbucks locations. It stays open until 2 AM! Most hotels have shuttles and there are many buses bringing people to the mall.

Of course, it is Ramadan and so many of the places to eat are closed and others have curtains or other partitions to allow non Muslims to eat there.  Some of our friends ate at the Cheesecake Factory.

I had a great pedicure and then we decided it was clear enough to go up in the Burj Khalifa.  We were here 4 years ago and went to 124/5 in the building then.  One thing that is remarkable is that one floor of the building was completed every 3 days!

They know how to do waiting rooms – with screens that show construction, ask trivia questions about the Burj and provide a view of a model of the building.

The Burj is currently the tallest building in the world. There is one being built in Saudi Arabia which will be taller when it is completed.  The Burj was completed in January 2010 and is 2722 feet high.  It boasts the highest pool, the highest outdoor observation deck, 57 elevators and 160 inhabited floors.  There are floors above but only accessible by ladder. You need to take 3 elevators to get to the top.

Our guide took us to the 148th floor first.  Here is the lounge. 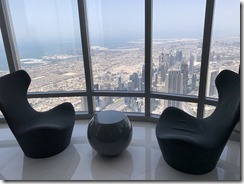 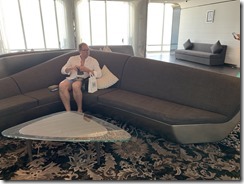 I will show many pictures that we took from here – amazing views of the growing city, the harbor and the part of the city that is still growing up out of the sand!

The picture above shows the World Islands in the distance.  300 islands were constructed here from dredged sand.  Construction began in 2003 but money ran out in 2008.  Finally they were finished but development has largely failed.  We had a World Cruise event here 2 years ago, on the Lebanon island which is the one that has been developed commercially and is used for weddings, corporate events, etc..

The islands represent all of the continents. In 2014 an investment group announced plans to develop the European group of the islands into a “Heart of Europe” concept, but not too much information about progress is available.  There have also been reports of some of the islands sinking into the sea but we couldn’t verify that info. 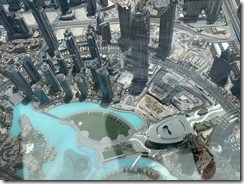 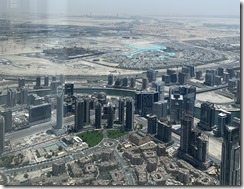 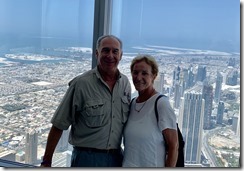 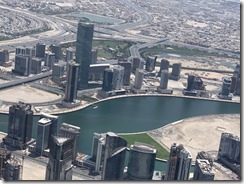 This is just part of the mall seen from the top. 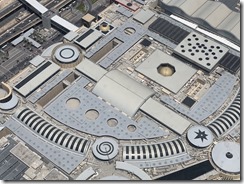 They had this series of panels that you walk on and it makes a cracking sound and changes to make it look like you cracked through and will fall to the ground. 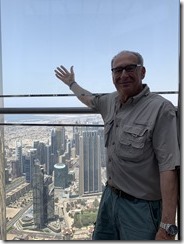 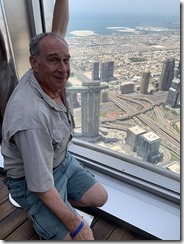 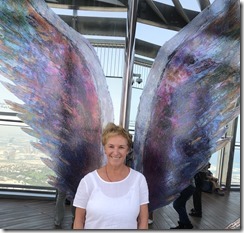 As you leave, there are models and descriptions of the building of the Burj – very interesting.

We had time to browse the mall and here are just a couple of pictures, including the huge aquarium. 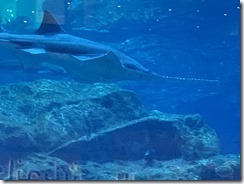 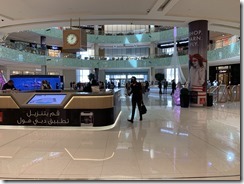 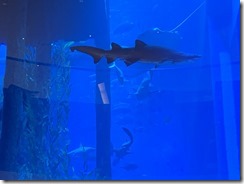 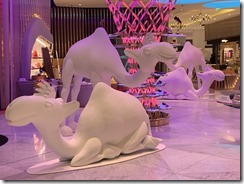 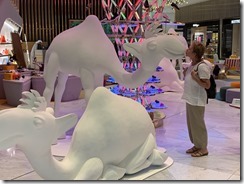 They are big on camels here.

Here are a couple of other buildings we spotted on the way back to the ship. 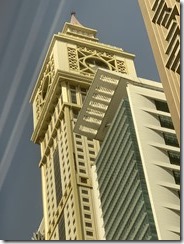 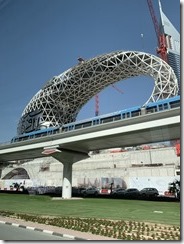 Today was embarkation day for the next segment of the world cruise, so we had yet another lifeboat drill. Next – 2 days at sea before our next port of Oman.

We read news reports of explosions on four oil tankers that belonged to UAE, Saudi Arabia and Norway near the port while we were there –  in Fujairah. Some of the ships contained oil to be delivered to the US. It is thought that this is about Iran. In this area we do have extra security on our ships but no one is expecting any issues for us.

This entry was posted in Asia, May, World Cruise 3. Bookmark the permalink.