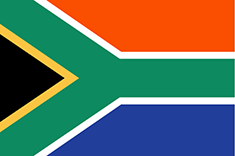 November 26, Thanksgiving Day in the US

It is hard to believe that we are already at Thanksgiving, and what a different one this was. We sailed into the harbor of Richards Bay and first heard the sound of a helicopter very close by.  It turned out to be the pilot (the official from the local port that arrives on to the ship to help the captain navigate the harbor) and two immigration officials. That’s the first time in all of our cruises that we had officials arrive by helicopter.  And they didn’t land on the ship, the men were lowered onto the back deck via ropes. South Africa is a huge diverse country and in some ways is still recovering from the apartheid years. It is the size of France and Spain combined and twice the size of Texas!It has an excellent infrastructure – the roads were as good as in the US.  But there is a lot of poverty and the African areas – generally poor – are often tucked out of sight. Our excursion today was to Shakaland.  This is the oldest Zulu cultural village in Zululand and was originally built as scenery for the miniseries Shaka Zulu in 1986.  The village replicates the kraal of Senzangakhona, father of legendary King Shaka, who united the Zulu nations by conquering numerous clans and tribes.  It really a living museum.  People can also come to stay here. The village itself has many round huts in a circle around the cattle craal.  Chief Malinga and his family live here and we got to experience Zulu culture, costumes, rituals, dances and food. 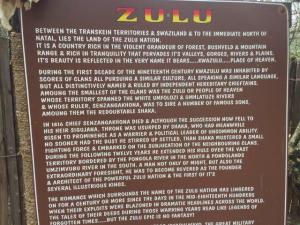 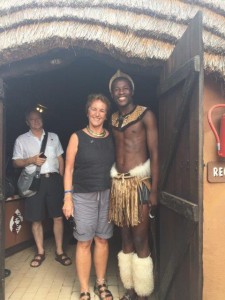 We first had a Zulu show and wouldn’t you know that I was picked out of the audience to do the dance with the native dancers.  And another guest, David, was also picked out. Here are some shots of this! 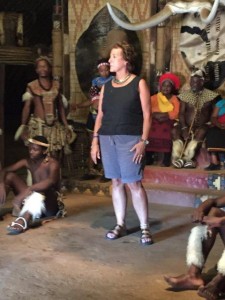 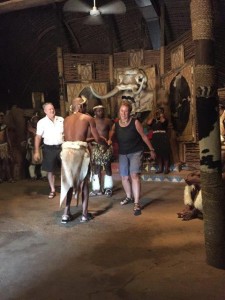 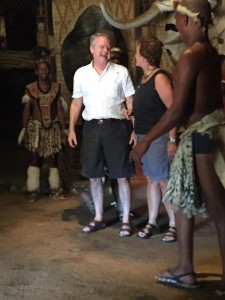 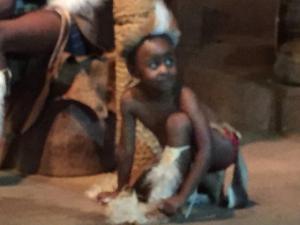 This little guy was adorable, trying to do the same dances as the men, and he was pretty darn good 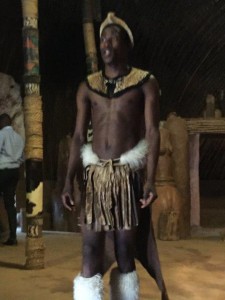 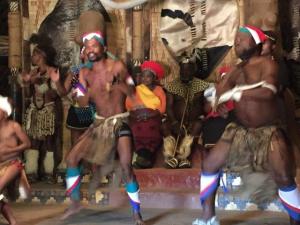 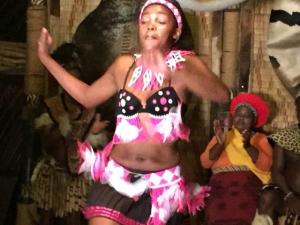 We had a delicious lunch in the Kwabonamanzi restaurant prepared by the Zulu women, then we had some stories around the small replica of the village. 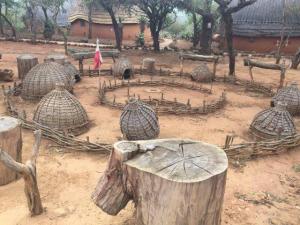 We were told to pick up a stone and spit on it then throw it onto the stone pile.  If it stays on the top, you will have good luck.  Ours stayed pretty near the top. 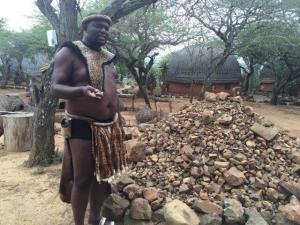 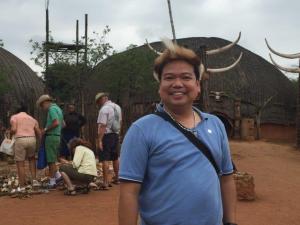 One of our crew, Mel, who joined us and purchased this head gear! 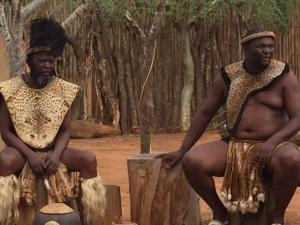 The chief is on the left

We saw weaving demonstrations, beer making (and we got to taste the beer), and we really enjoyed the day. 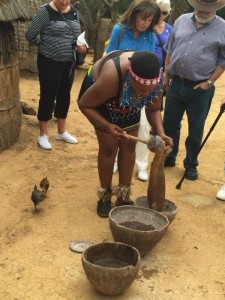 Making the beer (the chickens and chicks wait for the grain!) 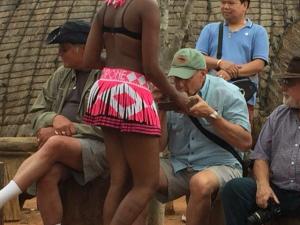 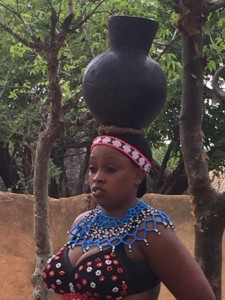 Amazing how they balance the pots 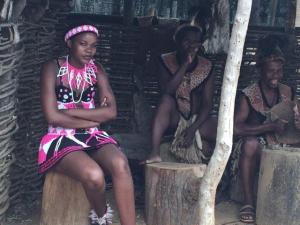 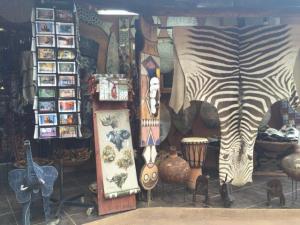 We saw part of the movie of Shaka Land, which talked about King Shaka who was born to a woman who was not married.  So both of them were actually bullied.  When he grew up he became a warrior and invented a new kind of spear that would not have to be thrown and it led to many victories in battle. In fact the British army was defeated by the Zulu in the Anglo Zulu war, the only time the British army was defeated by indiginous people (and Dick, our guide, says they have never forgotten it!) On the way back we had a wonderful glimpse of several giraffes along the road.  We saw them from afar in the morning, but they were pretty far away.  This was as if they were waiting for us! 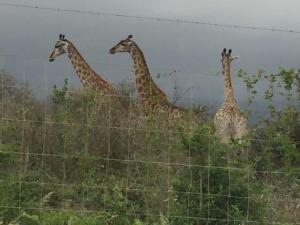 When we returned to the ship, we had a chance to have some iMessage exchanges with Adam and Mark, and phone calls with Dad and my sister Debbie.  A nice part of our Thanksgiving.  And, of course, we had turkey with all of the trimmings for dinner. A Thanksgiving we will always remember!

This entry was posted in Africa, Excursions, November, World Cruise 1. Bookmark the permalink.