Still at sea on the way to Hilo, Hawaii

At last, we arrive in Hilo tomorrow!. The past two days at sea have brought 80 degree weather and much calmer seas. This is especially good for the people who depart the first segment in Honolulu on Saturday since we have had those rough sea days.  Lots of people by the pool today and we enjoyed breakfast and lunch outside on the terrace.  We probably will have dinner outside too as it is a Pan-Asian theme tonight, and we love the food of that region.  Of course all of the food is terrific, it really is known as the best at sea.

We are now 5 hours behind east coast time and it seems strange that it is already afternoon at home when we are having breakfast.

Here is a photo from San Diego that Marie took.  For some reason it wouldn’t download the first time so she kindly sent it again. The ship on the left is our ship, the Insignia.  The one on the right is the Star Princess which is  4 times as big!

We have been busy on the sea days as usual.  We both finished our first quilt squares.  As I posted before, Norm did the Around the World logo and I did the square representing Nicaragua.  He is getting lots of compliments as so far he is the only man who is participating! Maybe others will be inspired.  Norm is now going to do Petra and I am still deciding.

Here are some of the other squares that people are working on.  The one with the clothesline uses the little clothespins that we get on the miso glazed sea bass wrapped in a hoba leaf, a lovely dinner item. In the background are the tags that are put on our clothes when they go to the laundry- our suite number.  Sukey has been collecting them from many of us for this project. 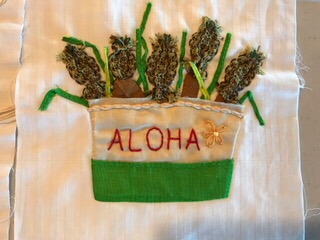 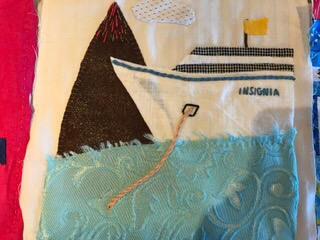 We have been going to the enrichment lectures by Dan Ostler www.ostler.com

He did one on whales, one on sea turtles and todays was on Pearl Harbor.  Very interesting, as he is so well prepared and knowledgeable.  A couple of things I didn’t know- whales are able to use only half their brains when they are sleeping.  Sea turtles return to the same beach that they were hatched from 20 years later when they lay their eggs.  Sometimes this can be a swim of 1500 miles or more.  No one knows how they remember, but they do!

We also had a session with some of the senior staff where they answered questions from the guests.  There were lots of questions and I won’t try to write about all of them.  We did learn that this ship uses 1500 eggs and 200 pounds of butter a day!

Last evening we were invited to dinner with Chantelle from Brisbane, Australia – the Oceania Club ambassador, and Rohanca from Cape Town, South Africa, the Destinations manager.  Joining us were sisters Mary and Georgina who were on the last world cruise with us.  It was a really fun evening.  We learned that the 2018 world cruise is already sold out! They will be announcing the itinerary for 2019 in about a month, so stay tuned.

About Hawaii- native Hawaiians believe that the first hula was performed by a god or goddess.  Because of this, it is considered more as a sacred ritual than a form of entertainment. The movements of the hands and body have specific meanings. They may represent animals, plants and even war.

The local cuisine (which we will have tomorrow at the world cruise special event in Hilo) reflects the settlement and immigration in the Hawaiian Islands. Pineapple is still a major crop here.  Who knows why but Spam is popular here and is referred to as the Hawaiian steak! They consume the most Spam per capita in the US.  I won’t be having any of that, thank you!

The plate lunch (called loco moco) is two scoops of rice, American macaroni salad topped with a hamburger patty, a fried egg and brown gravy.  No thank you on that one too.  We do have the menu for tomorrow’s event but I will wait to post it after the event. No Spam or loco moco on it.

We have seen several good shows during these sea days too, Colleen Williamson was an especially good singer.  Tonight, though, is the guest/crew talent show.  Who knows what we might see. Last cruise there were some pretty crude joke tellers!!!

Ok, onward to Hilo.  We have visited the big island of Hawaii twice and have been to Hilo.  We will explore in the morning and we leave for the event at 1:15.

This entry was posted in At Sea, January, World Cruise 2. Bookmark the permalink.

2 Responses to Still at sea on the way to Hilo, Hawaii