Every evening, we get the daily Currents, a newsletter from the ship describing the activities that will be happening the next day. So for the April 1 edition, here is what we saw:

Needless. to say, we are on our way to Vietnam, so the forecast could not possibly be snow, nor are we docking in Las Vegas, Nevada, USA.  That would be hard in any case since there is no port nearby.   These things led people to suspect just about anything that was reported, even the time change of going back one hour (which was true!).  Lots of fun with gullible people.

To mark the (almost) half way point in the trip – we are actually on day 85, not 256 – as indicated in the Currents.  So 90 would be half way, but the chef and the general manager wanted to celebrate today since we will be in Saigon (Ho Chi Minh City) on day 90 and these things work better on sea days. 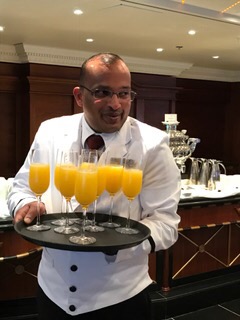 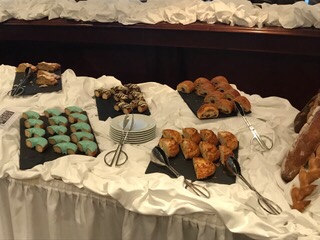 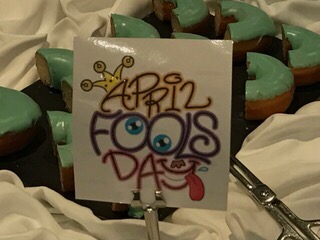 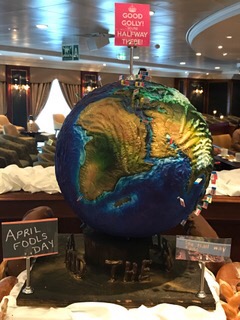 Our cruise director, Ray, entertained us with a panel – including general manager, Yves, ATW concierge, Ricardo, Oceania Ambassador Jennifer, ATW hostess Tricia, and  then joined by Brad from the entertainment team and ATW host Steve.  Ray read things about their past.  We had to guess which person. he was talking about.  And there were no April Fools jokes.  Some were easy, but who would have guessed that Ricardo had been a male stripper and Jennifer almost got arrested when her boss tried to steal a place setting of White House china on a visit there!

Lots of fun.  All the rest of the sea day activities went on around the ship – getting ready now for 2 days in Ha Long Bay.

This entry was posted in April, At Sea, World Cruise 2. Bookmark the permalink.