We happen to have two Irish performers on board right now, so with his usual creativity, our cruise director, Ray, instituted St. Paddy’s Day in June last night in Horizons at 10:30,  complete with the green beer and shamrock cocktails.

One duo is called “It’s Five O’Clock Somewhere” – Tabitha and Adam – Adam is Irish. They did a lot of Irish music and at one point Ray joined in. 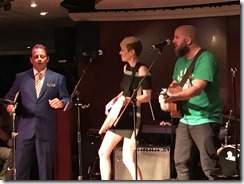 Our Irish comedian, Billy Boyle, also told some jokes – we had heard most of them at his prime time show but there are a group of Irish travel agents on board and they yelled their appreciation!

We were warned about high winds and a rough night at sea which would start around 9:45 PM.  And, at 9:46, the first huge wave hit right on schedule.  Pretty accurate, Captain! We rocked all night and as a result were about an hour late into port.  Slept like babies though.

The sail in was beautiful and the weather is a high of 66 today.  Just lovely. 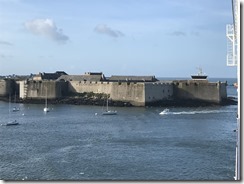 We hadn’t been in Lorient before but did not book an organized tour as we knew the town was walking distance from the port and we love to walk around the European towns and have a leisurely lunch. Most of the time we log about 8 – 9 miles and prefer walking to taking the shuttles as long as walking in the port area is allowed.

Lorient is in the province of France called Brittany. It is deeply infused with Celtic culture.  It was independent until the 16th century.  Many Bretons continue to regard France as a separate country, but few support Breton nationalism.

Lorient was the original home of the French East India Company.  After 1820 there were no more maritime trade activities and Lorient became a military port. During World War II, a submarine base built by the occupying German forces placed Lorient at the heart of the conflict.  It was the headquarters of the Battle of the Atlantic and was heavily bombed in 1943 and left in runs.  Lorient was rebuilt with the design by architect Georges Tourry but very few of the old buildings remain.

Norm’s quest was to find some new walking shoes, which he did, and mine was to find new bathing suits.  I brought 3 on board and they are all so old, they are stretched out.  I was successful in finding 3 new French ones and immediately threw away the old three. (no photos!  I only photograph jewelry and aprons!)

After that, we did have a nice lunch on the Place Aristode Briand which was rebuilt after the war and was the gateway to the city.

We then walked to the historic area and saw what is left of the old buildings in the town.

The old hospital is the first picture, now the Hotel Gabriel with its French gardens. The two windmills  were used to grind wheat to make the “sailor’s bread” or “sea biscuits”. One of the mills was converted into a navy observatory in the 19th century.  A high narrow window was created to allow for a lookout to gaze at the sky every night and calibrate the precision mechanisms of the navigation instruments. 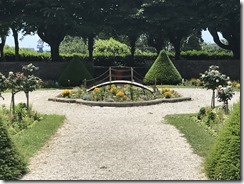 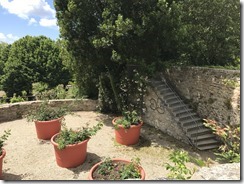 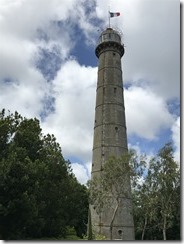 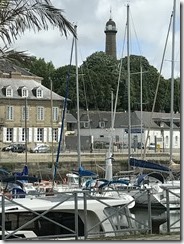 After the Cote d’Azur, this is France’s most popular resort area.  Many people come here for the beaches, clliffs, rock formations and offshore islands and islets.

We have a sea day tomorrow, then we will have 3 days in Ireland! Another time change tonight.

This entry was posted in Europe, June, World Cruise 2. Bookmark the permalink.