Whenever the captain comes on the intercom and it is not noon – when he makes his daily update announcement, we have learned from previous cruises that it is not good news.  So when we heard his voice, we waited to hear about an inevitable port cancellation. And indeed, we wouldn’t be going to our port in Punta Del Este, Uruguay. The port officials reported that it would be too windy on Saturday and it is a shallow port that we must reach by anchoring out and taking the tenders in to shore.  So, we had an overnight in Montevideo with two days there instead of one.  The friends who have been on this ship for the segments before Buenos Aires said they couldn’t get in to that port then either. And our guide, Martha, said it happens pretty frequently. The ship then offered a tour to Punta Del Este but the bus ride would be 2 1/2 hours each way, so we decided to spend both days in Montevideo.

First, some updates.  There is an alumni group here from Penn State!  So far, no one we know but who knows.  Chambersburg readers, that is for you.

Second, I  mentioned that in Argentina, they pay for real estate in American dollars. They do not have mortgages due to the fluctuation and instability of their currency. So people pay for homes, condos and apartments in cash when they buy.  Pablo told us about his parents who were selling one condo and purchasing another. They sold the first one in the morning for $66,000 and had to carry that money around in a backpack all day until they could close on the one in the afternoon.  He said nothing like carrying your home around on your shoulders! They were very anxious all day.

Now about Uruguay.  It is a country of about 3 million people and half of them live in Montevideo. Compared to Argentina where we were constantly told to watch our valuables and not wear jewelry, Montevideo was very safe and it is a much more stable country than Argentina. They have not had the coups and dictatorships nor the instability here. It is a city of parks and a lot of colonial architecture.

We had breakfast to the sounds of a military band – not sure if it was for us, but it was nice. 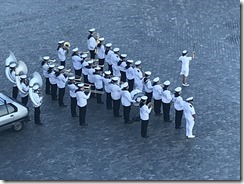 Then, we went on a city tour, our guide was Martha. She covered everything from the history to the price of eggs!

We toured the Old City and the beautiful waterfront area. There are lots of monuments, the most famous one is of Jose Artigas who is the national hero. 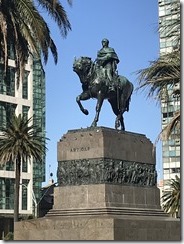 We visited several beautiful parks and saw the European influence on the city – the buildings, fountains, sidewalk cafes and parks are really lovely. 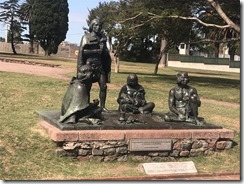 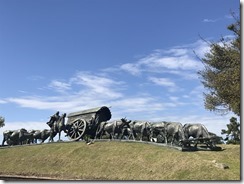 The city used to be walled in but the walls were torn down and all that remains is this gate.  The next photo is of the theater and it is a highlight for the people here. Performances are kept to low prices (about $6 average) so that people of all income levels have the chance to experience it.

We visited the spectacular legislative palace which was designed by the Italian architect Victor Meano – he won the international contest convened for its design.  Unfortunately he died suddenly soon after and another contest convened and Varela from Uruguay and Banchini from Italy won that one. The building was finished in 1925.  There are almost 50 kinds of marble in the building, all from Uruguay. 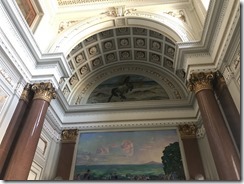 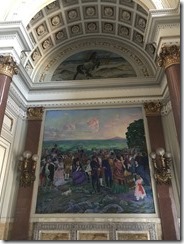 Some other facts from Martha – trees are protetcted here and there is one tree for every three residents! You must vote or pay a large fine.  There is 8% unemployment and 9% inflation. Health care is free but if you want private care, there is a fee of about $30/month.

People love Mate tea.  They mix it like a pulp in a gourd or gourd like container and drink it through a metal straw that has a screen at the bottom. You see people with thermoses full of hot water carrying both containers around. I found it horrible, but that’s just me. 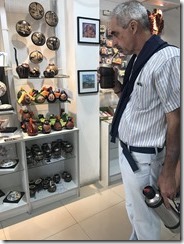 Beautiful weather, as you can see, we had some nice walks and a great dinner in Red Ginger, the Asian restaurant on board before the show – Salvatore Hasard who is a singer and multi instrumentalist.  Very enjoyable.

We took a long walk on La Rambla which is the longest continuous sidewalk in the world.  It runs along the Rio de la Plata and continues down the entire coast of Montevideo for 13.7 miles. It has been proposed as a World Heritage site. 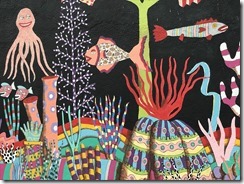 The mural above is on this whole building – here is a panorama for perspective, although you cannot see the beauty. 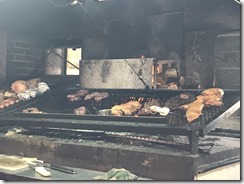 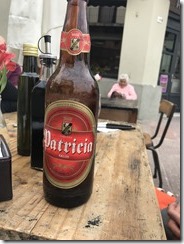 Of course I made some purchases! 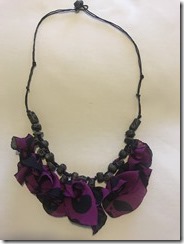 And here are some of the local children. 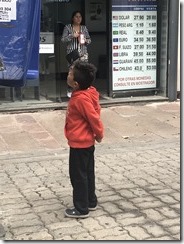 They were filming a commercial in the park.  We kept getting in the way of the extras.  They were lifting a little boy with bubbles all around.  This is as close as we could get, but it was fun to watch. All in all, a wonderful visit. 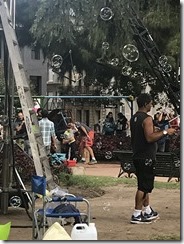 On the way out of the harbor, we saw what looks like a boat graveyard! 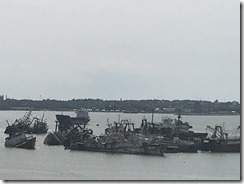 On to Brazil tomorrow.  The Brazilian country has a tax of 25% on anything you buy on the ship while the ship is in Brazilian waters, which it will be until April 14.  So we won’t be buying anything. We got our wine package already.  I think the shops will be very empty.