Last night we were invited to dinner with Thierry Tholon, the General Manager, and Alex Norton, the Oceania Ambassador.  We had two other couples at our table, one from Australia and one from Vienna. We had a great time, a fun discussion and a dessert that I didn’t have on either world cruise but that Rudy, one of our tablemates, highly recommended.  So I tried it and oh, my!  It is called iced cappuccino parfait.  Yes, that cup is made of pure chocolate.  Yum.

Today, we arrived in the city of Rio Grande at 10 AM. We had a tour with Andres.

This city is on the southernmost tip of Brazil and shares a border with Uruguay. The population is 200,000. Brazil was the last country to abolish slavery in 1880. All of the materials we saw ahead of time warned us that “the city has some interesting features that world travelers may find of interest, the tourist infrastructure is limited and may not appeal to all of our guests.” Well, we have been to West Africa so we were prepared. Actually, as we got on the bus, we saw that it had wi-fi!  This is not the case in most places – so it was not quite in keeping with what we expected.But the town itself is pretty run down and most shops, etc, were closed since it was Sunday.

We first visited the oceanographic museum.  They have a whole display of their scientific work in Antarctica which was interesting because it was in 6 different shipping containers which was a good use of them.  Unfortunately all of the information was in Portuguese, but the photos were interesting. 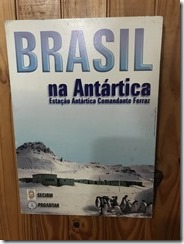 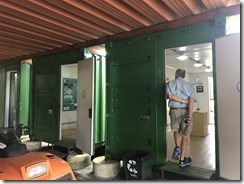 The other two parts of the museum included displays of many shells and then an outdoor area with penguins and a huge sea lion. 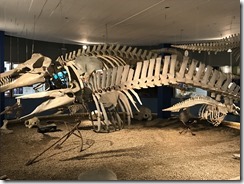 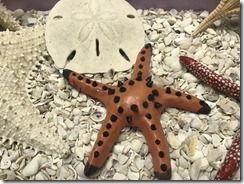 Norm got up close and personal with the moonfish. 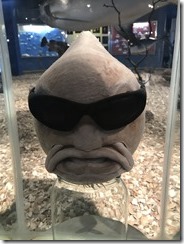 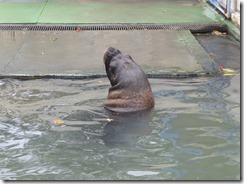 We went on into the town and saw the Alfandega, the Customs House, which was built in 1879 and now houses a museum. 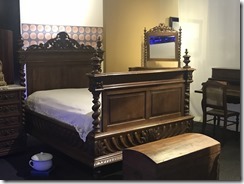 We then had a walk through town and one of the entertaining (but scary) things was that a group of stray dogs followed us everywhere and chased cars and motorcycles with a vengeance.

Our guide Andres is also a veterinarian and he said that the dogs were attracted to him!

Some of the sights around town were the fish market, some of the boats and some colonial buildings including the city hall and the former military headquarters (in Latin on the building it says – to achieve peace, you must prepare for war”. 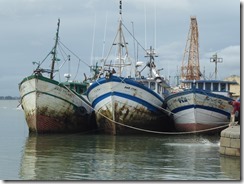 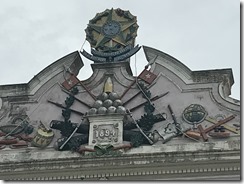 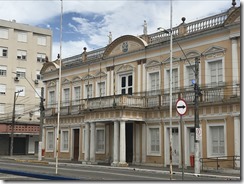 We visited the museum of Sacred Art of the St. Francisco which holds many pieces from the legacy left by the Jesuits.  And at the back of the same building is the Cathedral Sao Paolo. 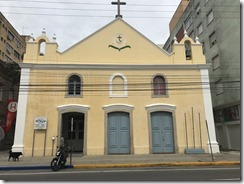 The first picture here is the liberty monument, given as a present from Italy. The next was a present from Japan, representing 100 years of immigration from Japan.  Most of the population are immigrants from all over the world, while Brazil was settled by Portuguese, there are many Europeans here, a lot from Germany. 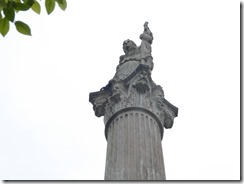 After an interesting day, we returned to the ship.

and I went to the movie “Stronger”. We are having dinner in the Tuscan Grill tonight, looking forward to that.  Tomorrow we have a sea day and the next day we go to Porto Belo Brazil.