We had a great dance party under the stars and moon last night. The ship’s entertainment team sang and we had caipirinhas which is the national drink here.

This morning at breakfast, the bunnies appeared! And there is also a chocolate pirate surrounded by jelly beans and chocolate eggs. No, Norm isn’t eating the chocolate for breakfast! 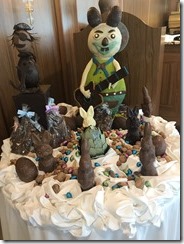 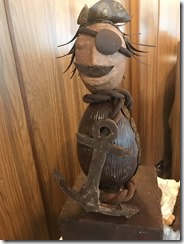 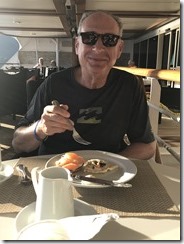 We arrived at Ilha Grande – it was not too far from our last port – and we arrived about 7 AM.  It is an anchor port again, but this time it is only about 10 minutes to the dock instead of yesterday’s 40 minutes.  We were lucky that the schooner picked us up at the ship yesterday!

Ilha Grande is located off the coast of Rio de Janeiro state,  It was first used as a leper colony and then a high security prison for some of the most dangerous prisoners in the Brazilian penal system.  It was closed in 1994.  Today about 10,000 people live here and 1900 in the largest village on the island – Vila do Abraao where we arrived by ships tender. 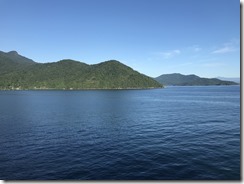 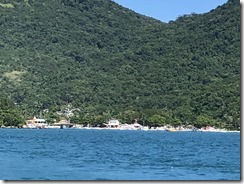 Now the island has beautiful beaches, a rainforest which is protected as a state park and just a few other settlements on the island. The town of Abraao has a lot of guesthouses, bars and restaurants.  No cars are allowed in this town either so all transport is by foot or boat.

We took a schooner for another snorkeling trip, the first to a spot called the Blue Lagoon.  I guess there are a lot of places named that! Here we are with a group of our friends – Tori and Bill and Shelley and James. 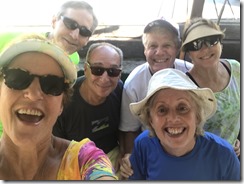 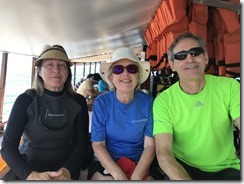 And here is our tour guide. 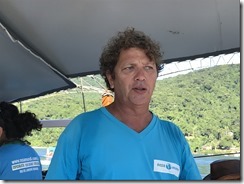 The lagoon was clear and beautiful, lots of fish, including cuttlefish which I had never seen before. And one he called viciona which looks like a mottled bat with sort of wings that spread out and also some front fins that they use to dig.  I did have my gopro but for the life of me I can’t figure out where the pictures are.  Have to get better at using it.  It is waterproof and I have an extension – I took videos but of course I can’t post those from the ship.  So you have to take my word for it!

We enjoyed delicious fresh pineapple on the boat as it was about an hour trip to get to the first spot.  Then we went to Praia de Fora beach where the snorkeling wasn’t as good but the beach was beautiful. And almost deserted. There is an old church at this spot. And here’s Norm looking out of the boat waiting for me.  I think the name of the boat describes the day perfectly. 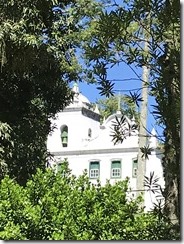 Before returning to the ship we walked around the town and into the small church where the statues were all covered because it is Good Friday.

Here is what the telephone booths look like in Brazil.

And because there are no cars, deliveries are made by carts like these. 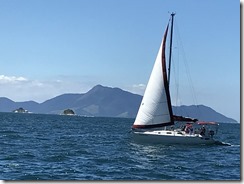 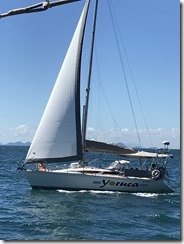 Tonight is the first night of Passover and our friend Tom Holloway is leading the service.  The restaurant manager thought that perhaps 20 would sign up, but there are over 100 and we will take over the larger half of the Terrace cafe for the dinner.  Many people are going to see what a seder is – they like to experience everything – so not all will be Jewish.

Tomorrow we will go to Buzios.  We don’t have a tour scheduled but one of the passengers from Rio said we don’t need it, the town is very accessible and walkable.