We left the Hyatt Regency in Kathmandu this morning after an early breakfast.  Here’s the view from our room. The red and yellow building is a monastery. 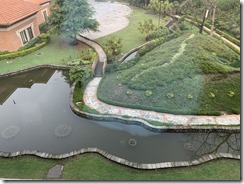 We were traveling business class to Paro Bhutan and so we had access to the executive lounge, a good place to wait for our flight. The check in and immigration was relatively quick and we had a couple of hours before the flight. 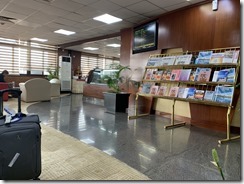 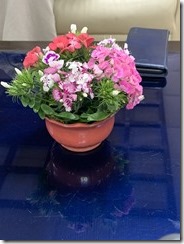 Once we started on the flight, we realized that the Himalaya mountain range was visible from the other side of the plane, so Norm kept getting up to get these shots. Just spectacular.  An additional shot of Mount Everest is the last one, taken by someone on that side of the plane and shared with us. 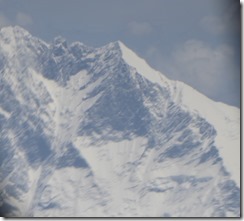 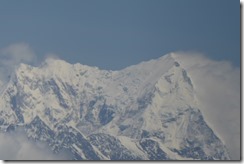 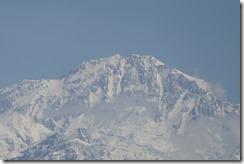 Paro airport is known to be the most dangerous landing in the world. It is in a valley surrounded by mountains that are 18,000 feet high. There are only a few select pilots that are certified to land here and the flights are only allowed under visual meteorological conditions and only from sunrise to sunset.  It was thrilling to be sure! 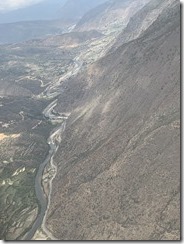 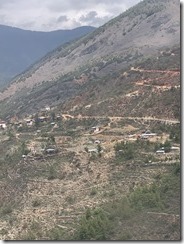 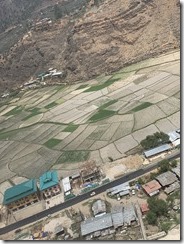 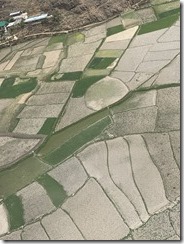 Our Bhutan visa papers were checked in Nepal so there was a typical immigration check here which was very quick.  It is a pretty small airport with only two airlines.  Ours was Druk Air which is owned by the Bhutan government. There are 3 other airports in Bhutan but this is the only international airport.

We were met by our guide, Tashi and our driver Kinley. Here is what the airport looks like. 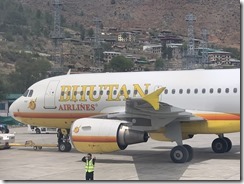 We set out for the capital city of Bhutan, Thimphu.  The trip was about 90 minutes and we made several stops. On the way, Tashi gave us lots of information about Bhutan.  He also welcomed us with the traditional white scarf (Tashi Khada) and said what a privilege it is to have us visit.

Bhutan has only been open to outsiders since 1974 and only got television and phones in 1999. Now the country is quite modern in this infrastructure.

70 % of the country is covered by forests.

Their only exports are fruits, wood and electricity.  Hydropower is the main source of income and tourism is second.

All tourists must pay US$250 per person per day ($200 in the off season)  with a US $40/30 surcharge per person for us since we are in a group of one/two. This covers accommodation, transport in Bhutan, a guide, food and entry fees. Their motto is high value, low impact (on the country). 30% of this money goes to free health care, free education, poverty relief, and infrastructure for Bhutan’s people. And it shows!

I read about the happiness index and asked Tashi about it.  They are known as the happiest country in the world and in fact measure the  Gross National Happiness Index. The phrase ‘gross national happiness’ was first coined by the 4th King of Bhutan, King Jigme Singye Wangchuck, in 1972 when he declared, “Gross National Happiness is more important than Gross Domestic Product.” If people are happy, GDP will increase too.

There is no immigration at all here. Many people from India (they have a good relationship with India and those visitors do not pay tax) come to work on projects here but must return to their home when the work is complete.

Smoking is not allowed and there is a huge fine if you are caught. There are small signs everywhere about health and safety.  I told Norm they kind of reminded me of the old Burma Shave signs which he said he never saw in person since he grew up in NY and they never had a car! 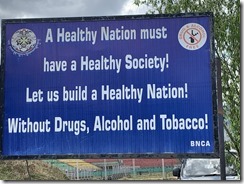 This is an earthquake area and no buildings are more than 6 stories high.  They are mostly built of wood and mud to withstand any shaking. Here is an example of a small one.  In the cities they do use different construction for the bigger apartments and businesses.

We stopped at an ancient temple with an iron bridge that has been there since the 15th century.  It was built by a Tibetan saint and engineer who supposedly built 108 (the holy number) of iron bridges throughout Tibet and Bhutan.  Here it is with the stone entrance – no one can walk on it now but up until a few years ago you could. They have build another suspension bridge to get you over to the temple. 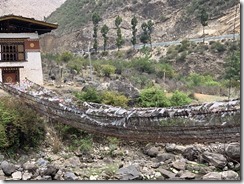 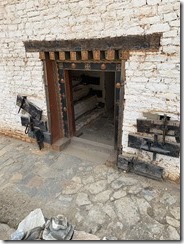 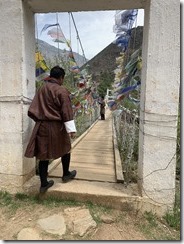 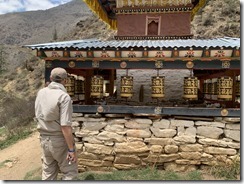 The prayer wheels, which we also saw in Nepal, contain 1 million of the prayer that is written on the outside, so if you spin it once it is like you prayed 1 million times.  The small white stupas (Tsa-Tsa, pronounced with a silent T– yes, Tashi spells everything for me) are seen everywhere, in the rocks along the road, and near prayer wheels like these. They represent prayers for another person, living or dead.  Sometimes ashes are incorporated. 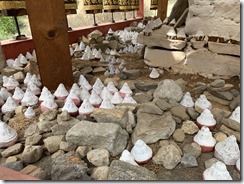 Here are Norm and Tashi and you can see the traditional dress. and here we are in front of the temple.

70% of the people here are Buddhists, the rest Christian and Hindu.

The national language is Dzongkha but everyone learns English starting in primary school.  Tashi and Kinley speak
English perfectly.

When we arrived in Thimphu, we drove down the main street and went for lunch to the Peace and Harmony restaurant.  I am going to love the food.

It is the first time I tasted fiddlehead fern.  Delicious.

You will see that a symbol widely used in Bhutan is the penis.  They say you never forget your first one!! Here are two in the restaurant.  I will see what Tashi says about it – but apparently the symbol dates back to a 15th century lama.  I will try not to overdo it with this in the posts but it does present a certain fascination!

Archery is the most popular sport here, and after lunch we went to an archery match.  This was like nothing I have ever seen before – the distance to the target is 150 yards – 1 and a half times the length of our football field – incredible!  They use bamboo bows. When an arrow hits the target they gather and do a kind of chant and dance!

After the archery we had a walk through town.  There are no traffic lights and everyone must cross the street at the crosswalk – they call it the zebra crossing because of the stripes! The car traffic is directed by an officer in a booth. The clock tower in the center of town and all of the buildings are just beautifully painted in Bhutanese style. 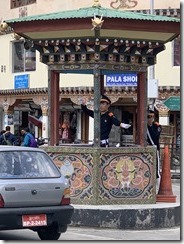 Norm went to a money changer and when he asked Tashi to be sure  he got the right amount (about 69 Nigultrum to 1 US dollar), Tashi said that no one counts money here, everyone is so honest!

We are staying at the Ramada hotel and will be sightseeing in this area tomorrow.  Stay tuned!

1 Response to Paro and Thimphu, Bhutan